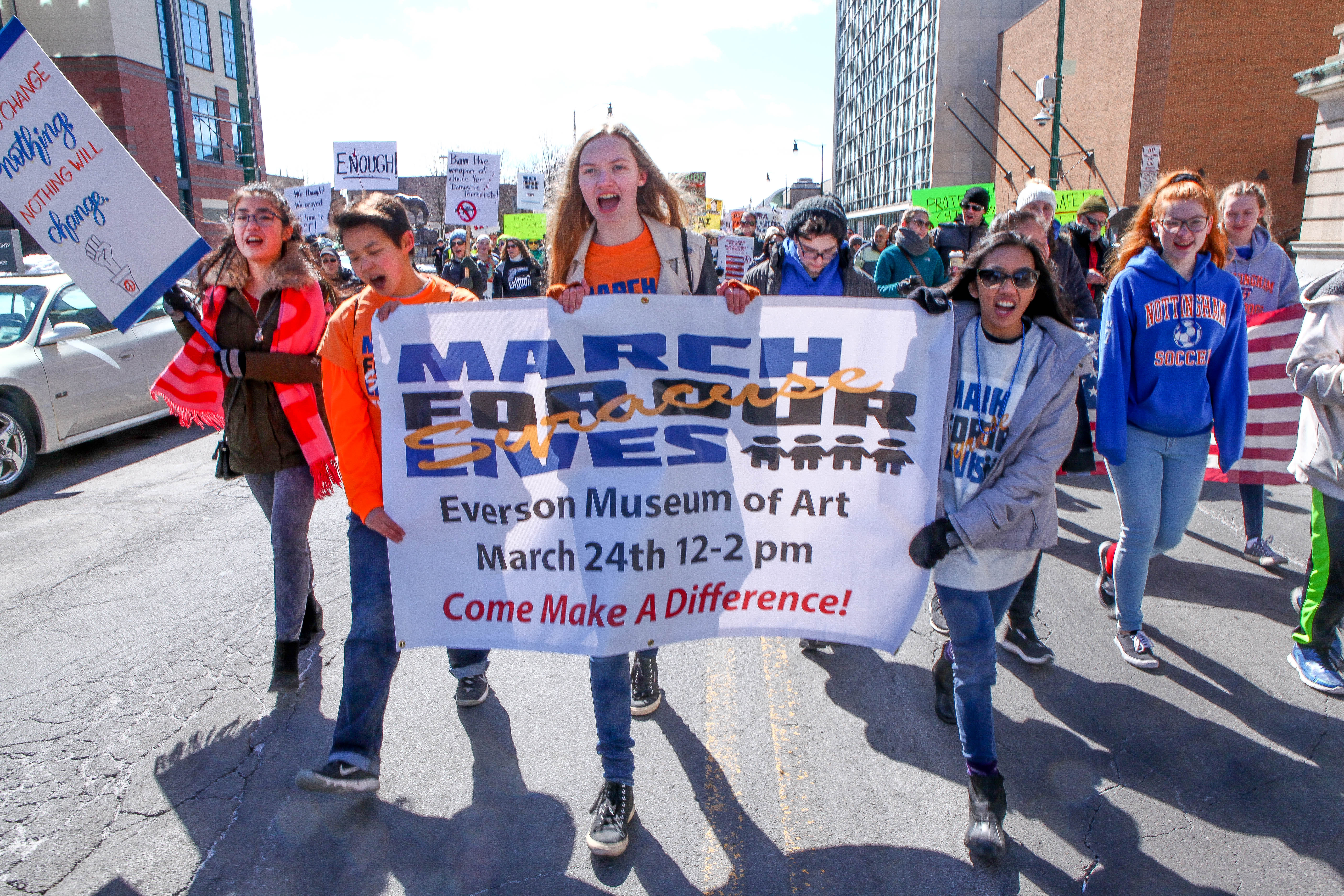 Neal was among at least 1,000 people at the March For Our Lives Syracuse rally on Saturday, March 24. Up to twice as many people marched from the Everson Museum of Art to the James M. Hanley Federal Building Plaza beginning at noon. The local march was among more than 450 marches across the country, organized by teens too young to buy beer or vote, but outraged by gun violence that has hit nearly 100 U.S. schools since the Columbine massacre in 1999. Students hold signs with the cryptic question, “Am I next?” at the March for Our Lives rally on March 24, 2018. (Photo by Michael Davis).

“I’m hoping things do get fixed before I vote,” Neal said. “I don’t want to be scared for two-plus years. I shouldn’t be nervous to go to school.” Her sign promoted a warning that many marchers and speakers shared: “Today my voice. Tomorrow my vote.” Christian Brothers Academy seniors Virginia Nash and Jessica Fellows also described shooting threats and “shooter jokes” at school. “Any kid that is considered weird, people say, ‘Don’t piss him off. He’s gonna be a shooter,’” Fellows said. The pair said mental health and bullying play a role, but they’re frustrated with mixed messages about how to talk about students who exhibit troubling behavior.

Arming teachers, they say, is a bad idea. “All you have to do is take the gun from them,” Fellows said.

They scoffed at the solution of one Pennsylvania school: buckets of rocks in all classrooms. CNN reported that Blue Mountain School District in Schuylkill County, Pa., encourages students to throw pencils, staplers and rocks at potential shooters “rather than wait passively” for them “to attack.”

“Kids are dying left and right,” Nash said. “It shouldn’t be a risk to go to school.”

When Fellows heard about the Valentine’s Day massacre at Marjory Stoneman Douglas High School in Parkland, Fla., “I cried at first,” she recalled. “And then I was just mad. It doesn’t make sense that all these kids are dying, and the government is doing nothing.”

The crowd — one of the largest in recent memory at a Syracuse protest — echoed her outrage. It took about 25 minutes for marchers to travel from the State Street museum to the Washington Street federal building plaza. Along the way, they chanted “Hey, hey, ho ho, the NRA has got to go” and “Hey, hey, NRA, how many kids did you kill today?” A sign directing people to a prayer ahead of the noon March for Our Lives rally in downtown Syracuse. (Photo by Michael Davis)

A group from the Episcopal Diocese of Central New York, which held a premarch vigil at St. Paul’s Church, sang, “We Are Marching in the Light of God.” The South African folk song is associated with the anti-apartheid movement.

“This is a moral imperative,” said Bishop DeDe Duncan-Probe. “The church needs us to be at the forefront of the issues. We’re standing for the youth. This is where Jesus would be.” “They’re leading where others have not,” he said. “I’ve got their back.”

Some marchers carried signs criticizing President Donald Trump and Republican Rep. John Katko. One sign called for Israel’s departure from Palestine. Others — held by children, adults and people in wheelchairs — targeted the issue of the day: reforming gun laws to keep schools safe for students. “Protect Kids, Not Guns,” read one. Other signs included “Down with Guns, Up with Grades,” “Books Not Bullets” and, chillingly, “Is My Child Next?”

It was the first march for Jamesville-DeWitt High School sophomore Riya Sharma. “I believe all kids deserve to have a future,” she said. “It’s our time to change it.”

Kate Eichelberger of Solvay brought her children, Maggie, 3, and Gus, 5. “I was in eighth grade when the Columbine shooting happened,” the former teacher said. “He’s in Pre-K now. Why am I still worrying about this? Nothing has changed.”

She rubbed her eyes, full of tears. As a teacher, “I used to tell my students, ‘I would stand between you and a gunman, don’t worry.’ Why should I have to?”

Lauren Hibbard, a Fayetteville-Manlius High School senior, favors stricter gun regulations and disapproves of arming teachers. She carried a sign that read, “Trump sits at a disco party he threw after meeting with Parkland victims for 14 minutes.”

“I’m here to make sure this doesn’t happen in our local schools,” Hibbard said. “When I first heard about Parkland, it was so regular: another shooting. That’s just sick.”

Amanda Gardner held a sign listing the names of the 17 people killed in the Parkland massacre. “I came for the kids that were taken last month,” she said. “It breaks my heart. I’m tired of sitting on the couch feeling helpless.” A man holds a sign with photos of his young grandchildren. The March for Our Lives rally struck a cord with parents and teachers. (Photo by Michael Davis).

Obni Afriyie, a Syracuse University senior studying education policy, called the youth-organized rally “just beautiful.” Afriyie, who is black, sees as valid the critique that shootings in urban and minority communities tend not to draw as much attention as those that take place in wealthier areas, like Parkland and Newtown.

“There are other issues in city schools where so many are living in poverty,” he said. “Shootings happen in inner-city schools all the time. They have metal detectors. There’s violence. It’s a way of life.”

Those complex racial and economic issues require discussion, Afriyie said. The bottom line, he said: “No child, black or white, should be afraid in school.”

Renée K. Gadoua is a freelance writer and editor who lives in Manlius. Follow her on Twitter: @ReneeKGadoua.