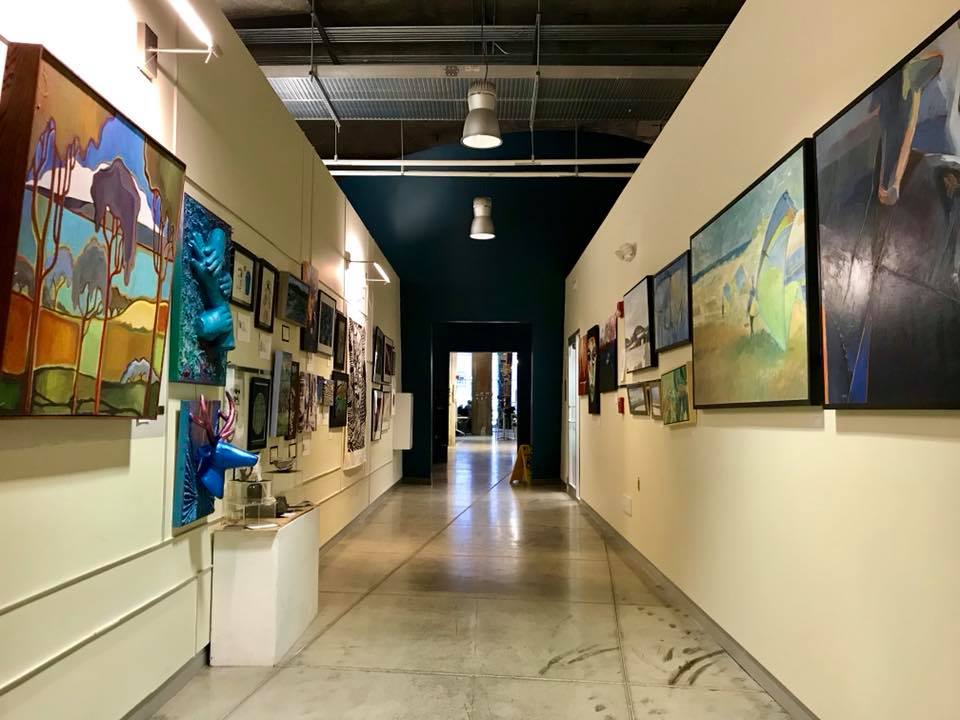 The huge group exhibit 2018 Public Arts Task Force (PATF) Snow Show starts with a roster of 55 artists and a portfolio of 175 artworks. It operates with a wide-open format and embraces various media, styles and influences. The exhibition sprawls up and down the hallways of the gallery at the Tech Garden, 235 Harrison St.

Among other things, Snow Show displays works with a sense of place. Eva Hunter depicts Fat Bottom Pond in the Adirondacks, and Christian Day portrays Pleasant Valley Farm as well as a nearby road and forest.

Sanlly Viera has created several pieces referencing either downtown Syracuse or streets on its edge. They aren’t realistic but interpretative. In one work, the artist plays with light and darkness. In another, he captures a downtown scene inhabited only by a couple walking down a street. A third highlights a fire hydrant, demonstrating Viera’s ability to transform an ordinary object.

Urban art in Syracuse appears in Thaddeus Malley’s photographs, which depict a sculpture by Tash Taskale, a mural by “Diane O” on the side of a Grant Avenue flower shop, and a graffiti piece, “Out of Brain Cells,” at 215 Tully St. The images both document and celebrate the phenomenon of urban art.

Moreover, the exhibit integrates diverse styles. There are acrylics such as Jamie Becker’s “Rebirth,” A. Blakely Bailey’s “Serenity,” with its rich mix of blue, orange, red and green colors, and Kelsey Vierow’s vivid portrayal of a winter sunset. They coexist with “Time and Patience,” a whimsical mixed-media collage by Brandon Hall. It encompasses a clock, a man with a giraffe’s head at the top of a stepladder, and two human figures with bird’s heads.

Snow Show displays Penny Santy’s oil featuring blue colors and a view of a cow’s head, Ryan Wood’s digital illustration depicting a cello, and several of Dan Shanahan’s absurdist, insightful works such as “Derecho Express” and “Slurptown.” And Tino Lopez goes big and bold in works like “Bella Muerte,” which includes a female figure, a text listing sins such as lust and greed, and an admonition: “think upon your sins.”

There are only a few sculptures on display, but they definitely merit extended viewing. “Protected,” a terracotta work by Judy Lieblein, positions a bird on top of a woman’s head. Mary Stanley’s “Do This in Memory of Me: Last Supper,” a tableau, combines a table and chairs plus five figures, two human and three birdlike.

This successful exhibit results from a partnership between the Adapt CNY, which needed a venue for the 2018 edition of Snow Show, and the Tech Garden gallery, which needed to fill the initial exhibition slot for this year. Their collaboration led to a show that’s large and incisive, that sweeps in artists relatively new to town and some that have exhibited their work many times at Syracuse venues, and that welcomes different modes of artistic expression.