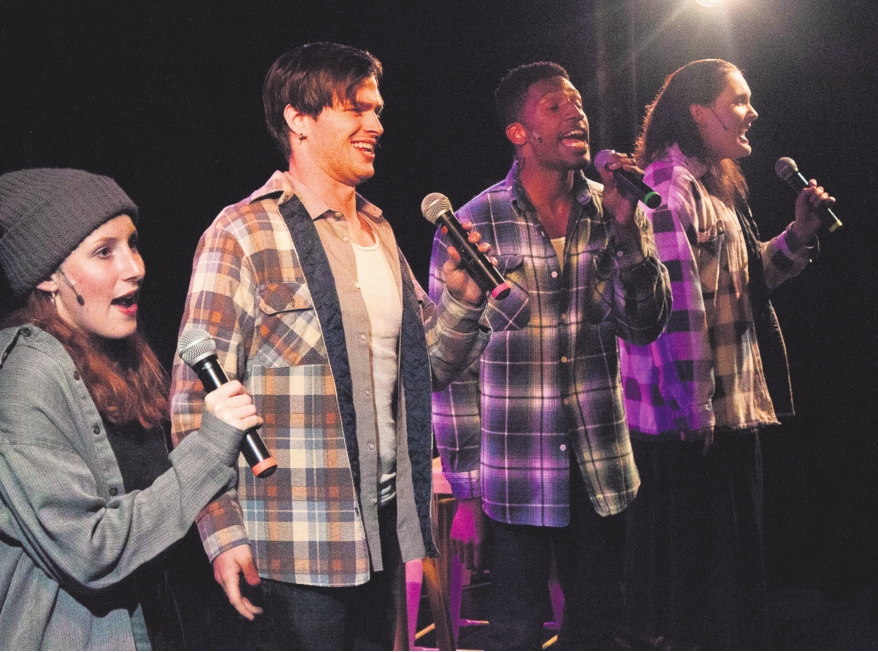 Songs for a New World, which begins the new season at the Redhouse Arts Center, was first performed in 1995 when Brown was 20.

Composer-lyricist Jason Robert Brown speaks in a lush, distinctive voice, but sometimes we have to be jogged to distinguish him from other Jasons and other Browns. In the passionate niche market for contemporary inheritors of classic Broadway, Brown is one of the hottest young talents around. He won a Tony Award for the score for Alfred Uhry’s lynch mob-themed Parade, and his autobiographical The Last Five Years, a show in which one singer reverses the time sequence of the other, has appeared several times locally.

Songs for a New World, which begins the new season at the Redhouse Arts Center, was first performed in 1995 when Brown was 20. The show has attracted a cult following; its first director, Daisy Prince, described it as a “very theatrical song cycle.”

Getting a handle on Brown and Songs for a New World is trickier than that. Although Brown has sometimes been compared with Alan Menken, and many numbers evoke a kind of cabaret-piano bar intensity, he also favors a non-showy allusiveness to classical music, pop, gospel, jazz and even Kurt Weill. Then again, all the music, even though written at different times, was meant to be performed together and in this order. The “New World” of the title might possibly refer to the anniversary of Columbus’ voyage, three years before the opening, and cited in the second number. Four singers project from comparable emotional positions but do not represent continuing characters.

Across the 19 musical numbers there is plenty of urban angst and disappointment, as well as irony, but sometimes, as in the opening sequence, “The New World,” the tone is as upbeat as an item in the cheerleading Up With People. Most numbers, while not being ballads, are set midway in a running narrative, without telling a complete story. In “On the Desk of a Spanish Ship, 1492,” we encounter not explorers but (unhistorically) migrants filled with fear, cracking planks beneath their feet, and crying out for faith and strength for a new beginning. Stephen Sondheim uses the fancy word “diegesis” for lyrics implying stories longer than we hear.

Like other post-Sondheim composer-lyricists, Brown expects that his words will be clearly articulated and that audi ences are paying attention. Take, for example, “The Stars and the Moon,” perhaps the best-known song in the show, in which a woman sings of rejecting the extravagant claims of a successive suitor, filled with specific references: “married in Spain,” “honeymoon in Beijing,” visits to Nice and Paris. Then again, one couplet reads, “I’ll give you cars and a townhouse in Turtle Bay/ And a fur and a diamond ring.” Turtle Bay? Yes, the tony brownstones on the east side of Manhattan, but how much else are we supposed know? Maybe it’s a coincidence that Sondheim lives there.

Co-directors Stephen Svoboda and Danielle Melendez have selected four singers from recent Redhouse productions. Soprano Becca Orts as the aspiring Woman 1, Antonio Tillman as the urban and sometimes edgy Man 1 and Kody Bringman as the often romantic Man 2 were all in last month’s Shrek: The Musical. Mezzo Rebecca Flanders, the often earthy and witty Woman 2, was memorable in John and Jen (May 2012).

Discerning a sequence in the juxtaposition will put some audience members to the test. After the Spanish sailing ship, we segue to “Just One Step,” in which Flanders, in a comic Jewish accent out of a Neil Simon play, is standing on the ledge of a tall building, threatening to jump. Her song is addressed to her stingy husband Murray, whom she links with Maury Povich. Plucky Orts in “I’m Not Afraid of Anything” tells us about a man who appears to be in love with her but is not speaking of it.

Bringman is the gentlest of the quartet in the first act’s “She Cries,” about the hapless lover hoping to end a relationship but prevented by a flood of tears.

Tillman is a dominant voice in the gospel-themed “The River Won’t Flow” and concludes the first act with “The Steam Train,” in which the singer thirsts for fame and glory while escaping the ghetto through basketball. In “King of the World” he’s on death row, marching toward execution. The title phrase has since been sullied by director James Cameron‘s Titanic, and Brown more likely wants us to remember James Cagney’s defiant cry at the end of the 1949 movie White Heat.

Two songs approach Christmas from oblique angles. We hear about pregnancy in Orts’ “Christmas Lullaby,” but Flanders has the show’s funniest number is “Surabaya-Santa.” In what sounds almost like a quotation from Bertolt Brecht and Kurt Weill, she’s unhappy to be married to a self-obsessed husband who’s always distant: “And you watch Miracle in 34th Street/ You get sad and dreamy/ Can’t even see me/ Won’t even say ‘hello.’” Tim Brown’s lighting projects flashed thematic images above an oceanic horizon. Lisa Loen keeps putting each singer in new costumes, appropriate for new narratives. At the keyboard, music director Emily Croome ably leads her four-player ensemble through subtle shifts of tone and tempo but keeps the volume so high that all the powerfully voiced singers still need to be miked.

Murder Most Fun
Soldiering On
To Top