Five-year-old Jaeleen Mouillesseaux brought up the rear of the Syracuse Women’s March on Saturday, Jan. 19. Wearing a green T-shirt that read “This Little Feminist Has Big Dreams” over her winter coat, Jaeleen carried a small stuffed animal and skipped along the snowy sidewalks.

Her mother, Shannon Mouillesseaux, wore the words “Death to the Patriarchy” across her chest and held her daughter’s hand as they walked from the Everson Museum of Art Plaza on Harrison Street to University United Methodist Church, 1085 E. Genesee St.

The Syracuse duo were among about 500 people who walked several blocks to a rally at the church as similar marches took place in dozens of U.S. communities and at least 30 countries. 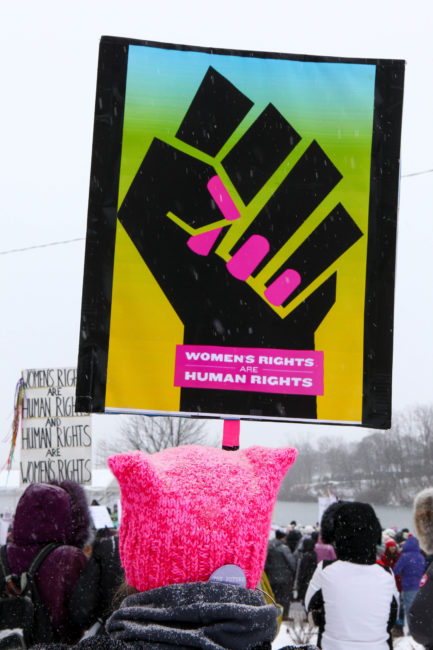 “People are pissed off and rightly so,” she said. “Black people, immigrants, women, LGBT, anyone who is not a straight white male is threatened. It’s 2019. It’s time for a change.”

She brought Jaeleen, she said, to show her “it’s important to stand up for people.”

Lynn Wiegand of Tully said, “it’s just gotten worse and worse” in the last two years. “There’s so much hatred and divisiveness and lack of accountability. I could go on and on.”

But she’s pleased with the unprecedented number of women elected to Congress in November, many with the help of women who became politically active after the 2017 march.

“I do think Hillary (Clinton) paved the way for all these women and a more diverse Congress,” Wiegand said. “I see these young women and young men and it gives me hope the next generation is going to be more enlightened.”

When marchers left the Everson Plaza, the temperature was 17 degrees, and the wind was brisk. Organizers moved the rally inside because of the weather. About 1,000 people marched in Seneca Falls, where Elizabeth Cady Stanton helped lead the 1848 Women’s Rights Convention.

In Syracuse, participants carried signs criticizing Trump. “I hate cold weather but I hate Trump more,” one sign read. Another alluded to Trump’s connection to Russia: “Who’s your Vladdy?” 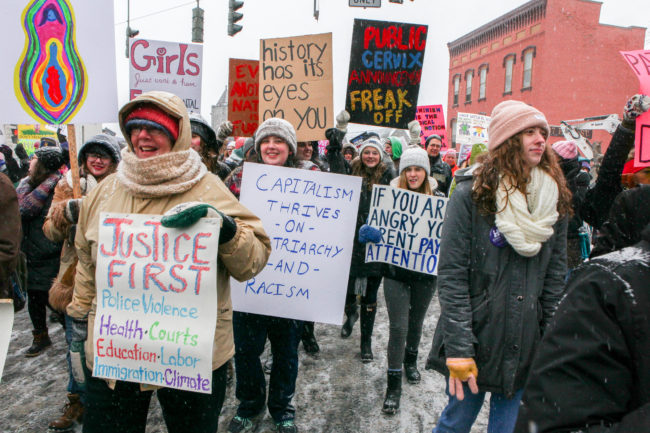 At the church, Nada Odeh, lead organizer of the Syracuse march, described how Trump’s policies have affected her family. The Syrian refugee graduated from Syracuse University in May, but her mother’s visa was denied and she was unable to travel from Syria. “She was hoping to be here for me,” Odeh said.

Mara Sapon-Shevin, an activist and professor of inclusive education at Syracuse University, addressed concerns about anti-Semitism and racism and lack of inclusion that have divided some Women’s March organizers.

“Everyone is welcome in this movement,” she said. “Even men. Not to run it, but to be a part of it.”

State Sen. Rachel May, a Democrat elected in November to represent the 53rd District, listed issues the Senate expects to pass now that it holds the majority for the first time in a decade. The Senate on Jan. 15 passed the Gender Expression Non-Discrimination Act (GENDA) bill and a bill that prohibits mental health professionals from gay conversion therapy with a patient under age 18.

This week, the Senate will take up the Reproductive Health Act (RHA), expected to pass easily. May campaigned on support for the RHA “to make sure that New Yorkers have protection in case the Trump Supreme Court overturns Roe (vs. Wade),” the 1973 Supreme Court ruling that legalized abortion.

“These are important and hard-won victories,” May said. “They’re worthy of celebrating and I’m certain there will be more.” 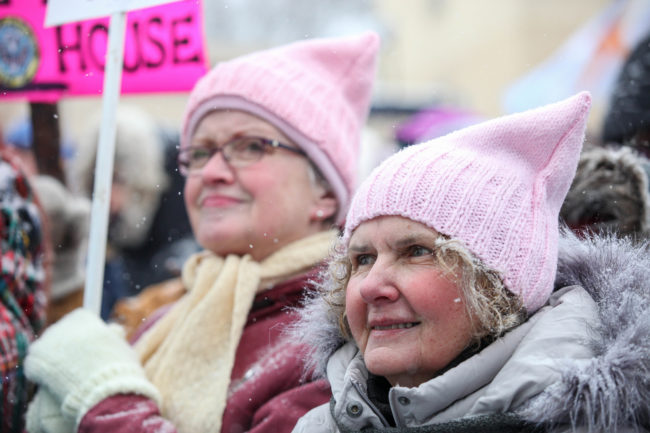 She pledged to confront climate change and environmental policies with global implications. “Many of the immigrant and refugees we have tried to welcome in recent years are fleeing wars or natural disasters not of their making but of ours,” she said.

Joe Driscoll, musician and 5th District Syracuse councilor, used his time to advocate for the community grid to replace the I-81 viaduct in Syracuse, noting the decision holds the potential to bring people together.

Then Driscoll sang Buffalo Springfield’s 1966 protest song “For What It’s Worth (Stop, Hey What’s That Sound).” “There’s something happening here. What it is ain’t exactly clear,” Driscoll sang, as the audience cheered and joined him. “There’s battle lines being drawn. Nobody’s right if everybody’s wrong…”