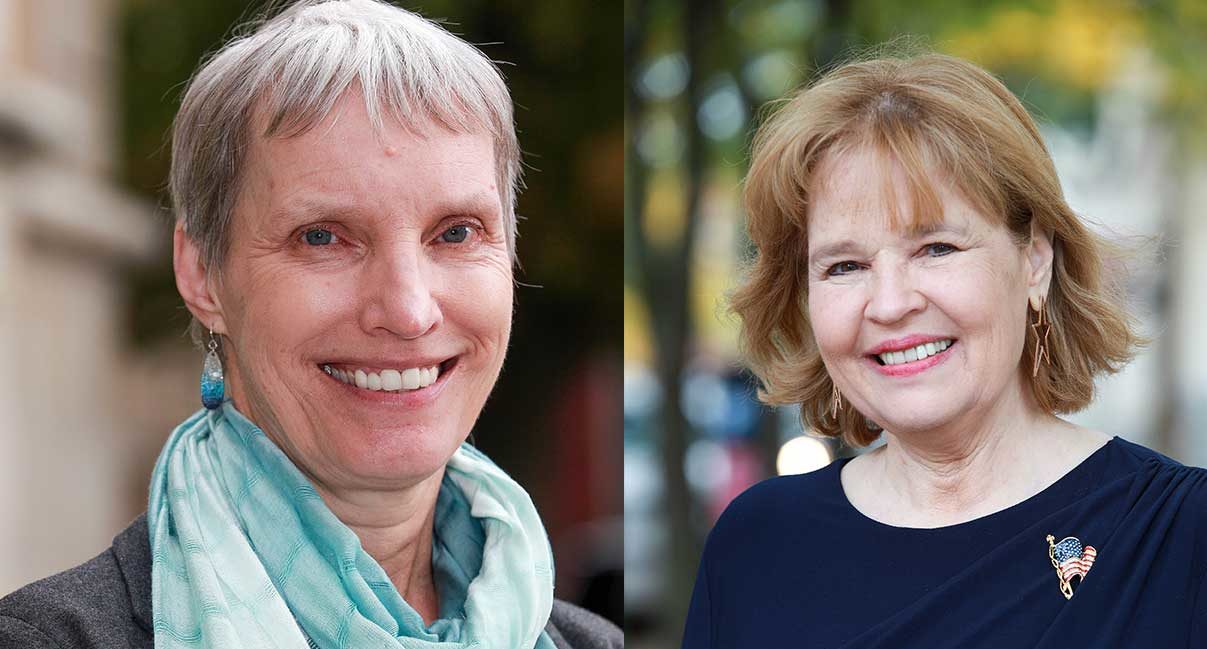 New York’s 53rd District is up for grabs this November. SNT talks to candidates Rachel May and Janet Burman about what they bring to the table.

Folks in the Rachel May campaign say they weren’t surprised that their candidate beat state Sen. David Valesky in the Sept. 13 Democratic primary for the 53rd District. But they’re quick to add that they believed that everyone else was.

Valesky had held the seat for 14 years, the last three two-year terms without opposition. He also held a leadership position in the Independent Democratic Conference (IDC), a group of Democrats who caucused with Senate Republicans to maintain a balance of power. The IDC had been dissolved recently under pressure from Gov. Andrew Cuomo, and May had secured an endorsement from the Working Families Party. But Valesky did not seem to feel undue pressure.

May’s victory may reflect the national trend of more women getting into politics following Trump’s 2016 election. Plus, her chances in November are buoyed by the 53rd District’s 40 percent to 28 percent Democrat dominance in voter registration, with 24 percent non-enrolled.

Republicans, however, should not dismiss the chances for another surprise. Their candidate, Janet Burman, is a hardened veteran of local political battles. A former chair of the Republican Committee of the city of Syracuse, she has made four runs for office, including Congress, the County Legislature, the state Senate and the Common Council presidency. She has publicly renounced pressure from GOP leaders to run a negative campaign.

How can we establish and meet public school standards for the state?

Rachel May: We’ve had a policy up to now of punishing schools that don’t meet standards, punishing teachers in those schools. We have to get all of our schoolchildren to the point where they are meeting the standards to become effective as adults, in jobs or other things they need to do.

Janet Burman: Syracuse’s public schools have failed to provide a quality education to many students. Graduation rates have been too low. Dropout rates have been too high, and far too often, students have been advanced to the next grade without making sufficient gains. Improvements have been made under our current school superintendent (Jaime Alicea), but significant progress is being hampered by a variety of constraints that have been imposed by the state.

Teacher creativity is being stifled by too much emphasis on standardized tests. We are not receiving an adequate share of state funding. The high percentage of students with individualized education plans (IEPs) appears to be ignored by the funding “formula.” Teachers are prevented from maintaining discipline in the classroom. And the curriculum is being dictated by the state.

How can we guarantee funding to set and meet those standards?

May: This is the key issue that schools need more funding. A court case decided that many districts in the state are underfunded, dramatically underfunded in some cases, Syracuse among them. It’s one of my priorities going into the Senate to make sure that the funding that the schools are owed is made available so that these districts, especially the ones that are struggling to meet the standards, are getting the full funding that they need in order to hire enough teachers, in order to have enough extracurricular support for students in terms of mental health care.

Burman: As state senator, I will fight for sufficient funding for our schools to enable smaller classroom size and more teachers’ aides to assist in addressing IEPs. I will advocate for greater control of curriculum at the district level; reducing state mandates; expanding vocational education; support for more “magnet” schools, offering concentration in science, technology, engineering, arts, and mathematics; and streamlining procedures for establishing charter schools.

Additionally, I will sponsor legislation to establish pilot programs for school vouchers in urban areas, empowering families with more choices for educating their children.

As a state senator, how can you engage the issue of urban poverty?

May: Urban poverty obviously is the billion-dollar question here in Central New York, and upstate New York in general. It’s not something with a single answer. It’s a whole constellation of answers. We can go back to the school issue, where students who are not being disciplined are building the prison pipeline.

The wider issue of poverty is a combination of housing instability, of lack of jobs that are accessible to people who live in impoverished areas and don’t have the child care, or transportation, or the documentation, or don’t have a permanent address. There are a number of underlying issues that need to be addressed at the same time. You need to make sure that if you’re trying to solve one part of the problem, you’re not making it worse somewhere else. I want to be looking at the system as a whole and bring a holistic approach to issues like poverty.

Burman: For four years in a row, Syracuse has been ranked as having the highest concentration of poverty in the nation among African-American and Hispanic populations. This is unacceptable and this has continued due to a lack of leadership. As state senator, I am willing to take the lead on this issue.

There is no shortage of concern in our community, and there is no shortage of talent and expertise in our community for tackling this problem. It requires a coordinated effort involving our mayor, county executive, Assembly representatives and state senators, along with the agencies, organizations and foundations that have the experience and knowledge to address the many aspects of poverty.

We have so many resources to bring to bear on this problem. This is the birthplace of the literacy movement. We have the wherewithal to address the literacy challenges of those in poverty. The Community Foundation is embarking on a major effort to address the lead problems in our community. We know that to receive training and to enter the workforce, reliable childcare is needed. Early intervention programs to support childhood health and development are proven effective.

In order to succeed, responsibilities need to be assigned to those in government, those in nonprofit agencies, and to those representing businesses and foundations. Then these individuals must be accountable to our community. I am willing to be held accountable for progress in resolving this problem.

What was the IDC and is it really dead?

May: The IDC was a group of Democratic state senators who chose to ally themselves with the Republican leadership, thereby giving Republicans control of the Senate even when voters chose Democratic majorities. All eight of them faced primaries this year and six were defeated. The remaining two plan to conference with the Democrats, so the IDC is no longer a factor.

Burman: The IDC embodied several ideas: the interests of areas of the state outside of New York City, bipartisanship, and fiscal responsibility. While the IDC has been dissolved, I hope there will be Democratic senators who recognize the importance of these ideas. My fear is that Democratic control of the state Senate will result in New York City-centric, partisan control, with too little regard for the concerns of Central New York and a lack of understanding that uncontained spending will continue to drive our children, our businesses, and us to leave the state.

How can you control corruption in state politics?

May: New York has some of the highest campaign contribution limits in the country and allows people to circumvent the limits by forming LLCs (limited liability company). We can lower limits dramatically and close the LLC loophole to reduce the hold that big-money interests have on candidates. I am in favor of going farther than that and instituting public financing of campaigns on the model of New York City or other models being tested successfully around the country. We also need to have an independent ethics review board, with greater transparency and time limits on reviewing cases and reporting on decisions.

Burman: The first thing I would do is sponsor legislation that prohibits campaign contributions from any entity or individual that does business with the state. This would eliminate an obvious conflict of interest.

I also support the Senate Republican measure to create an open database of state contracts. This would provide necessary transparency to the public as to who is receiving state contracts.

Term limits would help ensure that no one is allowed to accumulate the type of power and influence that is derived from longtime incumbency. And I would not allow any state official the power to award funds without strict and transparent adherence to bidding and contracting requirements.