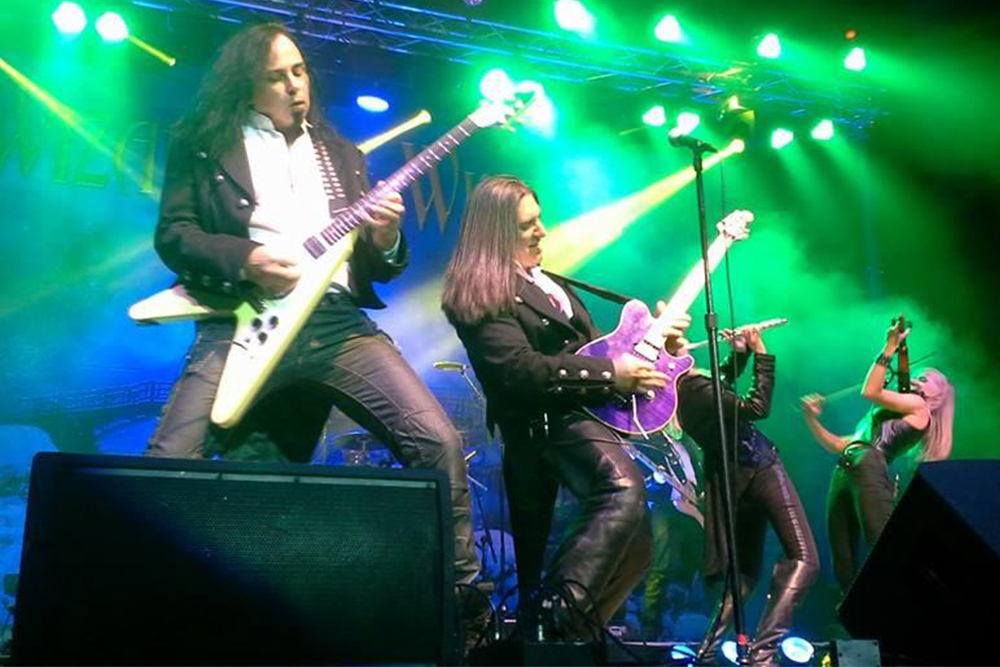 Wizards of Winter are paving their own path in the local music scene.

One good deed deserves its rewards, and the Wizards of Winter have seen their progression and popularity escalate rapidly in the last six years as a result. At first glance, the band’s name is strikingly similar to the Trans-Siberian Orchestra (TSO) tune “Wizards in Winter,” and this is purposeful. On Sunday, Dec. 27, the holiday-themed rock opera visits the Mulroy Civic Center’s Crouse-Hinds Concert Theater.

“We started off as a TSO tribute band, playing churches and high schools,” said Scott Kelly, the band’s keyboardist and musical director. Their start was similar to any popular band, but the venues they performed were small and particularly selective. In 2009, at the beginning of the economic recession, the concept came to fruition. Kelly and his wife, Sharon, wanted to get a band together to perform a TSO-themed show in order to raise money for a local food pantry.

Kelly was part of progressive rock bands prior to the fundraiser. He approached his business partner and the group’s bassist, Steve Ratchen, and he was interested in participating. The band was formed through networking, community and Craigslist outreach.

“People love the music,” Kelly said. “There was really no concept of being more than what it was at the time. It was one of those success stories that was unintentional.”

Through word of mouth and growing interest, the band became proactive and created original material, giving birth to their own rock opera, Tales Beneath a Northern Star. The name of the band was federally registered. In 2011, their first full-length album was released. In November of this year, their follow-up, The Magic of Winter, became available.

Wizards of Winter’s prog rock emphasizes the type of show audiences are to expect, falling in between Mannheim Steamroller and TSO. “We’re your ‘average guy’ kind of band. We provide a little bit of everything,” Kelly boasted. “Mannheim is for a more sedate audience. We still perform in an intimate setting, but we have less fire and less lasers than TSO.”

Although the set lists have changed throughout the years and waned away from TSO originals, Kelly and company still incorporate a few favorite songs into their live shows, not as a crutch, but to pay homage and emphasize the production. The keyboardist does see the TSO songs appearing occasionally rather than being expected.

Plus, for original TSO members-turned Wizards Guy LeMonnier and Tony Gaynor, the correlation is a trip down memory lane of their time with the noted holiday rock opera outfit.

The fantastical quasi-concept of the group’s music comes from Kelly’s celebrated nerdom. “I’m a big Doctor Who fan. He has a TARDIS (Time and Relative Dimension in Space), and it travels throughout space  and time, and that concept has been applied to Tales Beneath a Northern Star. We take you on a journey the night of Christmas Eve. With our Arctic Flyer, we travel into a snow globe in search of the true meaning of Christmas.”

Opposed to the TSO rock opera, the prog rock attitude gives the band initiative to change the set list nightly, giving fans a new show every time. Parts are melancholic, parts are happy and all of this is intended to give patrons a memorable live music experience

“Christmas goes beyond the religious connotations. It is about family, loved ones and friends. It’s also about giving back,” Kelly said. They still boast a philanthropic state of mind, and are supporters of the Wounded Warrior Project. Although they sometimes have to sacrifice their own Christmases, the Wizards family expands from core members and their families. The holiday doesn’t take away from personal obligations. The Tri-State area natives will also end this tour in the Northeast. Come the last Sunday of 2015, hopefully their first trip to Syracuse will be a snow-covered one.

“I think people find the production to be heartwarming and an emotional rollercoaster,” Kelly added. “People who have seen us over the past years have said that we’ve become part of their holiday tradition.”