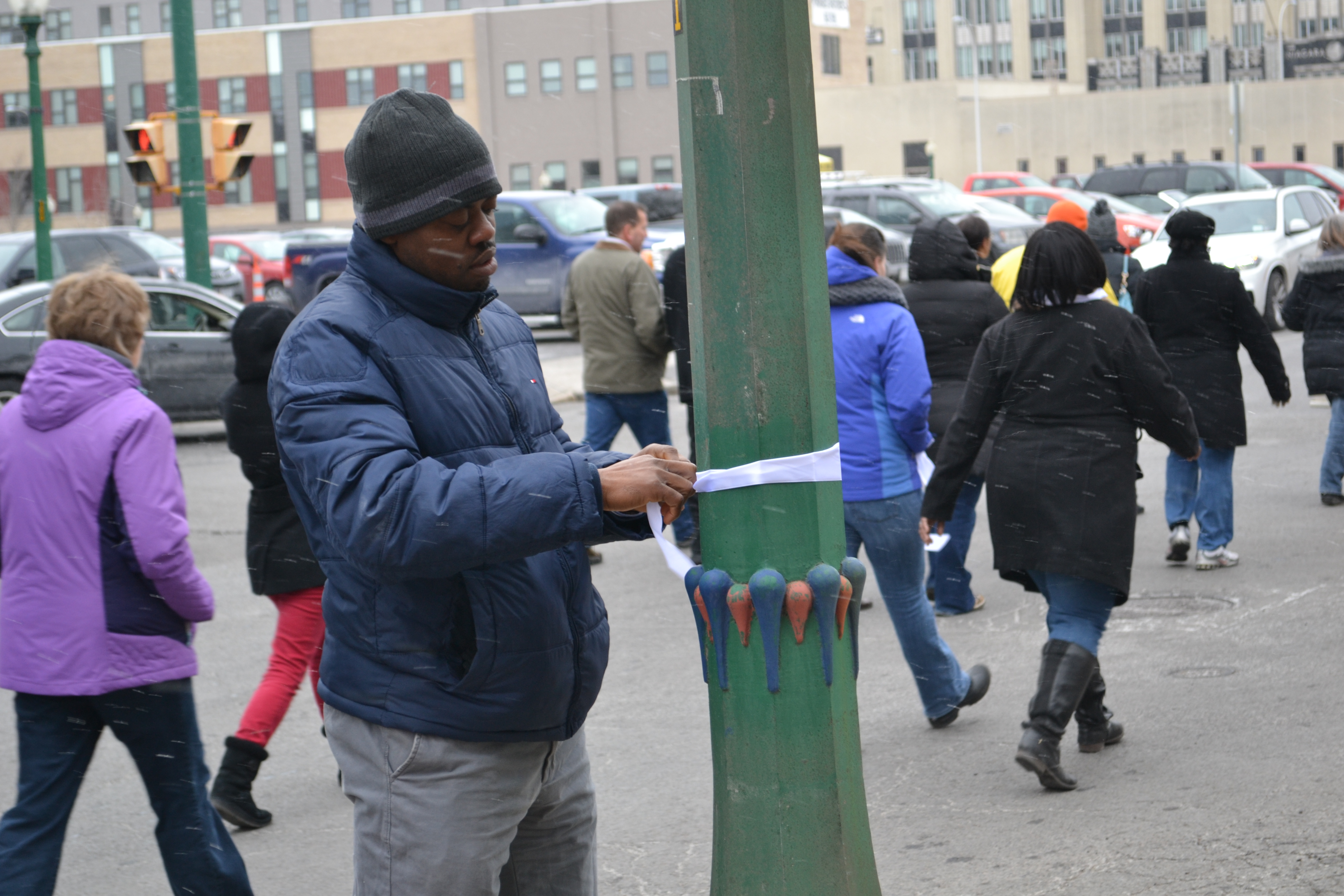 From March 20 – 29, Vera House leads the local effort to raise awareness about domestic and sexual violence.

Founded in 1977 by a group led by Sister Mary Vera, the organization’s mission has grown to include “outreach and advocacy, domestic violence education programming, children’s counseling, the Syracuse Area Domestic and Sexual Violence Coalition and a domestic violence education and accountability program for perpetrators of violence,” according to the Vera House website.

Ramona Galvin, a domestic violence survivor, participated in the event as a way to “bring awareness and support to those going through abuse to let them know there is help out there.”

Junior Morse, a Vera House educator was handing out white ribbons to participants before the walk. “It’s a way to get men involved with this issue,” Morse said. “Vera House is a non profit organization,” he continued, “we rely on fundraisers and grants to support the services we offer.” A participant in the White Ribbon Campaign kick-off ties a ribbon to a tree outside of the Federal Building in downtown Syracuse.

Lépine entered a classroom, separated the male and female students and claimed he was “fighting feminism” as he began shooting nine women and killing six. His rampage continued as he moved through the building where Lépine injured 10 other women and four men before turning the gun on himself. The massacre strengthened the Canadian women’s movement and has since become a symbol of violence against women.

In response to the tragedy, the White Ribbon Campaign was launched by a group of men in 1991 to raise awareness about male violence against women. The white ribbon symbolizes “the idea of men giving up their arms,” and has since become a global awareness effort.

Wearing a white ribbon or wristband means you “will not commit, condone or remain silent about domestic or sexual violence.” The White Ribbon Campaign was launched by a group of men in 1991 to raise awareness about male violence against women.

Syracuse White Ribbon Campaign supporters carried signs and tied ribbons to lamp posts, street signs and trees as they marched from Clinton Square to Armory Square and back. The walk was led by a group of men, including George Kilpatrick, Men’s Outreach Program Coordinator for Vera House.

Ted Long, co-host of 93Q‘s Ted and Amy in the Morning is serving as the 2015 White Ribbon Honorary Chair and was on hand to help spread the message.

Along the walk route, one friend hoisted another onto his shoulders to tie a white ribbon to a street post. Traffic was paused momentarily as walkers continued through intersections. A Syracuse police officer, directing traffic, had a white ribbon tied around his arm. Rep. John Katko was spotted participating in the walk alongside school groups, local companies and various other organizations.

Syracuse.com reported that Katko “helped draw national attention Thursday to Vera House” with a “speech on the House floor about Vera House and its 21st annual White Ribbon Campaign.”

A Men’s Issue, a Syracuse University student organization that seeks to “redefine masculinity and make a difference to end sexual and relationship violence,” was also represented at the event. Group member Paul Ang, thought it was “a great opportunity to support Vera House” which he described as a “critical resource for this community.”

“Men are the ones that do most of the violence” Ang continued, “so, really engaging men to think about how their behaviors, their language, even just the really small stuff can help contribute to those conditions that allow for violence to happen.” Syracuse supporters carried signs and tied white ribbons to lamp posts, street signs and trees as they marched from Clinton Square to Armory Square and back.

Mrs. New York America 2015, Jessica Lahr, attended to support Vera House. “They’re doing a fantastic job helping women and children who are facing the worst of the worst” she said. Lahr was excited to see the amount of support for the White Ribbon Campaign. “When we pulled up it was quiet and by the time we parked and walked there was a huge crowd of people.”

The walkers returned to Clinton Square leaving a trail of white ribbons behind them as the 9-day campaign kicked off. As the walk ended, participants grabbed lunch from a selection of food trucks gathered together on West Water Street. Chris Benton, the Director of Communications and Special Events with Vera House encouraged those looking to coordinate their own campaign to visit the WEBSITE, or call 425-0818 for more information.

“The campaign does bring in about $120,000 dollars to aid us in supporting our programs and services,” Benton said, “Each year the campaign grows a little bit more, so it’s great to see that growth and support in our community.”

Show your support on social media by using the hashtag #StandWithVeraHouse.

Saints Be Praised
Way to go NCAA
To Top