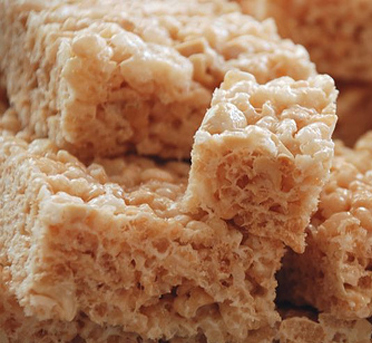 Everybody likes those. Right?

A friend of mine, let’s call her Rhonda, was thrilled to be invited to join a social group she admired.  But when she was invited to a potluck dinner she had a problem.  She wasn’t much of a cook and didn’t have a favorite dish to bring.  Then inspiration hit: Rice Krispies Treats.  Everybody likes those. Right?

She arrived at the dinner full of happy expectation and bearing her offering.  The hostess took one look at her dessert and said: “we don’t serve white sugar.”  The Treats were not served.  My friend was embarrassed.

This brings to mind, in a roundabout fashion, another story a different friend told me about her mother, let’s call her Helen.
Helen is an observant Jew and has kept the kosher dietary laws all her life, so when she visits  friends who don’t observe those laws, they just serve her dairy food.  In New York City, where a lot of people know those rules, even if they’re not Jewish, that’s no problem.

Helen is also an inveterate traveler. Usually she has no problem with finding the right food.  During one of her trips, Helen encountered a distant relative by marriage or friend of a friend, Betty, who out of the goodness of her heart invited Helen over for a home cooked meal.  Betty was not Jewish, did not keep kosher and had not paid any attention to kosher dietary laws.  But in honor of her guest, she boned up and served a dairy dinner with no meat of any kind, especially, as Betty noted “no pork.”
They enjoyed a lovely dinner and Helen told Betty how delicious the lentil soup was-unlike any she’d ever had. “Oh,” said Betty, “it’s the ham hock.”

Helen ate no more lentil soup but said nothing about Betty’s error.  Despite her religious convictions, she saw no reason to embarrass Betty, a woman who, despite her error, had tried to observe Helen’s dietary restrictions out of respect. Since Betty was unlikely to ever have another observant Jew to dinner, pointing out her error would have been cruel, according to Helen’s thinking.

So out of a similar respect for her hostess, Helen simply left Betty with the memory of an enjoyable evening.
What’s the morale of these two stories?  I’ll let you decide.  But I think it has something to do with the difference between real kindness and self-absorption. Let me know your thoughts.