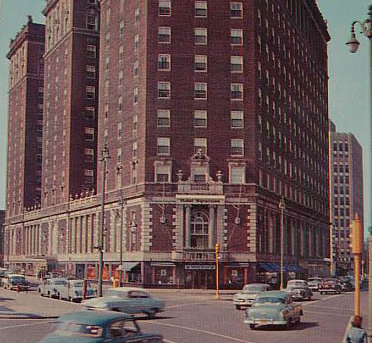 One of the best pieces of news this week, in my opinion, was the reveal of the promising future of our City of Syracuse’s Hotel Syracuse. The once thriving and then left-for-vacant edifice will be re-animated into a thriving hotel — let’s be positive about this — that exudes class and heightens the desire to stay in Syracuse. Yes, much of the inside — plumbing included — needs to be modernized and the rooms probably have to be re-sized. The lobby and ballrooms are supposedly good-to-go with a few things to update here and there, but they will not be torn apart and re-visioned. This is why we can have nice things. Tearing things down and re-building … it really didn’t make any sense to me. Everything costs money, of course. Regardless, this will help with the deserved re-vitalization of Syracuse.

What’s with all these re- words? Not sure. Well, scratch that … there is certainty as to why the words are emphasized as they are, the Lovecraftian allusion.  Hotel Syracuse is wonderful. This is no place to delve into my weird obsessions. The Hotel Syracuse will create jobs. It will create a sense of wonderment. I’m sure there will be open houses and local initiatives to support it, historical cooperation with the Onondaga Historical Association, and tours could be given. West Genesee had its junior prom there in 2000 (to date myself); it was nothing short of classy.

And there is curiosity with hotels with me. Hotels, old ones, are stories and adventures in and of themselves. Sure, you can reference any or all literary notion of Stephen King‘s work in regard to hotels (the good and the bad), but to those with overactive imaginations, it’s almost like a resort for inspiration. You meet new people, you wonder whose footsteps you’re walking on. Just avoid rooms 217 or 237. Another note: this brings New York state closer to its similarity with Italy. Not only do many of the names of places parallel the European country, but look what was found in 2009: The desire to get out of Syracuse is inevitable. Sometimes it’s for holiday and sometimes its for employment opportunities, albeit a semi to permanent relocation.  Sometimes the trip is to Letchworth State Park, and sometimes the trip is to Yellowstone. When the Smithsonian won’t do, The Louvre can make up for it. Wherever you go, your home is sure to follow, unless you don’t want it to: you can write it off.

The trip to Italy was the result of simple suggestion by a distant cousin over in Toscolano-Maderno, which is located on Lado di Garda. Within a week of talking to the guy, Adriano, the flight and nine-day stay were planned. If this was the teaching world, my third year of consecutive travel abroad would have been fulfilled, and this trip was the ricotta filling inside the cannoli.

In order to figure out the life you are living, the life you’re leading, you   won’t second-guess yourself when fronting the bucks to visit the land(s) where your blood came from. My blood is from the northern part, so my Tyrolean decent can lead you to figure out that one side of my family resided in Solvay. Sure you all are pointing fingers at me, calling me a cat eater, but rest assured that cats are always welcome; and they can rest soundly, knowing they will not be eaten. (Trying to get rid of all that fur is too much of a chore for such little meat.)

Five of the nine days were spent in the north and visiting other cities (Venezia, Verona, Brescia, Mantova) before traveling to Rome for the last two and a half. The mornings were spent waking up early, opening the windows to mountains and fresh air, and a couple days Adriano and I walked to the lake to see the calm blue, blue lake water balance sailboats. The first night in Rome, we did as the Romans did … well, the youngish ones at least … and the tourists. We got kicked out of a pub, because my cousin swore. (Yes, that actually happened.) We met a six-foot-tall Argentinean beauty named Valentina, who dressed as if she was looking for a good time, but she was very cordial. We participated in a pub crawl that was primarily — 90 percent primarily — filled with 20-somethings from The States and Canada. We, Adriano and I, pulled off 1970s dance moves to one Black Eyed Peas song that we heard playing at every damn bar. On a serious note. I got to see the home where my great relatives grew up in. Some of my pictures were copies of the pictures my mom took in the early 70s. The utmost respect and hospitality was shown to me by my family, who were meeting me for the first time. Tears were shared and hugs and kisses were given. A cousin of my grandfather’s, she was 96 at the time and ill, her closed eyes lit up and life sprang into her person upon finding out I was the grandson of Lewis. A day of trial-and-error with learning the Italian language, no translator, was experienced; my best communicative effort was tried and feebly succeeded. Adriano; his university classmate, Gabor; and I went to Sunday Mass at St. Peter’s Square. On the Cupola, a picture of the three of us was taken by a fellow Central New Yorker, hailing from Liverpool.

Oh, what a small world it is. Good thing we weren’t ever malicious. I was representing the United States, trying to erase any negative feelings our families and friends and strangers may have against us. Home was missed, and this was probably due to the culture shock sinking in, but there was desire to live there; it could be done. Knowing that returning home was inevitable, my excitement lied with wanting to show pictures and tell stories. When the three of us headed to Rome, I didn’t really want to go. There was too much to explore in the north. Rome could be done some other time. When boarding the Rome train that headed to the airport, there may have been a thought to drop my passport in the rubbish.

However, home is where the heart is and will forever stay within your heart regardless how wonderful or terrible the experience there was. Taking yourself out of your comfort zone, stretching that rubber band to a new length, will give you stories and experience. You’ll change, hopefully and for the best, and you’ll return with stories that will shape others. With technology nowadays, that process is easier to do so. Home is where the heart is. Photo: Christopher Malone.

Seriously, go. Get the hell out of town. Come back and tell us what you found.

This now North Carolina resident is the epitome of what is being said in this post. Mr. Fiello contributes to his blog Syracuse State of Mind (something is wrong with the domain, Chuck; ergo, the link is not given), but he contributes vivaciously entertainment to the Twitter world. If the 3-1-5 needs something to believe in, it’d be the geographically distant and appreciative people like Chuck. For our nation’s birthday, he donned his orange, white and blue; talk about not wearing the T-shirt of the band/flag that you are going to see, paying tribute to your country of birth, and paying homage to the university and city of upbringing all in one sitting.

Syracuse is a state of mind, folks. You bring it with you on a regular basis. You represent it as if you represent your own family or the company that you work for. Embrace it. Love it. A new menu at The Brewster Inn, Cazenovia
There’s No Misfortune in Missed Directions
To Top