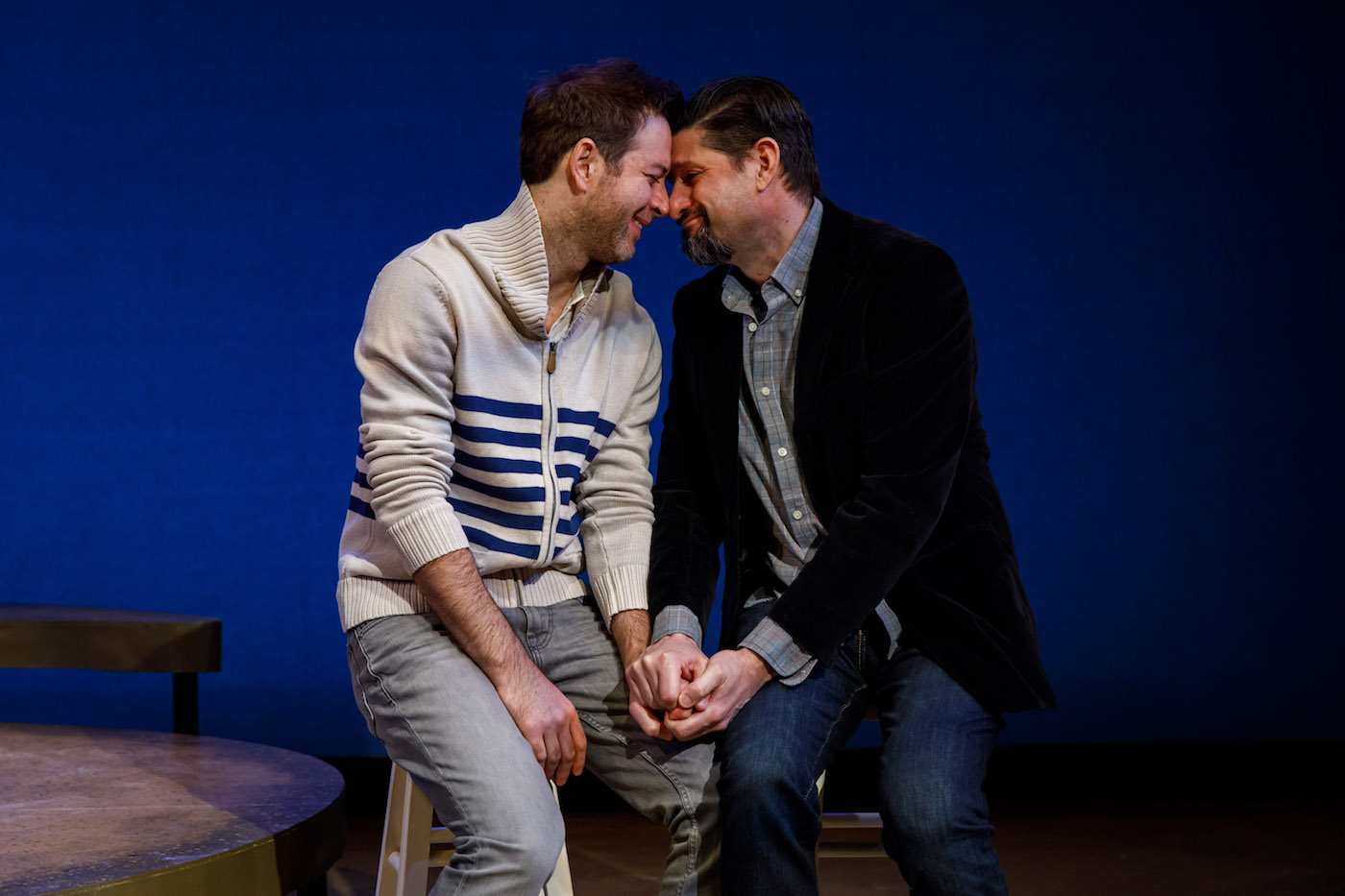 Where do we turn after suffering devastating loss? This is the implicit question posed in the world premiere of Wendy Dann’s Birds of East Africa, running through Feb. 12 at Ithaca’s Kitchen Theatre Company.

Many of us in this secular age turn to consolations in nature, perhaps a pristine lake in the Adirondacks or an unquestioningly supportive cocker spaniel. When 40ish ornithologist Marion (Lena Kaminsky, in a poignant portrayal) loses her much-loved husband Jack, her heart is in ashes and her mind is reeling.

One way out is to stick with her life’s work: studying the birds of the Serengeti Plain. Not that she’s so much taken with feathers in exotic colors. As she intones, “Every living thing is engaged in a symbiotic relationship.”

She also gets by, as Lennon and McCartney put it, with a little help from her friends. These pals are quickly revealed to be a gay couple: Stephen (Daniel Pettrow), a bit showier, always drawing attention to himself, and the morose and taciturn Nick (Gabriel Marin), who stumbles along with a pronounced and unexplained limp.

In their youth the three had pledged to come to each other’s aid in time of distress, which Marion knows has arrived. Only any comfort seems paradoxical now as the pair has moved from New York City to chi-chi Las Vegas, and they exude the kind of disharmony that precedes a breakup.

Visually, we are more drawn to Marion’s unspeaking companions, feathered creatures known as Blue Bird (Jeremiah Porter) and Red Bird (Jeremy Swift). They hover near her, especially when Marion is in reverie or seems to speak to us in her own voice. As Marion is mostly still, the birds dominate much of the action in the first third of the 80-minute action.

Director Rachel Lampert, a 20-year collaborator and pal of playwright Dann, once ran her own dance company and brings much experience to integrating dance interludes in dramatic action. Nonetheless, she has assigned the bird choreography to Tucker Davis, who has been a close observer of avian kinetics and prescribes telling and evocative gestures. Grant Carey supplies complementary original music.

Action is non-linear in Birds of East Africa. We move from place to place on the map, first flashbacking 10 years into Stephen and Nick’s relationship, then two years, as well as entering with Marion into Dream Flights out of chronology. Upstage panels signal these shifts, as there are no cues in changing sets and only subtle ones in costuming.

Continuing through different modes of time and space is Marion’s determination, even obsession, with completing her study of the birds of the Serengeti. She reads passages she has composed and eventually produces a large, illustrated volume with the play’s title on the cover. Marion reads at length from the plausible-sounding text of her book. Although this is not quite a parable, offering a lesson to the grieving widow, we understand all of the playwright’s words point to the central theme.

Much of Dann’s dialogue hints and suggests, rather than shouting. As a wordsmith she has more in common with a modern poet such as Philip Larkin or Eavan Boland, than a declaiming dramatist like David Mamet. There’s no confronting or cursing in a Dann drama. Meaning wells up from subtext.

She never tells us why she should cite the birds of East Africa instead of those of, say, the Montezuma Wildlife Refuge, but we figure it out. Studies from the early 20th century established that birds are rough on each other, like Tennyson’s “nature red in tooth and claw,” which is why we all use the phrase “pecking order.” In the Serengeti, Marion depicts the benign hornbill, which looks after other species, helping the mongoose to find food. She speaks of symbiotic relationships between species that sometimes come with a cost. It is just about this time that we flash back to the opening burst of Stephen and Nick’s love affair.

Syracuse-raised Wendy Dann, now an associate professor at Ithaca College, has developed a national reputation in recent years as an actor, director and playwright. Before Birds of East Africa, she was probably best-known for Sammy and Me, written with Eric Jordan, on Sammy Davis Jr., which opened at Ithaca’s Hangar Theatre in 2006 and has displayed robust legs ever since. In 2002 she became the first Syracuse University Drama Department graduate to direct a play, Lee Blessing’s Chesapeake, at Syracuse Stage. And long before she became famous, Dann was a talented intern at the Syracuse New Times.