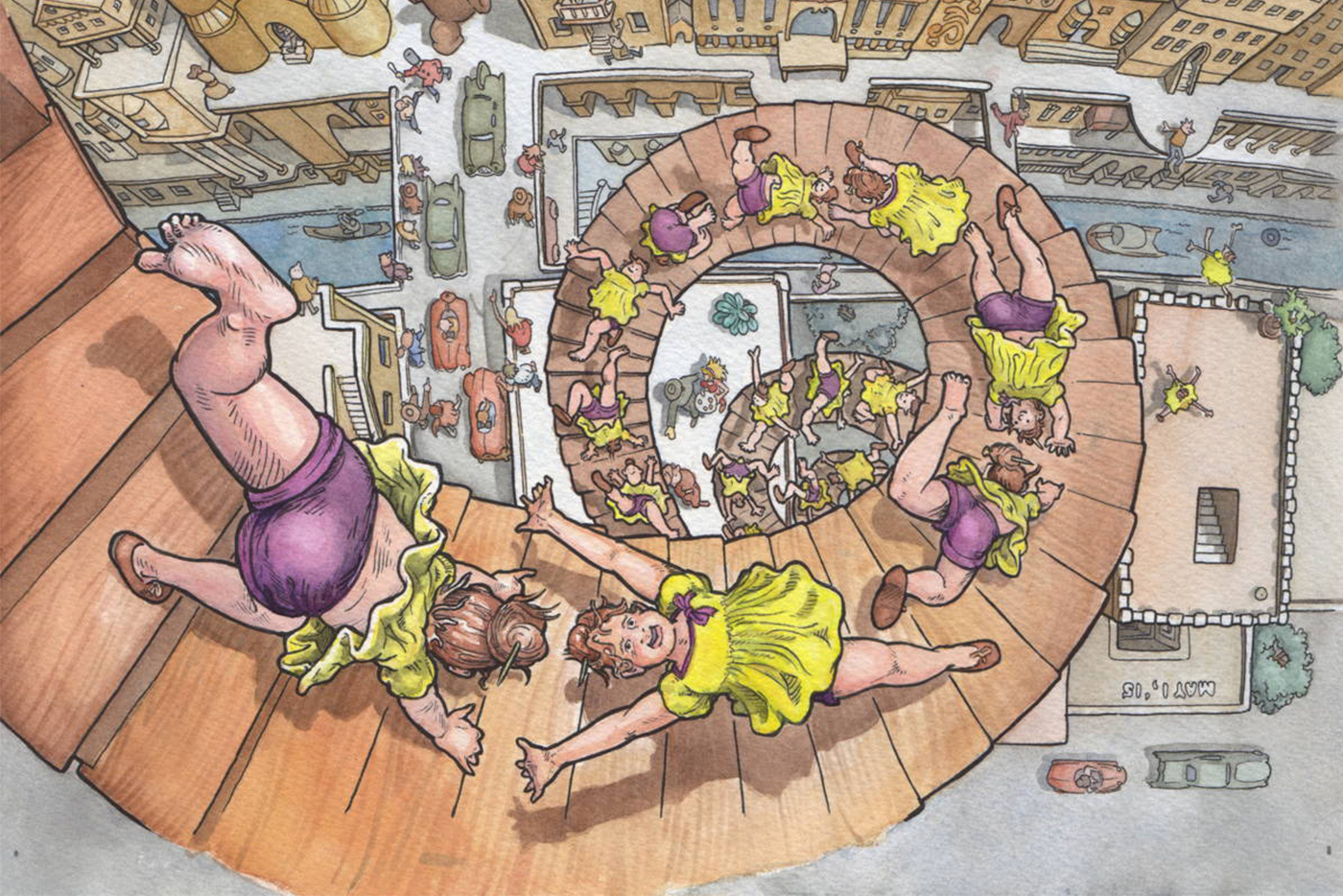 “Small Planets” stimulates the imagination with its playful and quirky components.

Small Planets, on display at the Edgewood Gallery, focuses on two local artists who have a sense of whimsy and the ability to incorporate other realities into their artworks. Dan Shanahan brings narrative into his hand-colored prints, while J.P. Crangle’s small sculptures portray brothers and sisters from another planet.

The exhibition’s selection of Shanahan’s illustrations provide a good sense of his artworks. There are pieces pivoting on a visual twist, like the image of an elephant wearing sunglasses and driving a sports car. In another work, animals stand outside a zoo and observe humans confined there. Other pieces satirize an event such as an arts-and-crafts festival. In Shanahan’s black-and-white original, one of the few works in that medium, one booth offers free leaves, while a second sells beer bugs. Meanwhile, two nearby patrons fight over an artwork.

In larger works, the artist wanders even further afield. “Cannonball Boulevard” depicts classic cars driving down a long roadway with spectators including birds, dogs and an alligator. “Motor City Missy” integrates several elements: women driving motorcycles, raucous onlookers, futuristic buildings, people in airplanes and other air vehicles watching the competition. A third piece, also with touches from the future, shows people swept into the air toward the Moon Beam Cafe.

Shanahan’s best work, “Trom de Triomphe,” demonstrates his ability to fully execute an ambitious project. Here he references a Paris landmark, the Arc de Triomphe, portraying the edifice and lots of cars crashing into each other on the street next to it. Tiny figures, including the emperor Napoleon and nymphs associated with classical sculptures, glide about the well-known structure.

Crangle has both paintings on board and sculptures on display. The majority of the sculptural works are neither thematic nor figurative; they simply spring from the artist’s imagination. One depicts a small creature with eyes, a long snout, greenish color, and a starfish on top. A second sculpture has three eyes and features suggesting a reptile. There are also creatures fashioned in black and white, a couple featuring knobs and bumps, a figure with a bulbous nose and a twisted grin. A blue mass looking like a toupee and a red-and-black object sit on top.

A large sculpture, one of the few in the show, portrays a man wearing a lab coat whose feet are trapped in a bucket labeled “Toxic Waste.” He appears in lavish colors and has a faint resemblance to Elvis Presley.

The paintings on board typically are left over from other projects completed by Crangle. For example, there’s a green creature with one eye, a goofy grin and some alligator features. It wears a tunic or sweater. Other works also have a humorous context.

The exhibit also has a few figurative works such as a bird and a figure holding a baseball bat. Those pieces don’t stand out by themselves but do remind viewers that the work Crangle has in the Edgewood show are part of a larger portfolio. He has created dozens of caricatures that help decorate Delmonico’s Italian Steakhouse, Gannon’s Ice Cream and other locales.

A third artist, Sharon Alama, has earrings and collage pins on display. She makes the earrings from thick watercolor paper which she paints with bright colors and decorates with beads. And the pins combine an array of colors, elements such as glass, and a fine sense of texture.

Small Planets skillfully presents works that fit in nicely with each other, emphasizes the role of pure imagination, and makes room for pieces that merit extended viewing. Among other things, it displays Crangle’s small sculptures, pieces that haven’t been previously exhibited in a gallery.