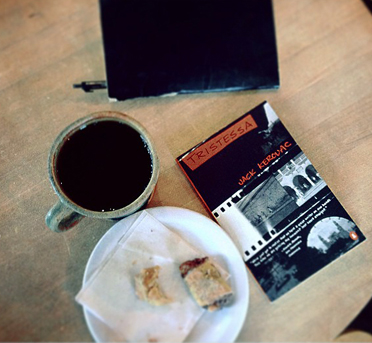 This weekend was typical to the point where life felt cryptic. And that’s about it.

But you should know: Without fail, one of my biggest faults is locking my keys in the car.

On Friday spontaneity to hang out with some church basement ladies at a merry-go-round fell through because of time issues. Those old bags love a good ride; surely my night would have been full of laughs, but it just couldn’t happen. So I ended up hanging out with a couple of cats and feeling like an O’Kaysion. Aside life being live, everything seemed to be prerecorded.

That Friday, earlier, a bet was made. There was a requirement for handing in one of my man cards, but, shit, I don’t mind taking one for the team from time to time. “You’d really enjoy it” – this reassurance was said to me. If I didn’t enjoy this Dunham-puppeted project, there would be money in my favor; however, I wouldn’t and will not accept such an offer, because there is no greedy hand on me or in me to make me talk. And the writing is what captivates me, the realistic and weird nature of the show that intrigues me. It’s not Lynch-weird, but it’s more speculative like Woody Allen with a more feminine voice. I’ll see the bet through.

But it’s interesting, the show … life?

I found myself at Blarney Stone with a couple improv guys. We took part in pints and photographs with a gaggle of women, and we didn’t know any of them. They were the mid-20-something gathering – but at Blarney instead of a downtown venue, but it’s not to judge – and it was the birthday of one of the members. We did the gentlemanly gesture and took 25 or more pictures of them before sitting down with pints and food. A baker of words and a locker of thoughts, two newish contributors of the latest generation of a classic publication’s entertainment nook. A former interest that once made my heart flutter met brief acquaintance. The night was called, and the cats were checked on one final time – yes, too, cats. The mewing fur balls didn’t bring me any rats or rodents or rabbits, so the night was riddled with convincing text conversations from different parts of the Capital Region.

And sleep hit, rest assured, as certain as my index finger would tap the snooze option the following morning. Only this time I would roll over to find myself upon the couch of LoFo, sitting across from two more improvisers, women this time, and each bearing names of biblical proportions. One recently was cut short, and the coif looks great on her. The other, whose surname is quite sharp, helped pinpoint some career issues that have been plaguing me and my indecisive self – a map was made. And, gents, let it be known that the thought and opinion of women can come in handy. Listening is necessary, however, and brutal honesty needs to be accepted. I am, like several others in similar fashion, definitively my own worst antagonist. Enemy, however, not so much. But in small, quick, difficult-to-be-honest bursts of raw willingness, I was able to get to know myself better in terms of career and goals than ever before.

And a wine outing was had that night. After a stroll through Saturday’s Salt Market, my running into a familiar face with a sly surname ignited interest and a fulfilled promise to meet up for wine –  a deeper red than that of the atmosphere of Al’s – the corners, the shadow-caressed areas are most similar of a shade – where we placed our tails in the armchairs next to the window facade. A friend we both knew with a personality that matched his limitless last name stopped by for a hello, preceding a second visit from another shared friend; the latter, when considered with that constant atmospheric hue, could have been that famous viking, but he’s more kind and soft spoken. Glasses clinked, talked of entertainment through mouths of madness and reopened gates, made up stories about people with awful ties and facial hair, and enjoyed an honestly low-key night.

And Sunday morning arrived with a pounding head, but this was not from the wine. This resulted from staring into my locked car, focusing on the keys that were resting on the back passenger-side floor. In the dramatic sense, I could have been seen tapping my forehead upon the glass or sitting upon the ground with my back to the car, clapping my head upon the door panel. However, the seat of the chair in the cafe was as hard and as cold as the parking lot.

How did this happen? The key ordeal was over a pen – a fucking pen – that became lodged between the console and the passenger seat.

Because, should timing be in my favor, having just enough time to arrive early at the Tyrol Club, which celebrated it’s 85th Anniversary this weekend.

Although the polenta-provided party occurred the night before, the Syracuse Improv Collective would take part in a workshop that would allow the individuals in our group to become better improvisers and human beings, because that’s what learning to listen and taking risks and getting out of your head is all about. It’s best not to think. I got to experiment with personas that were not me, but embodied that personal essence and experience. Because writing and roles are affected by actual feelings and events that actually happen. There is no way around that, unless there is an option to pay top-dollar for a brainwashing flush. Yet, it is known there is some cognitive speck of light that can light the way back to normalcy. And we paraded around, having fun, and creating new worlds before the fake reality of The Walking Dead held my attention.

And the discussion of survival was discussed over pizza and wings. It always is: discussed, not pizza and wings. It’s inevitable, and there is a daily reminder. How is this going to be survived, this life? It can be asked while staring into the mirror, beginning with: Should I shave today? As I waited for my father to arrive: I sat and drank my coffee and read Kerouac, his Tristessa. This sprouted thoughts – Why not hard drugs? – crossed my mind. They never appealed to me – save being a baby of the 80’s instead of a white middle-aged executive – and the group of friends associated with in school and college prevented those false senses of reality from being enjoyed and regretted. Kerouac goes into dependency – perhaps, perhaps not – of morphine. And morphine was fantastic during the emergency room visit, that time when the top skin of my foot flapped in the breeze, but I could never imagine myself living so delusional and lethargic all the time; the harder stuff would hinder creativity in my opinion. So, in the long run, the simplest substance consideration was moot.

Don’t you lock your car with the button? – this was asked to me by my father. And I replied, saying typically yes. Unfortunately, surfaced former force-of-habit allowed me to hit the door button and slap the door shut. And it was because of the pen that I felt that I didn’t have a grasp on what I’m actually doing.

My brain immediately realized consequence as soon as the door clicked; so, in the moment and at some point, I had to have known what I was doing.

This was hard to explain. Everything usually is.

Everything aside, it was a typical weekend.

Sunday night I had a dream that I was battling a giant spider with hundreds of eyes. Just because I had woken up, it doesn’t mean it’s gone away.

TheSocietyGurl: Local Love at The Salt Market
Free Will Astrology
To Top