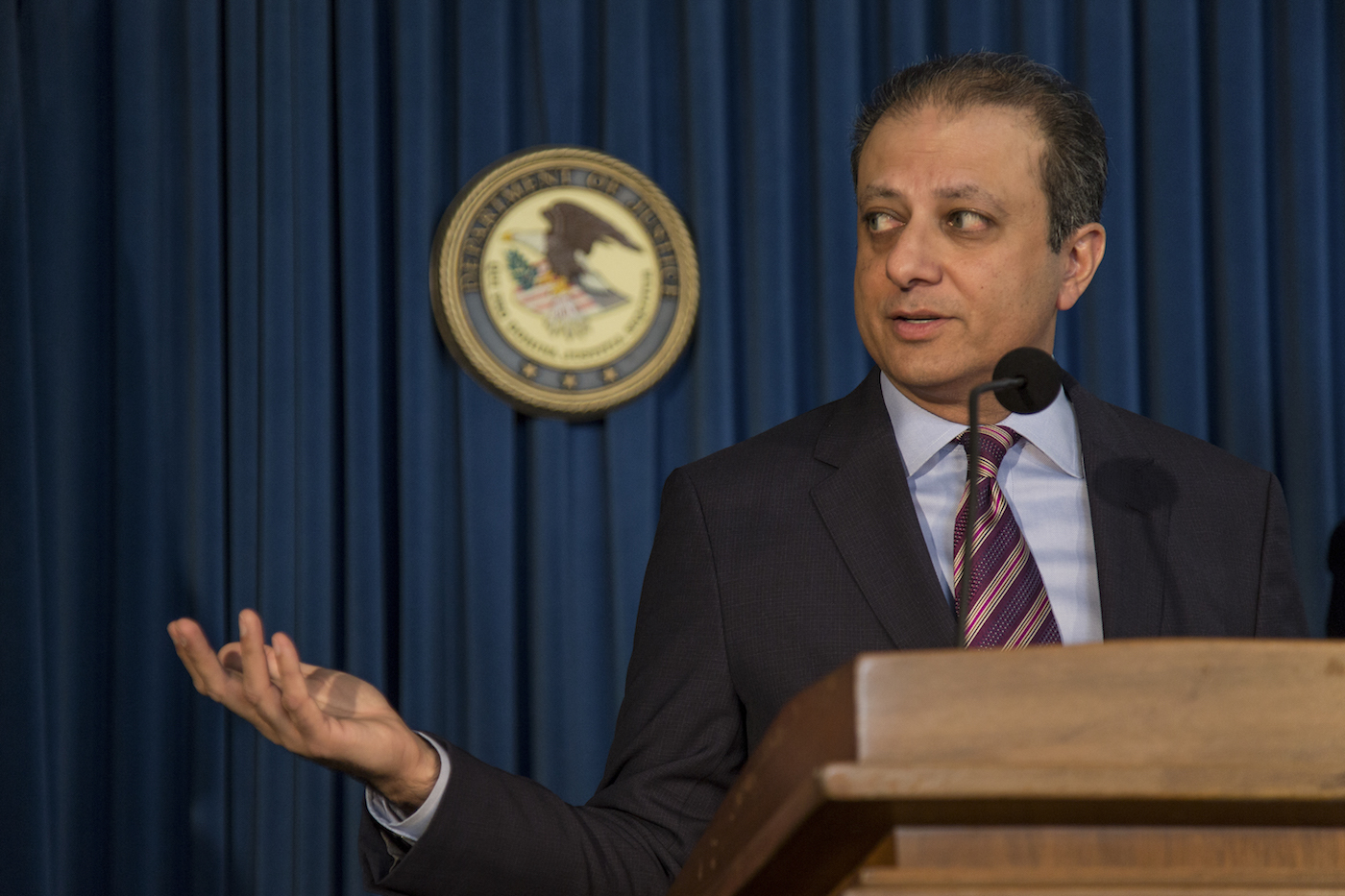 The federal prosecutor has done a lot of good for the nation and for New York.

If you’re going to run in the Kentucky Derby, you don’t leave your prized stallion in the stable.

Only when the well runs dry do we know the value of water.

Any one of these classic and cliché expressions can accurately illustrate President Donald Trump’s administration’s sudden request for the resignation of Preet Bharara, the now former U.S. district attorney for the Southern District of New York.

Bharara was among 46 federal attorneys appointed by former President Obama whom the Justice Department ordered to resign on Friday. Several of them apparently were asked to clear out their desk by the end of the day.

Bharara refused to resign, implying if President Trump wanted to get rid of him, he’d have to fire him. The president did so on Saturday afternoon.

Now, that’s not abnormal. Presidents have the right to fire district attorneys at their discretion and usually do of those from former administrations. Bill Clinton asked all 93 attorneys to resign the day he assumed office in 1993.

But in regards to Bharara, the Westchester County Democrat met with then President-elect Trump back in November and told reporters that both Trump and Attorney General nominee Jeff Sessions had asked him to stay on, and he wholeheartedly agreed to do so.

So, why was he suddenly being ousted less than four months later? Many have speculated that it’s because of comments by Fox News commentator Sean Hannity the day before about the need to “purge” the federal government of Obama appointees because they were “saboteurs.”

Does that describe the man who presides over New York’s Southern District?

Bharara, the Indian-born prosecutor appointed in 2009 after being unanimously confirmed by the U.S. Senate, has been a high-profile, charismatic and well-respected individual over his tenure. He has been a crusader against political corruption, a sheriff to Wall Street and archenemy of terrorist organizations.

He is remembered for his cracking down of insider trading in the hedge fund industry, bringing down Raj Rajaratnam, a hedge fund billionaire, and Rajat Gupta, a former Goldman Sachs director, for conspiracy and securities fraud.

He created the Civil Frauds Unit, which landed nearly $500 million in settlements, including multi-million dollar deals with CitiMortgage and Deutsche Bank for their reckless lending practices that led to the financial crisis. Bharara won a guilty plea from Peter Madoff for his role in his brother Bernie’s infamous Ponzi scheme.

His prosecutions of more than 100 Wall Street executives landed him on the cover of a 2012 issue of TIME with the headline “This man is busting Wall St.,” and a 2016 article in The New Yorker titled “The Man Who Terrifies Wall Street.”

In 2014, Bharara charged Toyota with wire fraud for lying to customers about safety issues with their cars. Toyota paid a $1.2 billion fine, the largest ever by a car manufacturer.

Bharara successfully prosecuted terrorists like Sulaiman Abu Ghaith, a son-in-law of Osama bin Laden; Ahmed Khalfan Ghailani, the first Guantánamo detainee to be tried in the civilian system; and Faisal Shahzad, a Pakistani immigrant who attempted to detonate a car bomb in Times Square in 2010. He created the Terrorism and International Narcotics Unit, which prosecutes those who engage in transnational acts of terrorism and narcotics trafficking.

But Bharara’s signature achievement is undoubtedly weeding out corruption and abuse of power of government officials; both Democrats and Republicans. That started when he was still assistant attorney, when he played a role in the U.S. Senate Committee on the Judiciary’s investigation into, ironically, the firings of U.S. attorneys, which led to the resignation of George W. Bush’s attorney general, Alberto Gonzalez, in 2007.

Over the last few years, Bharara’s office has prosecuted nearly 30 public officials for corruption. Most notably New York state legislators, including the leaders of both chambers, Assembly Speaker Sheldon Silver and Senate Majority Leader Dean Skelos, just weeks apart from each other. He investigated Gov. Andrew Cuomo for shutting down an ethics commission he created, announcing a year later no criminal charges would be filed.

Most recently, his office was preparing to try several aides of Cuomo accused of bribery and bid-rigging. Also, wrapping up investigations into New York City Mayor Bill de Blasio’s campaign fundraising, as well as if Fox News structured settlements of sexual harassment — all of which some worry may be at risk due to his departure.

But just as important, Bharara didn’t just prosecute crooked politicians. He has made New York corruption a central issue and has taken his mission straight to the problem, using his wit and speaking abilities to address Albany about the need for concrete ethics reform in New York state, essentially blaming the Legislature for corruption and then not doing anything about it.

“You think no one knew Sheldon Silver was corrupt before he was put in handcuffs? Not a chance,” he said. “Good people knew, and yet they didn’t do anything.”

Yeah, he sounds like a “saboteur” alright, doesn’t he?

A saboteur we need.

We need attorneys like Preet Bharara, someone who has stood up against the rich and powerful time and again and won. Someone who isn’t afraid to stand up to his own party or even his own heritage. We need someone who has earned the respect of those in the opposite party like Republican New York Assemblyman Steve McLaughlin, who even objected to Bharara’s dismissal, tweeting “Definitely not a wise move at all.” We need someone even a Republican president and Republican attorney general had previously asked to stay.

But that, as they say, is that. Bharara told The New York Times in 2014 that if there is a “credible whiff that justice has been politicized, there’s nothing worse than that.”

He has been the victim of just that.

To reiterate, it was well within Trump’s jurisdiction to fire Preet Bharara. The president didn’t do anything wrong. But that doesn’t mean what he did was right.