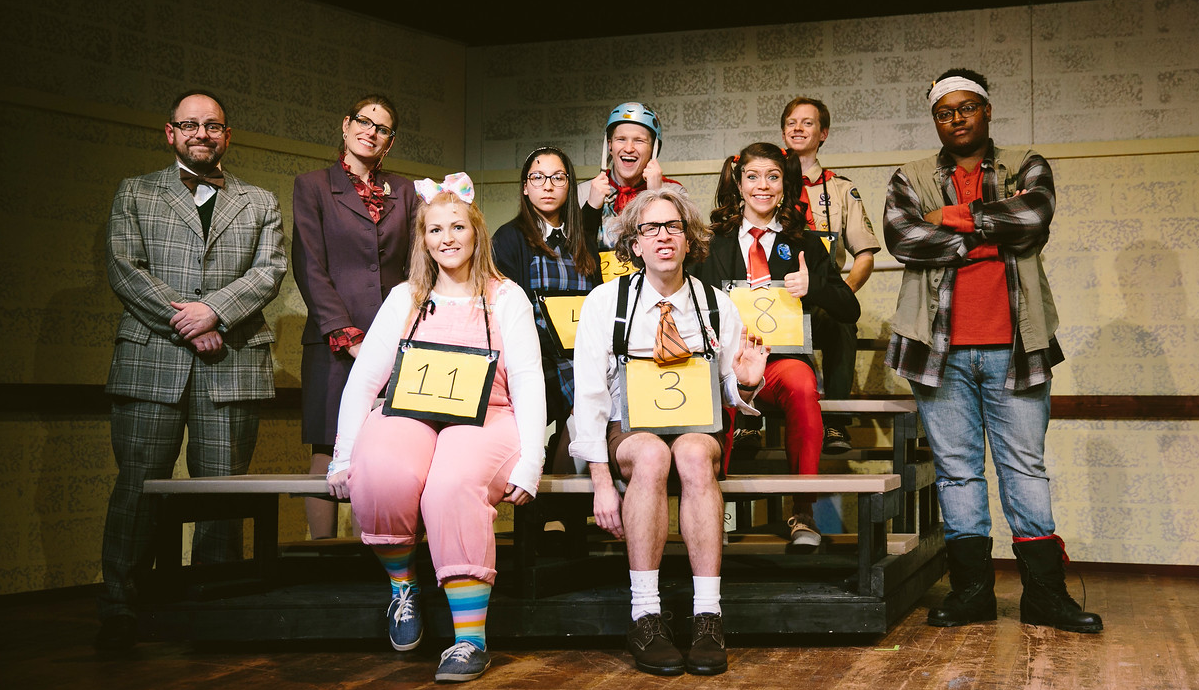 Of composer William Finn’s several shows, two have been continuously popular on local floorboards. Falsettos, the two-part family drama of divorce and reconciliation, touches hearts by being done pretty much the same way every time, even with casting changes. The 25th Annual Putnam County Spelling Bee, on the other hand, invites improvisation and elaborations of character.

In the first decade of this century, a batch of people noticed simultaneously that the middle school spelling bee is a perfect live-action drama, not unlike a boxing match or a hockey game. Jeffrey Blitz’s 2003 documentary Spellbound depicted brutal, soul-draining competition from what he observed.

About the same time Spelling Bee originator Rebecca Feldman took a more nuanced, ironic view. Everyone in the performance, from the adults running the show to the kid contestants, is creating recurring characters. It’s almost a naturally occurring commedia dell’arte. Once a character has X-ed off a spot in the action, he or she can swing the comedy in any direction.

Following Feldman’s original concept, a new book by Rachel Sheinkin with music by William Finn moved Spelling Bee to off-Broadway, whose funkiness and irreverence the show retains. The later move to Broadway in 2005, accompanied by several Tony Award nominations, emphasized then deeper passages. More than being comic types, some of the kids feel and express real pain. Lonely, needful Olive Ostrovsky (Jennifer Pearson), who lacks the $25 registration fee, scores with the plangent “I Love You Song.”

At first the stage is so crowded we can’t tell who’s who. That’s because four volunteers, not all of them young, swell the number of contestants. Some of these are local celebrities, like WNTQFM 93.1 radio personality Ted Long on opening night. Upcoming cameos during the show’s run will include community theater icon Bob Brown and former Onondaga County Executive Nick Pirro. Some volunteers are quite capable, but their luck is scripted not to last.

Stage left is dominated by three adults, led by bee moderator Rona Lisa Peretti (newcomer Christy Ashby), Putnam County’s top realtor who frequently recalls her moment of glory in a long-ago bee when she correctly spelled “syzygy.” Much lower in status is bow-tied assistant principal Douglas Panch (Josh Mele), who has been absent from the scene for a while. And third is muscular Mitch Mahoney (Cameron Walker), an ex-convict serving required community service as a “comfort counselor,” which means handing out boxes of fruit juice to disappointed contestants.

Mele, clearly, has had this role on his mind for some time. When the now-defunct Wit’s End Players company premiered Spelling Bee in October 2009, Mele was then a rather thuggish Mitch. He has since become one of our most versatile performers, warbling as Jean Valjean in Les Miserables and snarling as Col. Jessup (“You can’t handle the truth”) in A Few Good Men. This is his chance to show what he can do with stand-up comedy, and he soars with it.

Panch’s lines are terrific to begin with, like his useless sentences to help the students understand obscure words: “Sally’s mother told her that it was her cystitis (an inflammation of the bladder) that makes her special.” It’s possible that Mele is on such a roll that he gets more out of the lines than his predecessors have, but it also seems possible that some of his responses are saltier then those heard in previous mountings.

Also in that 2009 production was Dan Williams as the adenoidal William Barfee, whose foolproof “foot method” makes him the villain to beat. He visualizes each word by spelling it out on the floor with his right foot. Vain, paranoid and self-pitying, he growls that his name should be pronounced to rhyme with “parfait.”

In other productions, Williams has been a distinguished musician, winning a Syracuse New Times Syracuse Area Live Theater (SALT) award for his work with Garrett Heater’s Pippin last summer. Williams owns the role, even though it implies that a middle schooler should be sporting a mane of gray hair.

Keating’s other casting choices reflect comparable strength. Frequent leading lady Ceara Windhausen inserts a plausible lisp into the mouth of hapless Logainne, the one whose two daddies give her an unmanageable family name: SchwartzandGrubenierre. Like Mele’s vice principal, Logainne brings down the house with lines that sound new in this production.

Kilian Crowley, a veteran of the 2015 Le Moyne College production of Spelling Bee, wears a helmet and Superman cape as Leaf Coneybear, who can only deliver the correct spellings in a trance. Another Le Moyne leading lady, Natasia White, gives hyper-performing Marcy Park the backbone to get a word wrong and win her liberation.

Ryan Sparkes scores as the merit badge–clad Chip Tolentino, who sings about how the rush of hormones to his groin frustrates his concentration. And longtime character actress Jennifer Pearson’s reinvention of her persona means that all of Olive’s pathos must now arise from gesture and nuance.