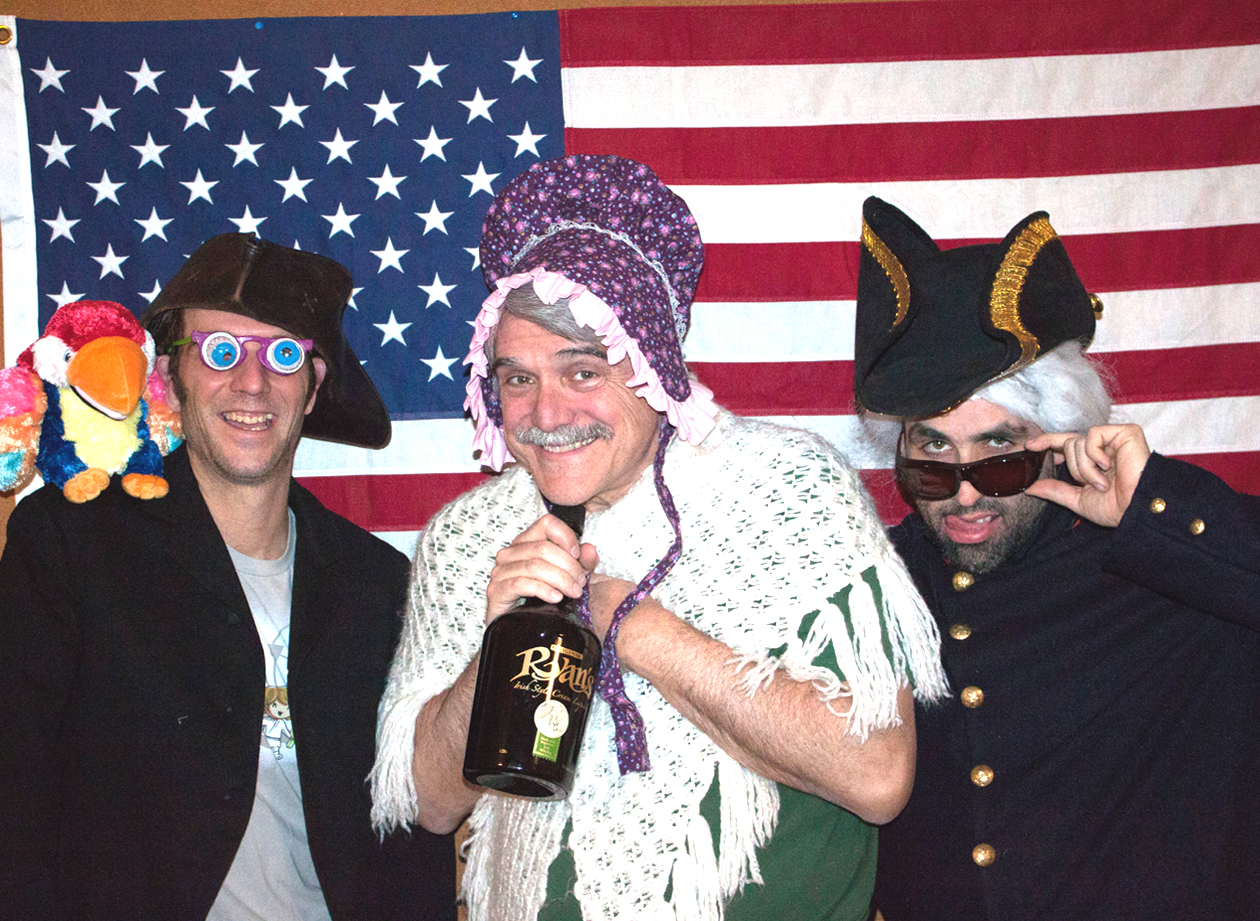 The Reduced Shakespeare Company’s farcical spoof Complete History of America (Abridged) has always been in danger of being seen as a lesser sibling of the company’s send-up of Shakespeare. Both shows feature three guys with minimal costume changes playing all the roles at breakneck speed. The spoofs are highly allusive, with elements of vaudeville, commedia dell’ arte and slapstick.

Yet both are also substantially different. While audiences surely recognize Ben Franklin more readily than they do, say, Coriolanus, they are also more involved with him. In these polarized times, any irreverence is in danger of pissing off the blue staters or the red staters.

This production from the Baldwinsville Theatre Guild begins with strong credibility. Veteran director Sharee Lemos has handled this material before and has headed off some problems before the show hit the stage. Pruned are all stale allusions and references (America was first produced in 2000), as the name Justin Bieber now fills in the gag space formerly occupied by Jerry Lewis. Also in are references to Betty White, Noam Chomsky, Whoopi Goldberg, J.K. Rowling and local car kingpin Billy Fuccillo.

Supporting Lemos’ authority is producer Heather Jensen, who has lined up a superior ensemble of misfit wigs, hats and noisemakers for a show that purports to be hippie-rudimentary.

Lemos has cast three experienced but very different comic hands. Guild regular Josh Taylor gained new stature when he won a Syracuse New Times Syracuse Area Live Theater (SALT) Award for his Igor in Young Frankenstein; for this show about 20 other characters pop out of his skinny frame. Joe Pierce, one of the most experienced players in community theater, has not previously been known for madcap high jinks, but here he unleashes his inner loony.

Bearded, barrel-chested Matthew Gordon is the least known of three, earning most of his previous credits in Oswego. He’s an adept physical comedian, kind of a muscular mime, who takes chances, like whipping up Lucille Ball with just a red wig. His Ronald Reagan as a guileless ventriloquist’s dummy, manipulated by a chapeau-wearing Nancy Reagan (Taylor), is the show’s best sustained bit.

Fox News fans can relax, because the gags really are fair and balanced. A speeding Franklin Roosevelt (Taylor) gets his darts, and Lemos’ scripted ad-libs continually dig at the Democratic primary’s super-delegates.

Complete History of America (Abridged) runs nearly two hours, long for madcap. Many of the show’s longer sequences, like the Founding Father and the United States in World War I, run at a fluff-free breathless pace. One of the few weak spots is the section on early network radio from the 1920s and 1930s. Lemos and company are disciplined, but the material is just less familiar.

Playwrights Adam Long, Reed Martin and Austin Tichenor sound like wounded patriots. While they dote on the absurdities of American history, like how the whole place was named by a careless Italian mapmaker, they are unsparing on the seamier chapters in American history. Chief among these are, of course, slavery and the wresting of the land from the native population. The three players, breaking though the fourth wall, tell us that some subjects, like child labor, just don’t lend themselves to comedy. Repeatedly, however, this show offers exuberant, flag-waving fun.

Local Hop
House Calls for the Working Class
To Top