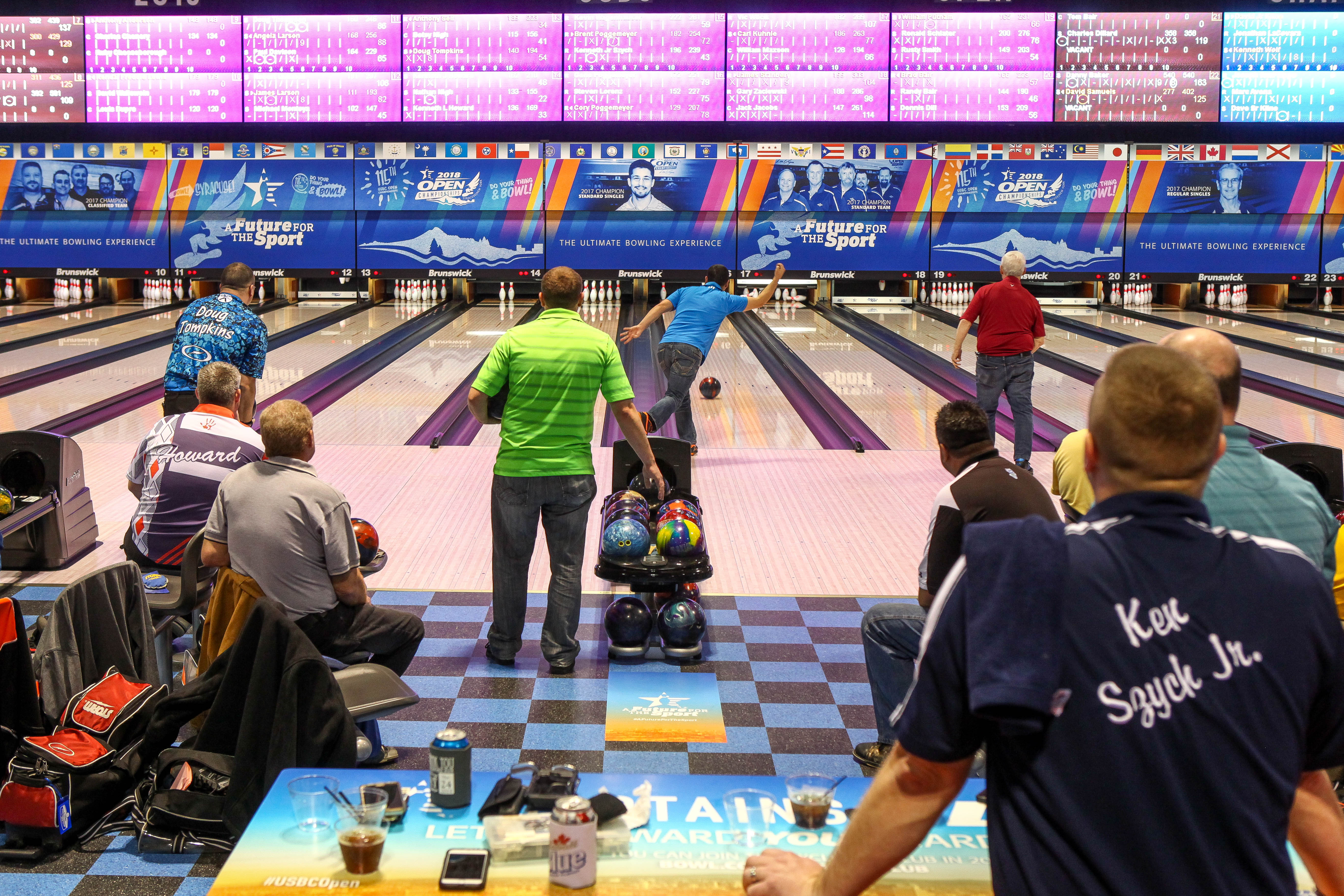 All eyes were on Patrick VanWagenen of Kingston, N.Y., as he took the honored approach as the first bowler — of some 40,000 from all over the world to follow him — to kick off the U.S. Bowling Congress 2018 Open Championships Tournament.

Chosen by a random lot that March 24 evening at downtown Syracuse’s Pirro Convention Center, Van- Wagenen was crowned “Joe Bowler” during this year’s opening ceremony. Wearing his crown and cape and holding his scepter, VanWagenen was escorted to his throne in front of the specially installed 48 alleys created for the four-month tournament. He was given the prestigious duty of rolling the first ball on lane 28. VanWagenen said his only hopes were not to choke in front of the crowd of fellow bowlers and fans, including his wife Connie.

“I’m just focusing on not putting it in the ditch,” he told emcee and USBC deputy executive commissioner Jason Overstreet just before his approach. VanWagenen — a member of one of two Ed’s Budget Truck Rental teams, who carries around a 200 average at his home alley, Patel’s Kingston Lanes — threw an impressive attack at those pins, leaving only a pesky 10-pin standing.

VanWagenen bowled with the first squad at 7 p.m. that evening and returned the next morning at 7 a.m. for a second series. There, he bowled alongside USBC Hall of Famer Marshall Holman, illustrating just how close the amateurs can get to the pros in an open competition like this. Especially inspiring to VanWagenen was seeing that even the pros have a few “off” frames, he said.

On his return to Kingston later that day, VanWagenen said he was really only there because his brother was in need of another bowler to complete the two teams sponsored by their dad’s business. It was his first time at a USBC Open Championships Tournament, he added, but it definitely won’t be his last: VanWagenen also won a trip to next year’s tournament in Las Vegas.

He called the lanes “challenging,” noting he had to make some adjustments to his approach to compensate. VanWagenen was proud to say that although he didn’t bowl spectacularly, he wasn’t low man, either. And that three-hour ride to Syracuse gave him memories to last forever.

“It was really a once-in-a-lifetime experience,” he said.

“It’s just so exciting,” Connie agreed. “He’s really a great bowler and we are excited to be going to Las Vegas next year.”

Both Syracuse Mayor Ben Walsh and Onondaga County Legislature Chairman Ryan McMahon offered official proclamations from their own governmental bodies commemorating March 24 as “USBC Day” in both the city and the county. Walsh reflected that he might have been only three months into the post, but the tournament had already given him quite a feather in his cap. Coming up on the 100-day milestone in office, people might be asking what he has accomplished, he said.

“I got the USBC here in Syracuse and I think that’s pretty good,” he said to thunderous applause. Hundreds of bowlers and their families will be in and out of Syracuse on a daily basis for the USBC Open Championships, bringing an economic boom with them. (Photo by Michael Davis)

McMahon agreed the tournament was “a big deal for our community,” and said he was glad to have been along for the entire process of selecting Syracuse for this year’s host city, work that began as early as 2013.

It wasn’t a hard decision for the U.S. Bowling Congress to choose Syracuse as the host city for its annual tournament, which Overstreet called “the largest participation sport in the world.” In fact, organizers say, it was “an easy choice.”

“In a city like Syracuse, there is a long history with the USBC Open Championships,” said USBC spokesman Matt Cannizzaro. “The event previously was held here in 1935, 1958, 1973 and 1999, so there is a mutual respect, and the city knows all that is involved.”

Cannizzaro added that there is still a formal bid process, and that starts years in advance. “There are requirements for a city to be considered,” he explained, “from the size of the venue, a financial commitment, use of said venue from December until almost August, so many hotel rooms, rental cars, restaurants, et cetera. The venue must fit a minimum of 48 lanes, which we installed this year, and still have room for office and vendor space, a concession area, locker room, scale room, and seating for guests. The city is a great size, there’s plenty to see and do, the venue is familiar and the whole community is very welcoming.”

The first USBC Open Championships Tournament was in 1901, held in the Welsbach Building in Chicago. Six lanes were installed to accommodate 41 teams from nine states, vying for $1,592 in prizes.

The USBC expects nearly 40,000 bowlers — plus their family and friends supporting them — to come out for the four-month tournament, traveling to Syracuse from across the country and beyond. Bowlers will be of all ages from 16 and up, both amateurs and pros with all levels of bowling prowess, as there are three average-based divisions in the tournament.

With a prize fund that will approach $5 million, bowlers will be able to win cash in teams, doubles, singles and all-events in their respective divisions. There’s also the opportunity for optional side pots, as well.

Although registration for the 2018 Open Championships is closed, latecomers and walk-ons can still check either the online or on-site substitute boards to fill in for bowlers who can’t make it. There is also a waiting list in case a team cancels. A bowler lines up the ball, hoping to pick up the spare. (Photo by Michael Davis)

As the tournament kicked off March 24, the bowlers on that day set the bar for those who follow, and those keglers will come to town, post their own scores and then head home to see how their scores will hold up against competition to come. On Day 107, the final day of the competition this July 7, the highest score in each event wins, while the field as a whole gets paid 1:5 per event.

Bowlers and their guests are expected to be in town for three to four days, with only some 10 hours spent actually on the lanes, Cannizzaro said. Bowlers are able to select when they are able to come, keeping the flow of traffic steady from the first day through the last.

Hundreds of bowlers will be in and out of town each day, Cannizzaro said. Many of them will visit shops and restaurants in their idle time, and travelers will certainly need places to stay.

But that boon to the Syracuse economy started months ago.

“The impact to the local economy began with the start of construction,” Cannizzaro said. “More than 30 truckloads of materials were brought into the venue, and more than $1 million was spent locally for materials. When the event concludes, all salvageable materials are expected to be donated to a local charity like Habitat For Humanity. During the event, the city can expect an impact of $75 million to $100 million.”

Although the end result is quite impressive, construction of the 48 lanes at the convention center had some challenges.

“It was like trying to put 10 pounds of potatoes in a five-pound sack,” admitted tournament director Duane Hagen, “but it came together beautifully. It’s so compact you can see everything from everywhere in here.”

“It went along really well,” added Tyler Strickland, supervisor of the Bowlers Journal Championships held concurrently at AMF Strike ’N Spare Lanes, 1777 Brewerton Road. Strickland came in from Louisiana in January to help with the construction. “I think we did a really good job over there, and in July I get to go back and help tear it all down.”

George Cavanaugh, owner of the Striking Results Pro Shop at Strike ’N Spare, said he has seen many of the local bowlers practicing there for their own time on the convention center’s lanes. Cavanaugh wasn’t sure what to expect for his own services — there are ball and equipment dealers right there at the center — but promised to bowlers “if they need me, I’m ready.”

He said he bowled well in the 1999 Open Championships, but admitted he’s aged a bit since then. He’ll be back this year, he said, but with so much happening now at Strike ’N Spare, he was looking at a slot in the later part of the summer for his own entry in the tournament.

“I’d rather bowl in June so I can get the season over here, and get down to some practice time first,” he said.

Strike ’N Spare is the host for both the Bowlers Journal Championships and the Forty Frame Game, tournaments that travel the country along with the Open Championships. In cities with large enough venues, all three are held in the same place, Strickland said. Both Strike ’N Spare-hosted events also run through July.

Forty Frame Game tournament director Tres Smith said he especially enjoys the big reunion of bowlers that happens every summer wherever the tournaments are held.

“I get to meet different people from all over the country each year, and then it’s great to see them again the next year,” he said. “It has really turned into a big social event for us.”

Fans are welcome to come out and join the fun of the USBC Open Championships — even if they aren‘t participating in the tournament. The Pirro Convention Center, 800 S. State St., is open to the public, and competition will take place daily from 7 a.m. until about 3 a.m. The USBC encourages fans to have some lunch, check out the vendors and souvenir area and watch some of the best bowlers in the world.

To keep up with the latest scores, or to check the substitute board for any openings, visit bowl.com/openchamp.