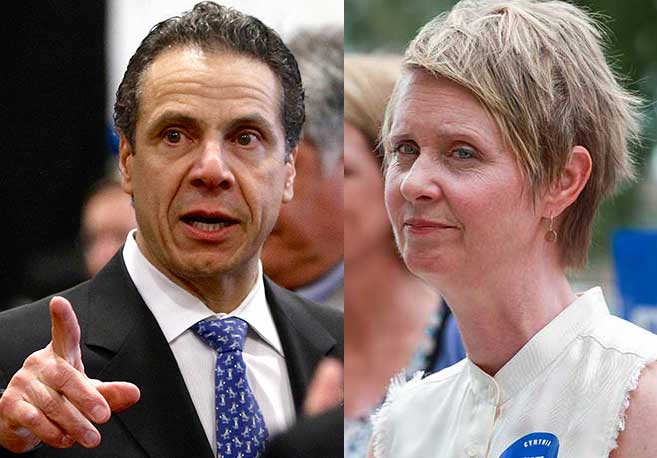 The Aug. 29 televised debate between Gov. Andrew Cuomo and Cynthia Nixon may have been about two candidates seeking a state office, but it was hard to tell.

That’s because the two Democrats running for New York governor spent the majority of their time onstage squabbling about who is least like Donald Trump, the condition of New York City subways and whether or not the incumbent plans to run for president in several years.

For the amount of aggressive language the two used toward each other — Nixon at one point said “Can you stop lying?” and Cuomo called Nixon “a corporation” — there was certainly a lack of aggression when addressing the issues that matter to people north of Westchester County.

Despite an hour-long debate, upstate New York was absent from the talking points that either candidate put forward. They talked about labor strikes in New York City, but not the loss of labor from the hundreds of thousands of longtime citizens who have moved out of the upstate region and taken their skills to another state. The candidates talked about the politics surrounding the Tappan Zee Bridge, but not about the 20 percent of the state’s bridges that are “functionally obsolete.”

Read: “Cuomo is not running for president, though his actions suggest otherwise”

There was no mention of storing oil trains in the pristine Adirondack Mountains or incinerating trash in the beautiful Finger Lakes. There was no mention that Central New York, the North Country and Western New York have seen decreases in workforce participation while New York City and the Hudson Valley have seen increases.

Yes, Gov. Cuomo and Cynthia Nixon addressed many topics that would certainly have statewide interest. They spent extensive time talking about runaway corruption in the state capitol, the future of healthcare and the prospect of legalizing marijuana, among others. But in running for statewide office, both candidates seemed to neglect those who live in 95 percent of the state’s geography.

Both Cuomo and Nixon were lambasted with criticism for days afterward. Former Syracuse Mayor Stephanie Miner, who decided to run for governor as an independent after deciding against challenging Cuomo in a primary, tweeted that she found it “particularly disappointing that the single debate didn’t feature any questions about upstate job creation or the failure of the governor’s economic development programs.” Some members of the Republican Party even called for a second debate in an upstate location that addresses issues exclusively to upstate. But there is no time remaining before the Sept. 13 primary elections to plan such an operation.

Indeed, you would think both candidates would want to improve their pretty poor popularity or attention that upstate voters have awarded them. In his 2014 re-election, Cuomo only won a handful of counties in the entire upstate region. And a July poll from Siena College found the Republican gubernatorial nominee, Marc Molinaro, was leading Cuomo by six points in a hypothetical matchup.

For her part, Nixon’s connection with upstate has been more rooted in jokes than a serious campaign for office.

There are times when the argument about upstate being ignored by downstate can get seriously overblown. The two regions are partners and more codependent on each other than we realize.

But there is a strong frustration among many upstate residents that they are too often regarded by their government as second-tier citizens to those who live in the city. And when a debate between two Democratic candidates running for governor fails to address upstate issues at all, who can blame them?

Cuomo is not running for president, though his actions suggest otherwise
‘Fallen angels,’ ‘demonic entities’: Encountering extraterrestrial xenophobia
To Top