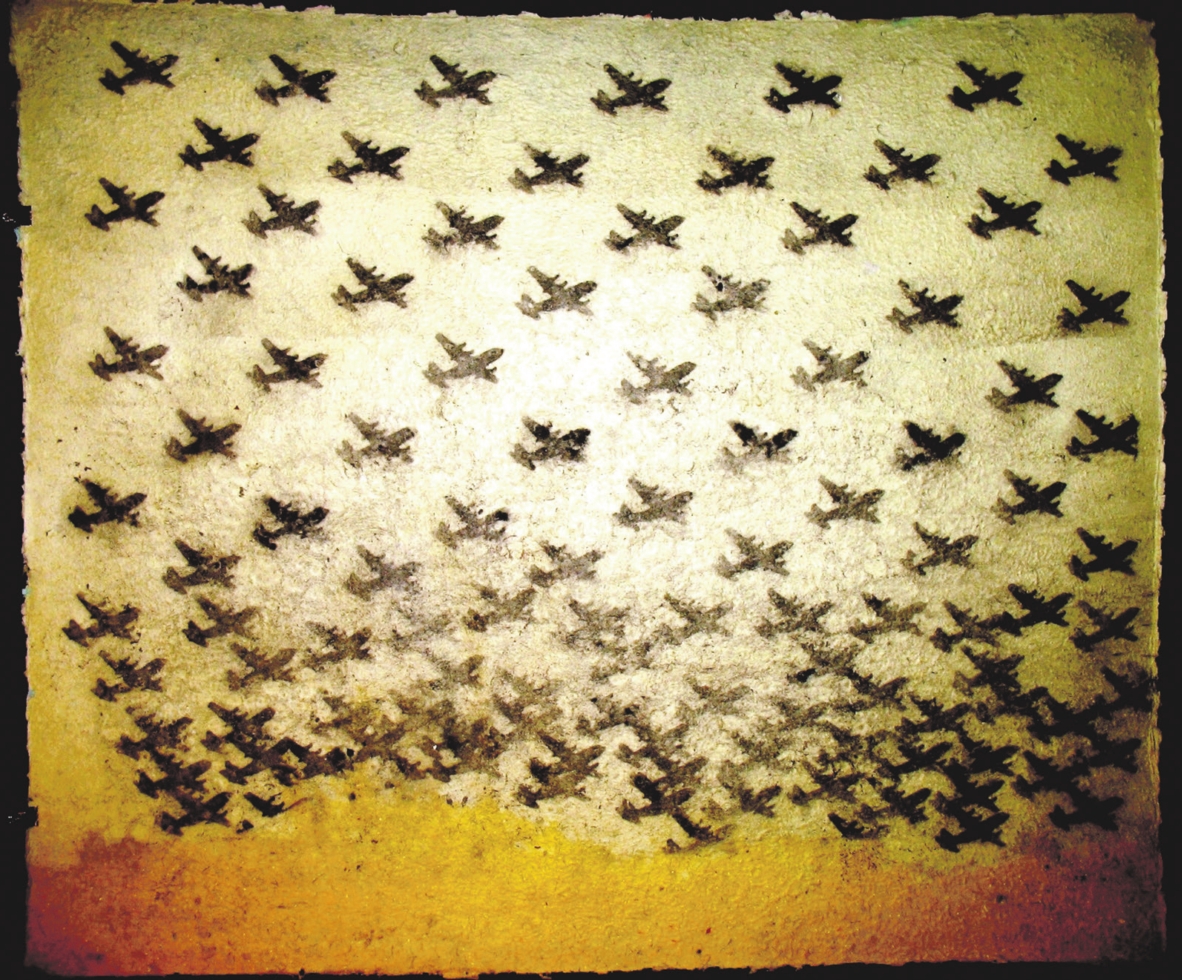 Five years ago, ArtRage Gallery collaborated with Combat Paper, a group of combat veterans striving to reclaim lives through art, on a ground-breaking exhibition. It was both ArtRage’s first show and the first time that Combat Paper participants showed their work in a gallery setting.

The two organizations have reunited for an artistic follow-up, Combat Paper Redux. The new exhibit features pieces by a roster of artists, most of whom are veterans. They created work using paper made from military uniforms, a material known as combat paper.

Thus, in “Pay Our Taxes,” Nathan Lewis did pulp painting on paper, depicting missiles, guns and shells, and the outline of a human figure in fragmented form. That’s only one style of work seen in the exhibit. Drew Cameron created “Suicide,” whose blank space symbolizes an emotional and spiritual void.

Certainly, many of the pieces are concrete and thought-provoking. Cameron and Jon Michael Turner worked together on an artwork in which a torn, shredded camouflage shirt is embedded in paper. Similarly, Guiseppe Pellicano created “Mask Memories,” with its image of a gas mask on paper. A third work, “Open Wound,” is direct and head-on in its approach: There’s a gaping hole in the paper.

Elsewhere, the show presents Nick Raven’s silkscreen portraying a soldier next to camels, John LaFlage’s pulp painting on paper depicting dozens of tiny warplanes, and Donna Perdue’s “Amani, My Culture,” a large black-andwhite image of a woman wearing a veil.

On a table, the exhibition displays artists’ books and a solitary pair of boots.

ArtRage, it should be noted, is one of three galleries currently showing Combat Paper works. The other venues include a gallery at Tufts University, and the Herron School of Art and Design in Indianapolis, Ind.

Beyond that, the Combat Paper project has expanded its operations. It still focuses on making paper for veterans doing art and does that at four sites around the United States. It also operates a small, independent press that publishes stories, poetry and other writing by veterans.

And Combat Paper staff has run a series of workshops designed to help veterans heal. That’s happened at such diverse locales as the San Francisco County Jail, located in San Bruno, Calif., and the Walter Reed National Military Medical Facility.

In an effort to detail the growth of the Combat Paper project, ArtRage has scheduled several programs in conjunction with the current exhibit. On Oct.

3, 7 p.m., the gallery will screen Wartorn: 1861-2010, a documentary about post-traumatic stress disorder. Then on Oct. 8, 7 p.m., it will show a movie about Combat Paper, Iraq Paper Scissors. And on Oct. 17, 7 p.m., veterans from two writers’ groups, one based at Syracuse University and the other in Ithaca, will read from their work. o