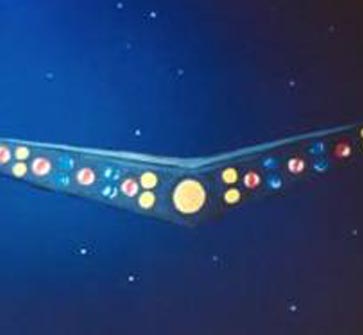 It was a summer evening in June 1983 in Hopewell Junction (near Poughkeepsie). Some people were celebrating Fourth of July a week early and were shooting off some fireworks.  As they were setting up for a second round of bangers, they began hearing a humming sound.

They looked up to see a collection of bright lights in the shape of an arc.

Within moments it was clear to all of them that hovering above them was something resembling a huge disk. They report that it was the width of perhaps 16 or 17 houses and that it literally covered Jefferson Park. Of course, being dark, it was difficult to discern the exact features. The one thing that spooked all of them was that it was silent as a tomb as it hovered over them. After a few minutes, the craft began humming again, turned and left at incredible speed.

Then there was sighting over the IBM facility in East Fishkill. It was a cold November evening in 1986. At about 9 p.m., the second-shift workers were returning from lunch. The observer reports that a huge triangular craft, dark in color, was hovering over the plant. It had four lights on it, one at each point of the triangle and one in the center.

The object was reported to be perhaps a few hundred feet off of the ground and was estimated to be 1,000 feet long.

He states that he licked his finger to determine wind direction and noted that the craft was leisurely and silently moving across the wind. He watched the craft move away from the building and fly out of sight.  When he reported the event to the New York State police, he was asked about 15 questions related to direction and speed. Then he was told it was probably a group of ultra-light aircraft.

20 Oct: At about 7 p.m., a Germantown resident reported seeing a very large, bright stationary light over Hudson River near Saugerties/Kingston. During the event, smaller lights were seen flying toward the bright light. The object was later obscured by a cloud.

20 Oct: At about 9:30 p.m. in East Northport, a resident reported seeing a large chevron-shaped object at high altitude. The chevron was reported to have pulsing green and white lights.

23 Oct: At about 4:21 p.m. in Akron, a resident was taking photos of some unusual storm clouds moving into the area near his farm. During this effort, he observed a cylinder-shaped object with C-shape parts and a bright light below. The object had visible vapor trails.

26 Oct: At about 7:15 p.m., a motorist traveling out of New Jersey northbound on the state Thruway spotted four lights hovering with changing patterns. In the northern sky, the lights rotated and would move close together then spread out to about the wingspan of a large airplane. Then the lights rotated into a ball-like form then stretched again; this cycle repeated.

In a related sighting, 26 Oct, at about 9:45 p.m., a Brooklyn resident observed four lights circling above the Verrazano Bridge before they continued moving north of the bridge and continued their pattern of hovering and circling. After about 25 minutes of this activity, they simply disappeared.

30 Oct: At about 12:54 p.m. near Glens Falls, a motorist driving on Interstate 87 observed a long reflective distant wire descending from cloud to the tree line. After another couple of minutes, its upper connection to the clouds terminated and it fell behind the tree line. It was as if a shiny massive fishing line fell, following its own path perfectly and ended behind the trees.

1 Nov: At about 9:30 p.m., a resident of Oyster Bay went out on the balcony for a smoke and witnessed a very bright light, in the northwest toward New York City. While watching the object through a cellphone camera, the witness noted that the light was cigar-shaped. The observer stated that the object seemed to have radiant lines escaping from the center. After perhaps a half an hour, it just vanished.

If you would like to hear about the history of UFOs in New York, join me at the Onondaga Free Library on Sunday, Nov. 17, for a lively talk. All are welcome and admission is free. Visit our website for all the details.

If you have a New York a UFO story to tell, I’d love to hear about it. All respondents’ names will be kept confidential. Email me at [email protected]

Negotiating Reality: Adventures in 3D at the Fayetteville Free Library
Can You See the Alien Spacecraft in the Front Yard?
To Top