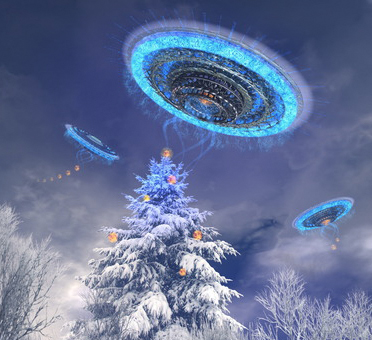 UFO sightings made by our fellow New Yorkers during past Christmas holidays.

Christmas Eve night has a special wonder for many. On a clear winter’s night, the stars are bright, and if you lean up against a tree or a fence post and lay your head back, it’s easy to get lost in the spectacle of all those stars. In the spirit of the season, let’s explore the UFOs of Christmas past.

It was Christmas Eve 1971. I was an airman first class assigned to the 1881st  Communications Squadron at the huge U.S. Air Force base at Cam Ranh Bay, Vietnam. It was about 11:30 p.m., I was walking west on the lane that would take me to the base chapel for midnight mass.

The sky was crystal clear. Cam Ranh Bay was only a couple of degrees of latitude north of the equator. For a kid who grew up in upstate New York, it was bit discomforting, because we were too far south to see common constellations like Ursa Major, aka the Big Dipper, in the northern sky.

As I looked into the western sky, I could see the constellation Perseus and, above that, Taurus. High in the sky above them was the constellation Orion, with its left shoulder star of Betelgeuse bright as ever.

Suddenly I saw a bright star-like object zooming from the north across the western sky just below Taurus. My first impression: “Oh, it’s a meteor or perhaps just some fighter jet.” Then the object just STOPPED. It hovered  there below Taurus for perhaps a minute or two. Then it seemed to dance or dart around before it dashed off toward the south at tremendous speed until it just “winked out.”

I was 19 years old; I didn’t know what to think. About all I could say was, “Wow!” During midnight mass, I was not with the program at all; I was replaying what I saw over and over again in my head. Fearing my Air Force peers would think I was intoxicated or worse, NUTS, I kept the sighting to myself for many years until I shared it about 15 years ago to a couple of Native American folks I used to know. Now, I’ve shared with you a deeply personal sighting as a holiday gift.

Here are some of the UFO sightings made by our  fellow New Yorkers during past Christmas holidays:

Christmas Day, 1999 at about 7:30 p.m., a Poughkeepsie resident had received a telescope for Christmas and was on the home’s deck attempting to star-gaze, as the sky was partly overcast. Suddenly, in the northeastern sky, he saw a large chevron/boomerang shape moving slowly under the cloud layer. The object had a slight orange glow and was absolutely silent. The observer lost sight of it as it passed beyond the tree line.

Christmas Day 2000 at about 6:30 p.m., a Buffalo woman went outside to fill the bird feeders and witnessed a boomerang-shaped object traveling westward quite fast, its shape defined only by its slight glowing white luminance. She lost sight of it when it just “disappeared.”

Christmas Eve 2006 at about 7:30 p.m. near Arcadia, a motorist and passengers saw a craft gliding across the top of the hill from one cornfield into another. It was dark gray with no lights, and massive. They report that they could not see the beginning or end of it. It moved more smoothly than anything any of them had ever seen. Then it disappeared.

Christmas Day 2007 at about 2 p.m., a Copiague resident went outside for a smoke. He looked up and saw a spherical white object leisurely cruising along in the northeastern sky moving west. He watched it for perhaps 20 seconds, then glanced away to get his phone to record it. When he looked back, it was gone. A veteran observer, he comments, “There are really truly some strange things in the skies over Long Island!”

Christmas Eve 2007 at about 2 p.m., an Astoria, Queens, resident made a 12-second sighting from the East River shore. The sighting involved a very big, dull, wingless object moving westward “20 times faster than any other craft in the sky.”

Christmas Day 2008 at about midnight, a New York City resident on his building’s roof observed a super bright object in the southwest sky. It was observed as stationary in the sky and wasn’t moving across the sky like the stars. Members of his household observed the bright stationary object for about an hour, when it disappeared.

Christmas Eve 2009 at about midnight, a motorist and passenger in Fairview saw two odd lights. Upon closer observation, it was clear to them that it wasn’t airplane or helicopter. They had pulled over and saw other people looking at the two UFOs flying together. The sighting gave the two of them the creeps, so they promptly left the area.

Christmas Eve 2011 at about 7:30 p.m.,a motorist and passengers in the Brewerton area witnessed in a clear sky a yellow-orange fireball object flying east to west, low in the sky. They report that the object appeared to have helicopters following it. The object appeared to stop, and as they watched, the fireball object they noted, “… suddenly it shot to the sky at a great speed and disappeared.”

Christmas Day 2011 at about 7:30 p.m., three Holbrook residents were riding in a car on the Long Island Expressway when they spotted “four golden lights sitting in perfect alignment across the sky.” They report that the lights were very bright. They pulled off at an exit, but the objects were gone.

Christmas Eve 2011 at about 7:45 p.m., a Northport resident observed a bright red object moving silently and slowly across the sky. The object was reported to have occasionally stopped in its motion just before disappearing.

Christmas Eve 2011 at about 9:30 p.m. a Long Island resident witnessed a rapidly moving formation of six orange fireball objects ascending, then each of the fireballs winked out one by one.  The observers say there were no blinking lights or strobes.

Christmas Eve 2011 at about 9:30 p.m., a New York City family went outside and noted a number of their neighbors outside, as well, looking at the sky. What they were all looking at were two bright orange fireball objects flying in the sky above them. The objects flew around a little bit, then hovered, then flew around some more. Finally the fireballs stopped, hovered and disappeared. While they were all talking about what just happened, yet another orange fireball UFO showed up, put on a little show and disappeared.

Christmas Day 2011 at about 11:00 p.m., a Wantagh resident heard a visiting friend exclaim, “What the hell is that light?” The pair ran outside, and directly above them were two huge bright orange vertical cylinders moving eastward. After a few minutes, the objects changed their orientation slightly and winked out. They report that the whole household was frightened afterwards.

Christmas Eve 2011 at about midnight, a resident of Bleecker reported that a bright red object moved rapidly across the local sky. It did some stop-and-hover maneuvers, then proceeded in its travel. The observer states that there was a local police response and military presence shortly after the sighting.

Christmas Day 2012 at about 8 p.m., an Amherst resident was leaving a Christmas party and witnessed some strange lights. He called back to the rest of the party, and together they all observed three silent orange lights, initially traveling horizontally at about 500 feet. Then the objects rose vertically till they disappeared.

Christmas Day 2012 at about 8:45 p.m., a motorist and passengers from Pine Bush were driving on state Route 302 and witnessed a Y-shaped formation of bright red lights. They report that multiple cars pulled over watching the formation of up to 20 lights. After a few minutes, the lights vanished. The observers state that they were all “pretty scared.”

Christmas Day 2012 at about 11 p.m., a Port Jervis couple and their daughter witnessed a pair of bright red objects flying west to east. They watched the object for about 15 minutes before the objects vanished.

If you have a Christmas UFO story to tell, I’d love to hear the when, where and what. Email it to [email protected]. The names of witnesses will be omitted to protect their privacy.

Poverty is Overwhelming
Points of Reference: Year-End Edition
To Top