32.8 percent of 17 years’ worth of UFO sighting reports featured exotic UFO shapes — shapes that have a high probability of not being man-made.

It’s funny how publishing UFO sightings numbers scares the hell out of some people. Many have written to me, “They (UFOs) can’t all be real!” They reassure themselves with the notion that UFO reports are largely misidentifications, and the product of kooks and crackpots.

A number of other people who have purchased my book UFO Sightings Desk Reference seem to go out of their way to twist my words and suggest that I think only 7 percent of UFO sightings are real. Then there are the debunkers who fail to accept good research and data. These are the folks who have their own opinion, and, by gosh, they’re right!

An important step in the scientific process is gathering data for analysis. My co-author Linda Miller Costa had an opinion she arrived at after editing and assembling the first draft of the publication. In 2018 she said, “The Truth is in the Shapes!” More recently she stated, “The diversity of exotic UFO shapes suggests a wide variety of species and builders.”

Let’s take a look at a recent analysis I did that is ruthless in its removal of questionable UFO shapes. For the purpose of this study I have eliminated any UFO shapes that either could not be clearly described or shapes that might easily be viewed as man-made. I caution my readers to not be emotionally attached to a favorite shape I’ve excluded. I eliminated all undefined shapes as well as triangles; yes, I know they are as big as a football field, and they could be an experimental TR-3B, I’m told regularly. Boomerang and Chevrons must also be removed because they reasonably could be some advanced bomber or fighter aircraft. I took out cigar, cylinder, bullet and bullet/missile shapes because most reasonable people would agree that these shapes might be an airliner seen from the side. I think you get my point. 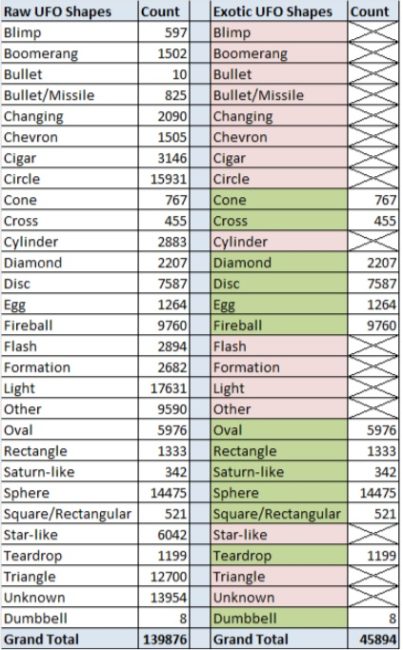 Remember the objective: What we wanted was only exotic shapes, UFO shapes that have high probability for not being man-made. The numbers in the chart reflect the combined NUFORC (National UFO Reporting Center) and MUFON (Mutual UFO Network) sighting reports from 2001 through 2017. The total is 139,876 and the exotic shapes’ sum is 45,894, a whopping 32.8 percent of 17 years’ worth of UFO sighting reports. Spread evenly over 17 years, that would be about 2,699 per year and approximately 224 per month. In my estimation, those kinds of numbers are still something significant to talk and write about. I’m not saying that the other 67.2 percent of the UFO sightings are noise, either, only that 32.8 percent of UFO sightings stick out as not made on earth.

An eyewitness account can get you convicted in any court in this country, in the absence of forensic evidence to the contrary. Here we have 45,894 eyewitness accounts of something bizarre flying in the sky. These eyewitness reports represent a body of evidence; a preponderance of this evidence should give a skeptic pause