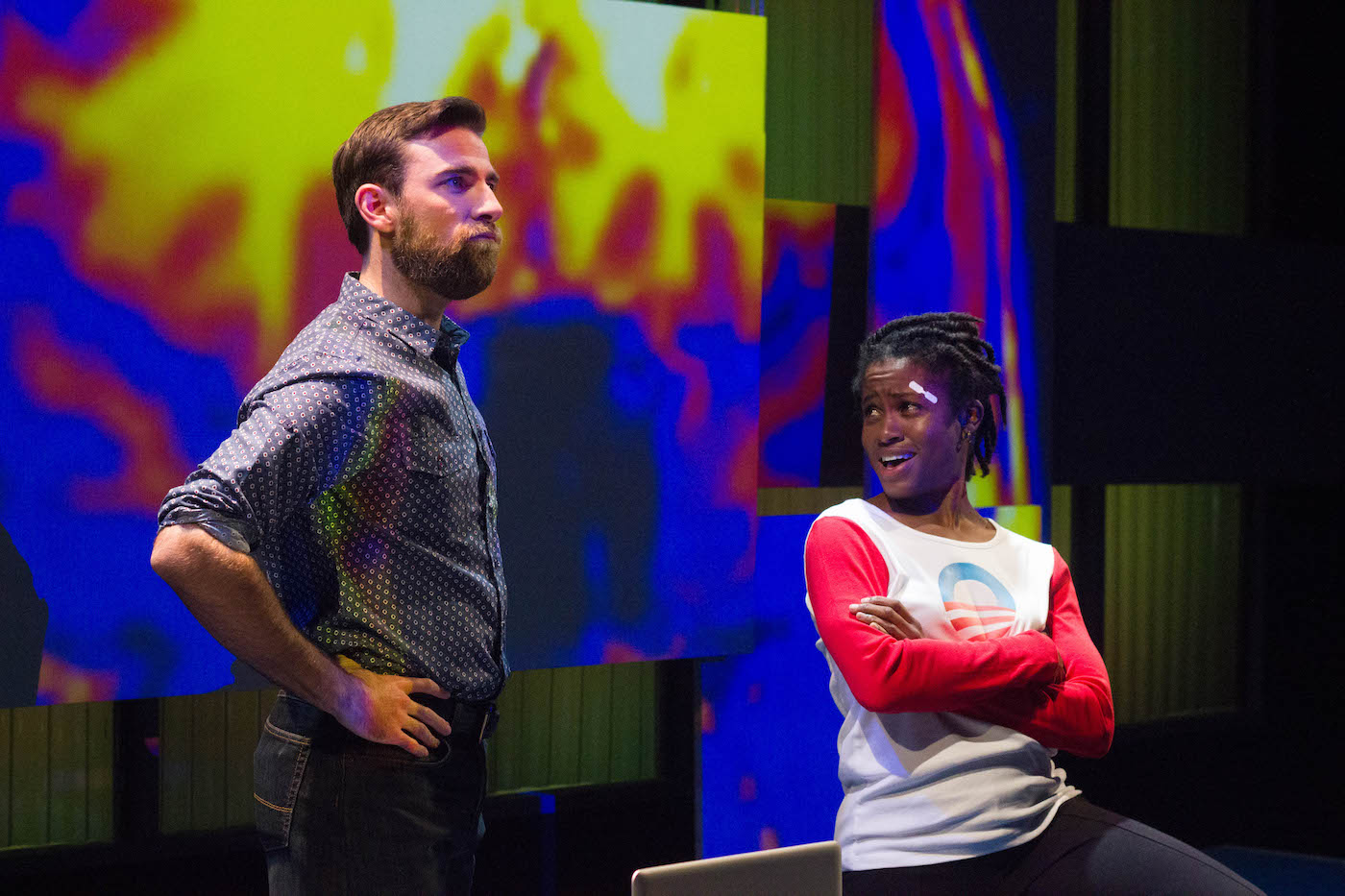 Jazz Central’s “An Act of God” parodies divine figures in a tasteful manner.

Young playwrights take on the most daunting of themes without blanching. How about divining the nature of the Divinity in one show and resolving the nature vs. nurture debate in another?

One looks almost like a comedy routine (sitting on a throne, not stand-up) but with profound implications. That would be David Javerbaum’s An Act of God, which ran on Broadway in 2015. Rarely Done performs the show through Sept. 30 at Jazz Central.

The other, set on the Harvard campus, has four characters using erudite language while shouting at one another, lightened by recurrent comic interludes. It’s Lydia R. Diamond’s Smart People, which opened in Boston in early 2016, and is now at Ithaca’s Kitchen Theatre Company through Sept. 24. Central New York theater is only one year behind being up to date.

While An Act of God was a hit with TV’s Jim Parsons in the title role, many audiences will recognize the property from more than that. Three years before Broadway, Javerbaum, a writer for The Daily Show and Stephen Colbert, published The Last Testament: A Memoir By God, an unanticipated success. This spawned a Twitter account that acquired more than 1 million followers, many of whom are quoted in An Act of God. It’s one of the first stage works that adapts to the new rhetoric of the internet: quick updating, lots of short speeches, never more than 140 characters. Some gags appear to be written a few days before the show’s opening. Although Jimmy Curtin has been a welcome comic presence in many shows, he is a tall guy with the body of an authority figure. When he sweeps on stage in his white flowing robes (green plaid shirt visible at the collar), he quickly dominates the scene in ways that Parsons could not. Curtin is also highly physical, often throwing his whole persona into a punch line. Upstage there’s a screen with rapid change of projection. When God says he does not hate gays, the rainbow flag pops up.

Stage manager Dusten Blake, who handles the visuals, is wearing wings. So are the two assistants, Gabriel (Peter Irwin) and Michael (Michael-Dean Anderson). Gabriel is usually a perfect stone-faced straight man, except for one burst of giggling, while Michael is an errant boy, wondering off to coax questions out of the audience.

Although God balks at the question about his answering prayers, some of which he calls “panhandling,” the show does not mock piety or the faithful. It shies away from the aggressive atheism of a Sam Harris or Richard Dawkins and has more in common with the playful skepticism of Sportin’ Life’s “It Ain’t Necessarily So” in Porgy and Bess.

God says he is going to revoke the Ten Commandments and replace them with new ones that sound similar: Thou shalt take the name of the Lord thy God in vain. On the screen we see the figures of Matthew McConaughey and Kanye West smarmily giving thanks for their “God-given talent.” God snorts, “Keep that up and it’s going to be your taken talent.”

Action begins in September 2007, when Barack Obama launched his campaign for the presidency, and, not coincidentally, the iPhone was released. The setting is Cambridge, where characters are either affiliated with Harvard University or pass by the campus, thus the title Smart People.

In an interview published in the program, playwright Diamond tells that she prepared to write the play by reading scientific papers that were “barely written in English.” She evidently feels that some of her characters, such as haughty neuropsychiatrist Brian White (Jake Lee Smith), talk like that all the time.

Although White is the only white character (wait for the joke on that) in Smart People, like all four in the cast, he seems not so much a human being as a walking CV with a diversity tag. Jackson Moore (Bryce Michael Wood) is an African-American intern at Harvard Medical School, where he feels his authority under challenge. Ginny Yang (Shannon Tyo) is a hard-driving Asian psychology professor at Harvard, who advertises her conspicuous consumption by flaunting her bags from all the right stores. Then there’s the black actress Valerie Johnston (Folami Williams) in dreadlocks, who wants to perform in Shakespeare.

Thematically top-heavy, Smart People takes on more issues than could ever be resolved in more than two hours of rapidly spoken dialogue, driven by director Summer L. Williams. They include race, class, identity, consumerism, prejudice and gender.

Despite the grandeur of playwright Diamond’s ambitions, her best moments are the small ones. After Valerie bloodies her head on some stage equipment, she’s taken to the emergency room where Jackson asks if this is the result of domestic violence, presumably because she is black. Simultaneously, Valerie assumes that Jackson is of lower rank than an actual M.D., a victim of the same presumptions.