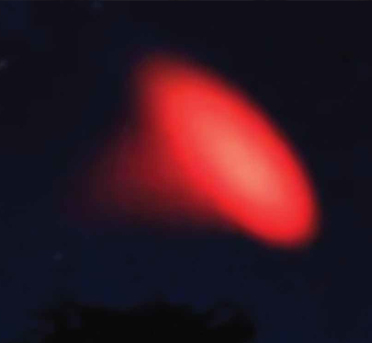 Check out this story of a man who saw a pair of bright red UFOs.

In early November 2014, Charles exited Interstate-84 westbound at exit 17 for Holmes, N.Y. As he came to a stop at the end of the ramp, facing north, he observed two bright red UFOs in the sky ahead of him, at about 10 o’clock high.

His first assumption was that they were simply local aircraft traffic. Although he did think it was a bit unusual to see a couple of airplanes traveling that close together. “I watched a moment longer and noticed that they were stationary. They were definitely two bright red UFOs hovering. I naturally assumed they were helicopters, though the red lights were unusual compared to other helicopters I’ve seen at night.”

Intrigued by the odd phenomena, Charles pulled off onto a side street and parked so that he could confirm that the lights weren’t moving. As he studied the two red lights, one of the red lights went out and was suddenly replaced by a triangular formation of white lights. The triangular formation of lights and the other red light began moving together. It appeared as if the two objects were connected.

Charles points out, “At this time they were still a short distance apart from each other.” Then just as suddenly, as before the remaining red light went out and was replaced by the same triangular pattern of brightness white lights as with the first object. The two triangles began moving together very closely. “If you drew two triangles of three dots each, the two would “share” the center dot.”

He says they began moving westward, quickly at first, and then the objects paused in place for a few seconds. Then they abruptly took off at incredible speed and were quickly lost from view as they seemed to gain altitude.

Charles remarked, “I’ve seen military fighter jets travel in that close a formation at air shows; they were loud, and these things made no sound what so ever.”

Let’s look at some other recent UFO sightings in New York Skies:

10 Nov 2014: At about midnight a star gazing resident of Glendale, N.Y. saw a triangle shaped object block out the stars and the moon as the triangle silhouette moved across the sky.

13 Nov 2014: At about 10:30 a.m., a Jamesport, N.Y. resident was walking her dog and spotted a white disc-shaped object moving very fast west to east across the sky.

14 Nov 2014: At about 8 p.m., a motorist in West Seneca, N.Y. heard a loud, low hum overhead and saw a large triangular UFO with two amber lights, hovering. He reports that the object took off at tremendous speed.

15 Nov 2014: At about 9:15 p.m., a resident of Amherst, N.Y. witnessed a very bright red pulsating light ascending into the sky in a straight path until it eventually disappeared.

17 Nov 2014: At about 11 p.m., a Brooklyn, N.Y. resident was star gazing and observed a cluster of 5-6 dull orange objects flying in a triangle formation.

19 Nov 2014: At about 3 p.m., an amateur drone pilot was flying his drone and observed a commercial aircraft being followed by white orb UFO.

If you have a UFO sighting to report, you can use either one of the two national database services: www.NUFORC.ORG or  www.MUFON.COM. Both services respect confidentiality.

Me, You, Brew and View: The Espresso Shot (#031)
#takeatour of Syracuse City Ballet
To Top