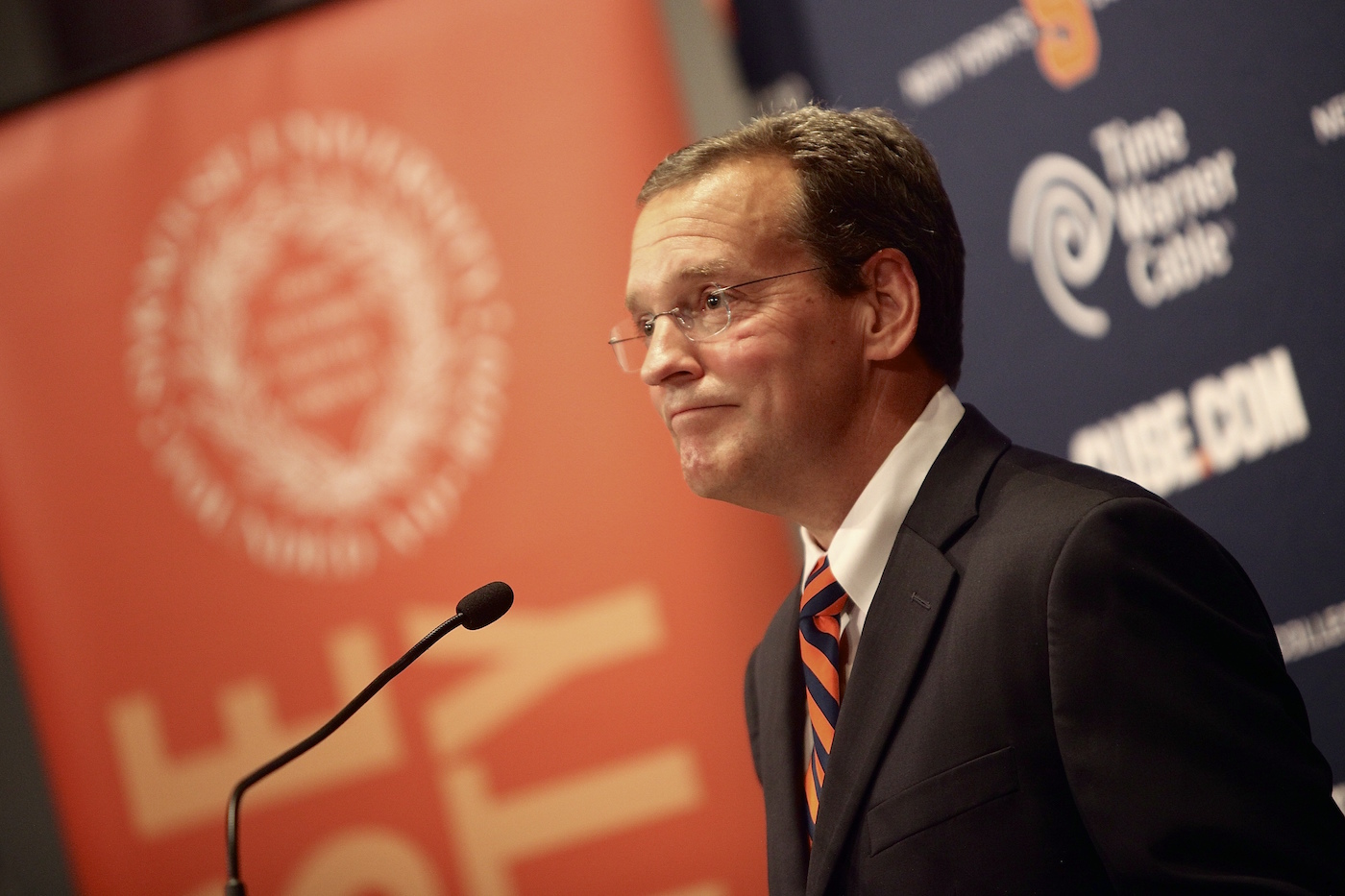 Syracuse may have finally found its AD in John Wildhack.

Syracuse University’s hiring of John Wildhack as its latest director of athletics answered one critical question and raised another.

SU Chancellor Kent Syverud announced Wildhack’s hiring last week. Wildhack was introduced at a July 12 news conference and will start at SU in mid-August. A Buffalo native and graduate of Syracuse’s S.I. Newhouse School of Public Communications, Wildhack spent the past 36 years at ESPN, most recently as its vice president for programming and production.

When former athletics director Mark Coyle bolted in May for the University of Minnesota, many SU followers wondered if new football coach Dino Babers would also look to leave. At most power conference schools, the head football coach and athletics director are tied at the hip because football TV money is what drives the bus at big-time schools. And Babers was Coyle’s only coaching hire in Coyle’s less-than-one-year reign. Not coincidentally, Babers was on the search committee for Coyle’s replacement. So Babers signed off on Wildhack, who doesn’t have the football background that would make one believe he would want to bring in his own coach.

“John doesn’t shy away from taking risks, and he’s always pushing his teams to be the first and the best,” Babers said in a statement issued by SU. “I’m eager to welcome someone of his caliber to the Syracuse athletics team and I am certain we will accomplish great things — both on and off the field.”

Meanwhile, Wildhack and the biggest man on campus — SU men’s basketball coach Jim Boeheim — are longtime friends. That poses the question that likely won’t be answered for a while but is worth asking: Would Boeheim consider changing his planned retirement date because he’s more comfortable with the man in charge of the department?

Boeheim, who just led the Orange to the Final Four in his 40th year as coach, has said he will retire after the 2017-2018 season. But there’s always been a feeling that Boeheim was compelled to make that announcement in the wake of NCAA violations against his program. Perhaps the Final Four run, a few more winning seasons and Wildhack’s presence will make Boeheim change his mind, even though he’ll be turning 72 in November.

Wildhack’s hiring was widely praised as SU seeks stability after a tumultuous stretch where former athletics director Daryl Gross was reassigned following the NCAA investigation and Coyle departed without telling anyone until he was about to be introduced at Minnesota.

Wildhack has held several leadership roles at ESPN and was responsible for many “firsts” at the all-sports network, including producing ESPN’s first live regular-season college football game in 1984 and live NFL game in 1987. In his most recent role, he oversaw all ESPN production efforts, programming acquisitions, scheduling and rights negotiations as he cut deals with the ACC, SEC, NBA, Major League Baseball and others.

“John is an entrepreneurial, outside-the-box leader who brings an unparalleled set of skills and experiences to the director of athletics position,” Syverud said in a statement. “This is a new day in the life of the Department of Athletics. I look forward to watching John, in collaboration with our talented coaches and staff, bring his bold vision for the department back to life.”

With Babers on board, the Carrier Dome renovations scheduled and the athletics department coming off one of the best years in school history, there’s not a lot of heavy lifting for Wildhack in the short term. It would seem that his primary focus will be on fundraising for the Dome and other athletic facility improvements. In the long run, his television knowledge and contacts will be an asset as new contracts are negotiated and — you read it here first — the power conferences look to become more independent of, or even break away from, the NCAA.

In a statement released by SU, Wildhack did say it was his “dream job,” which might make SU fans cringe since former football coach Doug Marrone said the same thing before leaving for the NFL and Coyle sure made it sound like he wanted to be here, too. But Wildhack’s longstanding ties to upstate New York and the school — he’s also a member of the David Falk College of Sport and Human Dynamic advisory board — should mean he’ll stick around for a while.

“To help my alma mater, in particular Syracuse student-athletes, continue to excel and grow, especially in light of the enormous investments being made and that have been made in its facilities, is a tremendous responsibility and one I don’t take lightly,” Wildhack said. “I am honored to have been selected and I look forward to collaborating with the amazing coaches and staff as we work to develop the whole student-athlete — inside and outside the classroom.”

Thompson joins an already deep Orange frontcourt that includes forwards Tyler Roberson, Tyler Lydon and freshman Matthew Moyer, and centers DaJuan Coleman and Paschal Chukwu. SU’s backcourt, on the other hand, was thinned out by the loss of Malachi Richardson (selected by Charlotte at No. 22 in the NBA draft and then traded to Sacramento), Michael Gbinije (drafted by Detroit in the second round), and Trevor Cooney.

That leaves sophomore point guard Frank Howard, freshman Tyus Battle and transfer shooting guard John Gillon in the backcourt. College and professional basketball has evolved into a perimeter game, so it’ll be interesting to see how Boeheim utilizes the strength of this year’s team in today’s game.