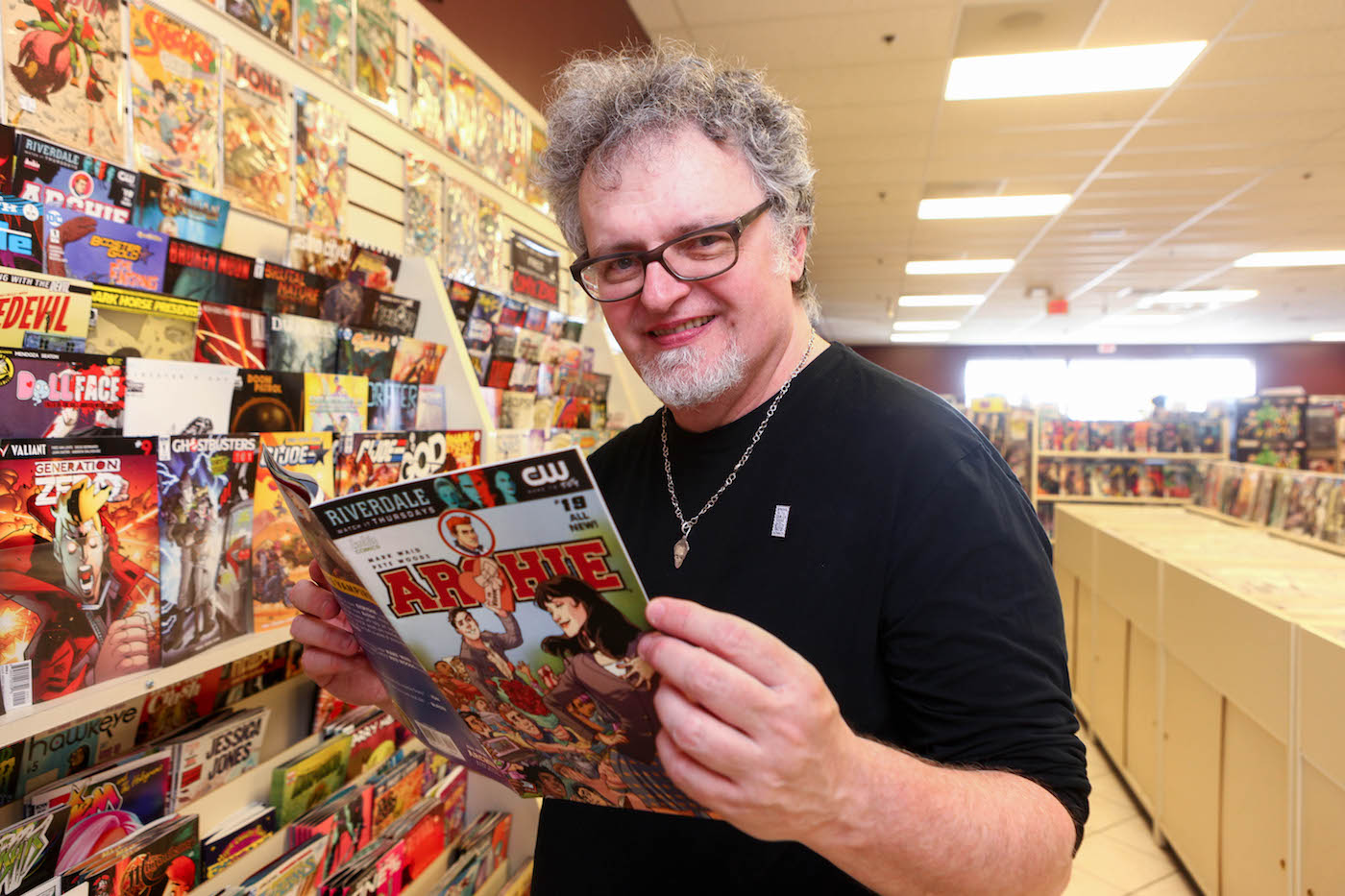 The strip, which featured random gags devoted to President Ronald Reagan, the cat of Syracuse Mayor Lee Alexander and radio stations airing an all-REO Speedwagon playlist, led to a friendship with Ithaca-based comic writer Roger Stern, known for his work on Marvel’s Spider-Man and DC’s Superman series. Thanks to Stern’s industry connections, Peyer left the Salt City in 1990 for a three-year gig with DC Comics as an assistant editor, followed by a long career as a comic-book freelancer in his hometown, with credits that stretch from The Atom to The Simpsons.

Peyer bangs out these four-color sagas on his keyboard inside his spartan downtown office, with multicolored Post-It reminder notes stuck to a wall to steer him regarding future projects. “I’ve been known to juggle four or five stories in a month,” he said, and one of those stories was the recent five-issue run of Captain Kid, co-written with Mark Waid and penciled by Wilfredo Torres for AfterShock Comics. Since AfterShock is an independent publisher, Peyer had the freedom to throw in some swear words for the adventures of a melancholy middle-aged sad sack who has the power to transform himself into a teen superhero. 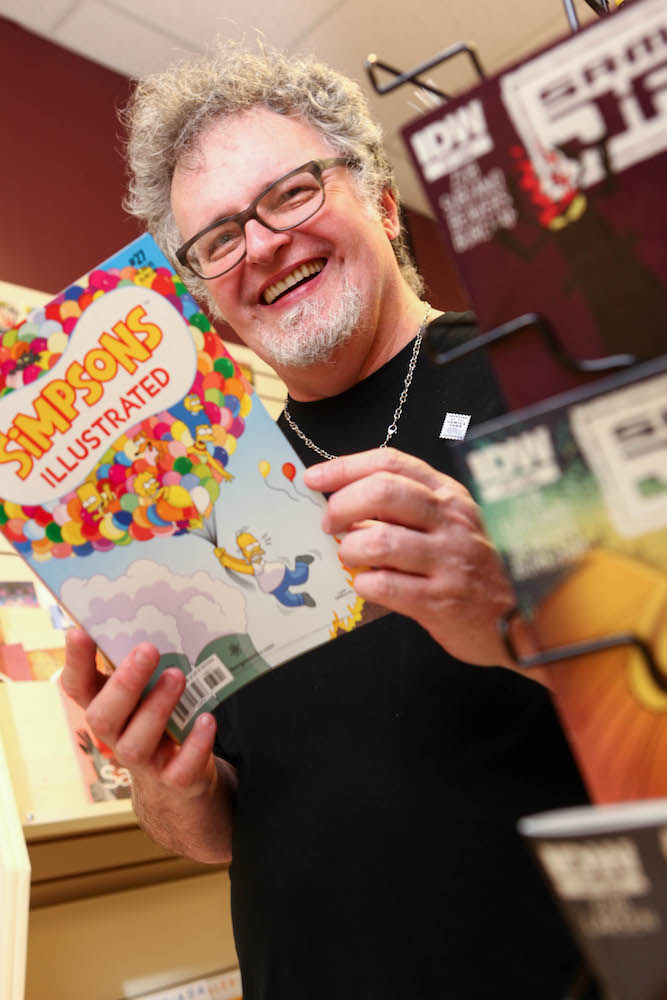 For those who haven’t snapped up the issues, there will be a Captain Kid hardcover collection debuting June 7. And for those who want to meet Peyer in person, he’ll be hobnobbing alongside wrestler Sergeant Slaughter and iconic artist Neal Adams at the Salt City Comic-Con on June 24 and 25 at the Pirro Convention Center. And he’ll certainly be venturing out for Free Comic Book Day, slated for Saturday, May 6, at area comic shops.

What is the first comic book you can recall reading?

Superman No. 140 from 1960. It was a story called “The Son of Bizarro,” in which the imperfect duplicate of Superman known as Bizarro No. 1 and his wife, Bizarro Lois Lane No. 1, have a kid and it comes out human. They actually send the kid to Earth because they can’t have a human in Bizarro World, where everything is the opposite of all earthly things: They hate beauty and love ugliness. It’s a big crime to be perfect in Bizarro World, so the kid would be miserable there.

So it’s a really tragic story by writer Otto Binder and artist Wayne Boring about a family giving up its baby, and it ends up in an orphanage where Supergirl lives and she takes care of him. It takes some twists and turns but, in the end, the baby becomes a Bizarro and gets back with his parents.

This story must have blown you away at age 6.

It did blow me away (laughs), and I still re-read it from time to time. It has so many of these fraught family issues, and it was dramatic. It would not be overstating to say that Superman No. 140 wrecked my life.

Where did you buy comic books during your wonder years?

Back then I lived on the West End, around Avery Avenue and West Genesee Street. So there was a Daws Drug Store in the Westvale Shopping Plaza, where I would pester the clerk for the new comics; he was really annoyed by me. (Laughs) There was the G.C. Murphy chain department store in Fairmount Fair that sold comics. W.T. Grants in downtown had the biggest selection of anybody. And then, of course, the basement of the Economy Book Store, with the coverless comics.

There was also Wally’s Smoke Shop and the downtown Woolworth’s. For me, a drugstore wasn’t really a drugstore unless it sold comics. So Fay’s Drugs wasn’t a drugstore to me, but Carl’s Drugs and Daws were.

Comics were the essential drug! I went to Wally’s, too, and I remember as a teenager buying the first DC Comics 100-Page Spectacular for 50 cents. And there was an old guy with a cigar behind the counter who looked at it and said, “Fifty cents! They’re gonna price themselves right out of business!”

Were you a DC or Marvel Comics loyalist, or did it even matter?

I never understood people who felt they had to choose. I really liked the differences between the two. I started with DC, and I liked Marvel Comics a lot because of their flashiness, but nothing would ever make me give up DC’s Batman and Superman.

It was a great time to read comics. And they were cheap; you didn’t have to take care of them. You could roll them up and put them in your pocket. A kid from a poorer-than-average family could afford to read all the Marvel or DC comics each month.

Did schoolteachers ever take comics away from you?

They certainly knew to check me out for them if they were against comics. In grammar school when we were done with end-of-year exams, we could bring in comics to read. I felt like a king! 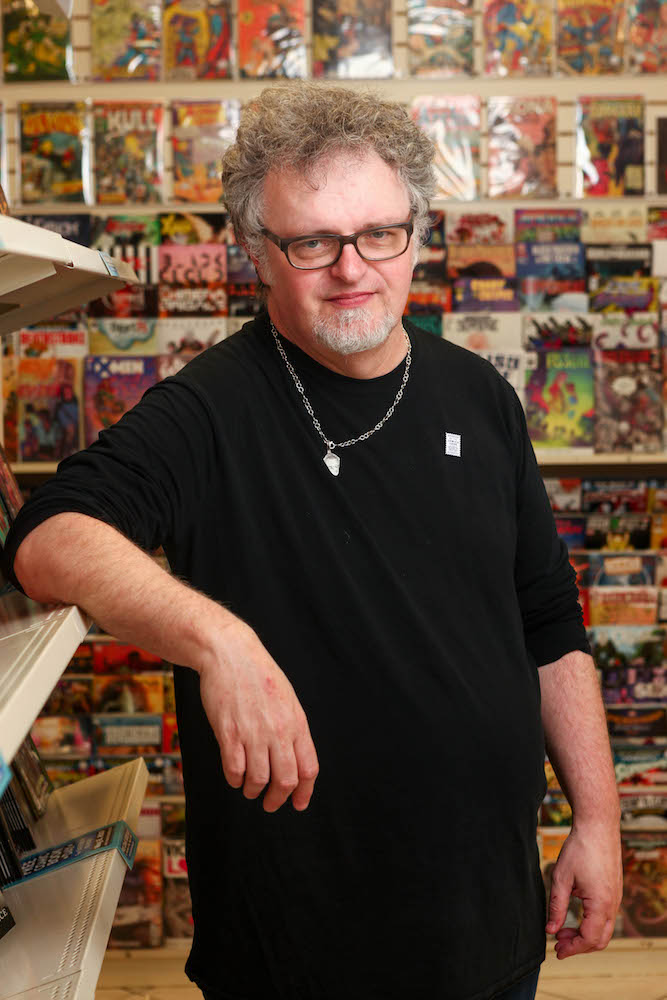 How can you keep track of all the superheroes, their super powers and their secret identities in the various comics universes?

When you’re a kid and you’re reading comics for sheer pleasure, it’s easy. But when you’re writing comics, you really depend that there is someone (in the editing phase) who will notice that you have made a mistake before it is too late.

Do you watch all the comic-related TV series and movies?

I’m more of a completist with the movies. But (director Zack Snyder’s 2013 Superman reboot) Man of Steel was horrible! When I walked out, I felt my guts had been ripped out, that feeling in your stomach when somebody dies. I said at the time that it was a Superman movie made by people who hate Superman. The guy who made Man of Steel and Batman Vs. Superman: Dawn of Justice (2016) wants to make a movie based on Ayn Rand’s The Fountainhead, which explains a lot. (Laughs.)

It’s a little harder to keep up with all the TV shows. I like actress Melissa Benoist, who plays the lead in Supergirl; she brings some of the Christopher Reeve magic to the show. But they’re all basically good shows, certainly better than anything that was on when I was a kid.

For the five-issue run of Captain Kid, what were your deadlines to make the publishing dates?

Usually it’s about four or five months before it becomes a comic book is when I start writing it. The turnaround time is a lot quicker than it used to be, because the jobs that have to be done on the back end, like coloring and lettering, are done faster because of computers.

Lettering, in particular, would be somebody with special pens and dip bottles of ink that would make perfect letters by hand. They were like monks. Now it’s all keyboarding, although there is still artistry to it, with the placement of copy and the font designs.

Were the plots for all five Captain Kid issues mapped out in your head?

The way I like to work is some of it is mapped out, and some of it isn’t. Because of it is all mapped out, all I’m going to communicate as I write the scripts is my boredom. So you have to leave some room for serendipity, because sometimes you get your best ideas when half of it is already written.

Explain the working relationship you have with Mark Waid, who co-wrote the Captain Kid series.

We have written a lot together for 20-plus years, kibitzing on each other’s stories. We are the Ferrante and Teicher of comic-book writers, only we’re not side by side next to pianos and wearing tuxedos. (Laughs.) He’s based in Los Angeles, and even if were not working together, we always call each other and talk through our stories to make sure they hold together. Sometimes it’s hard to come up with something for your story but really easy to come up with something for somebody else’s story because your ego’s not in that story.

How close do you work with the artists and letterers?

Everything depends on the individual job, and it can go any number of ways. I’ve written stories where I’ve been on the phone with the artist a lot, and I’ve written stories where I have never talked to them. If it’s a long-term job, you try to make some kind of relationship with them, so you can keep writing things that the artists are interested in drawing. If they love drawing science-fiction machines, you don’t want to make them draw horses. 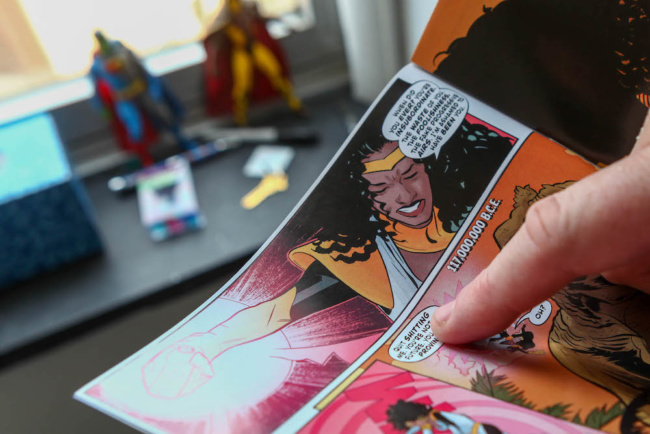 Has comic readership changed over the years?

Comics over the last few years have been a real magnet for sensitive artistic young people of all ages, races and sexualities. There’s a real overlap between comics and what some people call identity politics.

At comic conventions, I like seeing all the people having a good time, dressing up (in superhero costumes), and bringing their kids and seeing them ooohhing and aaahhing.

And what is your favorite sound effect?

I gotta go with “Pow!” I think “Pow!” is so assertive: It’s a punch. It’s the one sound effect that all the others spring from.

It used to really bother me on the old Adam West Batman TV series when someone got punched and the sound effect would be “Zap!” That sound effect comes from a ray gun!

Since 2002, Free Comic Book Day has taken place on the first Saturday in May, luring kids of all ages with the promise of freebie favorites. Hollywood usually gets on the band wagon by releasing a superhero flick on the same weekend, which explains why the anticipated sequel Guardians of the Galaxy Vol. 2 is hitting the multiplexes. 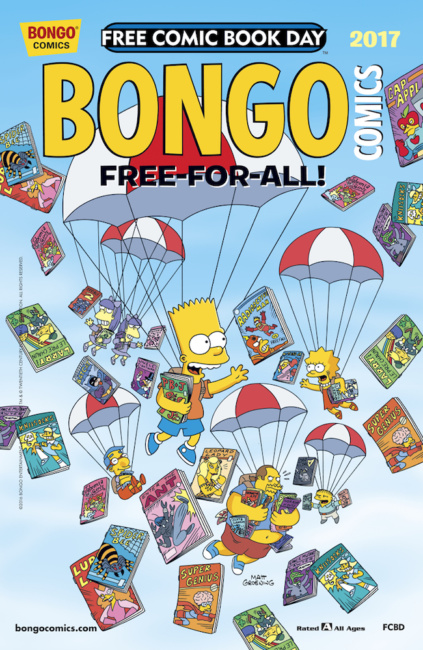 Some examples of what Free Comic Book Day has to offer. (Click to enlarge.) 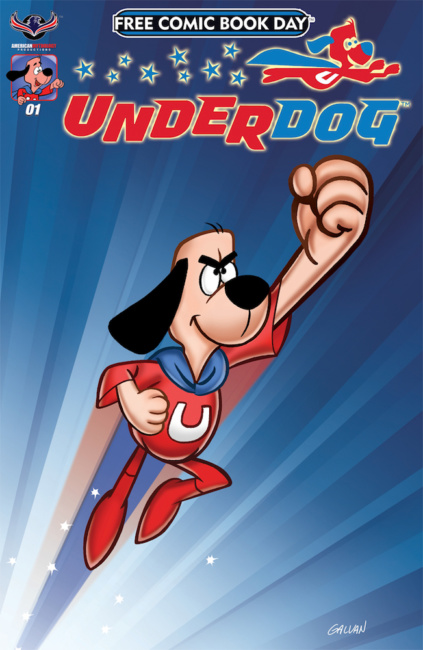 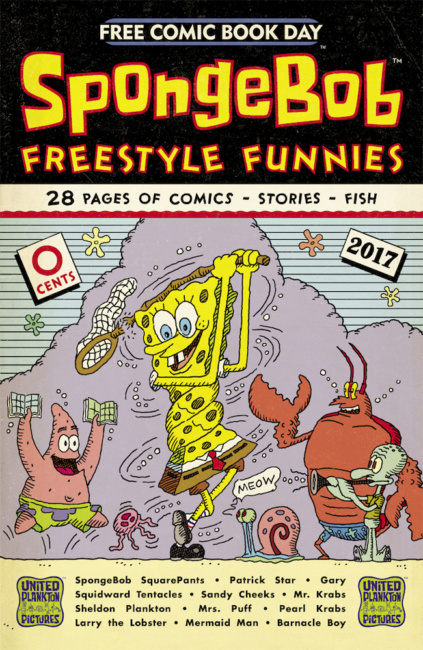 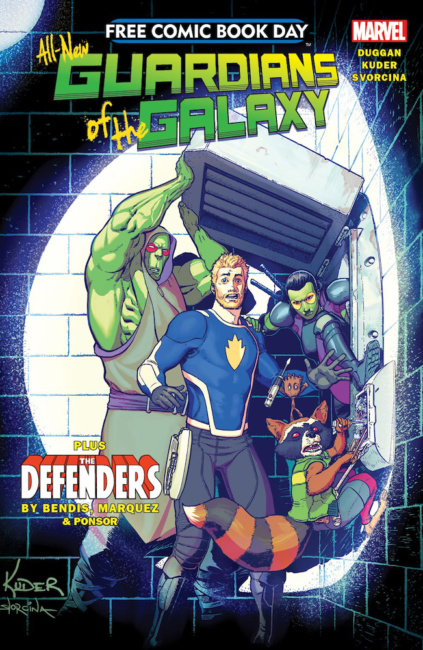 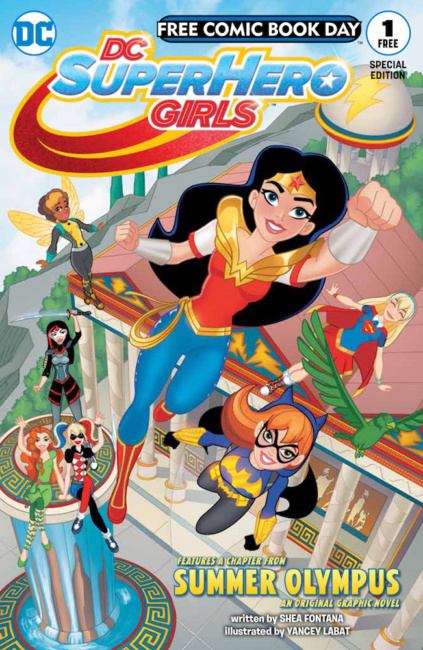 Syracuse-based comic-book writer has nothing but praise for Free Comic Book Day: “It’s a busy day at the stores, and a great day for parents to bring their kids and let them see what the whole thing is about. And there’s always somebody in the store who is discovering comics for the first time and they’re excited about it. It’s always great to be around that.”