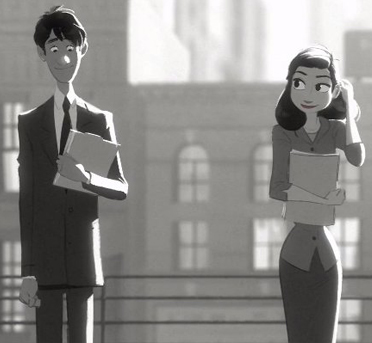 Romantic love is an obsession.

Love, as we all know it – let’s be honest for a quick second, and let’s acknowledge that we’ll never fully understand the concept – is a wonderful thing. We’ve read about Romeo falling for Juliet, Florentino and Fermina (Love in the Time of Cholera) acknowledge this at a young age and Anderson told us the tragic tale of a mermaid falling in love with a human – a tale that was tweaked to please all of us Disney adorers out there. In films: Lloyd Dobler taught us the importance of being true to and to even laugh at yourself, The Notebook showed us love can last beyond death and (500) Days of Summer reminded us that we can fall in and lose love a few times over … because we’re human.

Even Tony “Scarface” Montana falls in love with Elvira when he first sees her.

Guys, now is your attention focused?

However, all of these people mentioned above are characters. It’s fiction, and fiction – aside our own daydreams – is the best way to illustrate a concept. But could all of this delusion be confused with sexual attraction? There is definitely that gray area which Elliot Cohen, Ph.D. explores in his What Would Aristotle Do? article. Cohen states that “some people believe there can be a mystical experience of unity that accompanies the mere sight of the beloved for the first time.” That overwhelming sensation of attraction can drive that first interaction. And Cohen also mentions the interaction can be cognitive in regard to what the person says, how they are dressed, the way a person stands and their physical features; and this can include the cologne/perfume, sense of humor, habits and quirks of nervous laughter, scrunching of the nose, and maybe scratching an ear as they break eye contact. Of course, tone of voice, pheromones, and a first kiss cannot be ruled out.

And this is where and why listening and paying attention reveals a critical importance. Cohen references Bertrand Russell’s “knowledge by acquaintance,” meaning and emphasizing how “we are directly acquainted with others in certain ways before we come to love them.” This may come back from people we have dated, taken an interest in and shied away from, or those we’ve seen on television or in film.

Many sources say that you have a person pegged in the first three minutes of meeting them. And this is poorly touched upon by a Match.com article by Dr. Helen Fisher: Love at First Sight, Explained. Aside from the thoughts of Dr. Fisher, there really is no reference to other conclusive evidence in the article to support her thoughts. However, she does write:

“Romantic love is an obsession. It can happen in a moment, but when it strikes you can’t get your new beloved off your mind. And this instant passion can last — sometime for many years.”

Sure, it’s best to be optimistic about it. This spark of adoration should parallel the Big Bang, an explosion so large (and contained) to keep burning for the rest of our lives. However, this sudden love can be a powder keg, and the small and powerful explosion can ultimately blow up in our face. As comforting as feeling love may be, it can be essentially dangerous. We can fall in love to the point where it can consume our lives and minds. Our minds drift, and our work ethic – and/or personal ethic – can take a turn for the worse. It has been seen throughout our histories that we can be driven mad, which can result in horrific – possibly deadly – consequences. There are also those people, who get wrapped up in fictional characters on screen, in books, or online to the point of not making sense.

Yet, its best not to dwell on the negativity. Love is supposed to be a immense and beautiful thing, and it’s supposed to be painful at times – you know you’re alive with experiencing that pain; you should accept and embrace it, for the better and for the worse, but you do not have to go overboard.

The honest truth is that we’re all looking for an attractive life partner. We’re all shallow enough to flock toward the pretty faces before we flock to the soul, because we can’t see the soul … at first. This is what separates one person from another: if someone can’t get a pretty face, then they will move to the next or might give up; others will keep going, lighten up, and dig deeper the next time around. According to the Huffington post, Vivian Diller, Ph.D., explains the results of a survey about the hot topic. She talks about the longevity of life and the rising percentage of divorces, and it comes back around to taking care of oneself in the physical sense; and it’s certain that hygiene, although it is not mentioned, plays a part in this.

Diller’s Is ‘Love Really Blind’ isn’t going to be picked apart completely, but she does make some very strong points. This includes: “Couples are told to avoid Gottman’s Four Horsemen – criticism, contempt, defensiveness and stonewalling – the major destructive forces that have been found to destroy relationships.”

And shouldn’t it be obvious that we should be taking care of ourselves simply for our own, personal sake?

And what about lust? With the articles referenced in this piece, it’s blatantly obvious that men fall for women more easily than the other way around. Men are stimulated visually and women are not. These notions are further proof that women are the most beautiful of the genders and that men essentially walk around with a duh expression on our faces more often than we think. Sure, we can sit with our friends and point out the person we would or would not sleep with. We don’t need the full first three minutes to determine, judging by physical appearance, if we humans would sleep with the person we are interacting with.

It’s appreciating those first three minutes to really understand the person you are talking to. However, some people – getting their kicks and enjoyment of the first split-second rush of attraction – live by that at-first-glance standard. In another article by Dr. Fisher, at Oprah.com – The Realities of Love at First Sight – she states, “Indeed, it takes less than one second to decide whether you find someone physically attractive.” Sure, the sex could be great, but this is all that would drive the relationship. And it’s obvious that sex sometimes becomes infrequent with the continuation of a relationship; that could annoy a lot of people. Personally, it’s fake love; and these temporary go-get-hers ruin it for the rest of us guys wanting to commit. They have the confidence to talk themselves up.

Yet, it’s about understanding the need to be patient. Relationships are supposed to keep burning and grow over time, we’re supposed to grow and acknowledge our partner’s growth and this keeps the momentum going. It’s the rubber band expression in terms of growing: it’s gets more difficult to stretch with longer pulls, but it’s best not to rush and break it. Giving up is an option, but it isn’t the best one until the relationship has been fully wrung and dried up. Relationships should not be one-sided as well. Nothing is perfect, and there will be rough roads that are encountered in the very beginning, and sometimes a couple tire changes are what is needed before the paved roads are finally found. However, tire changes are inevitable no matter what section of the partnership you’re facing.

“They say when you meet the love of your life, time stops, and that’s true.
What they don’t tell you is that when it starts again, it moves extra fast to catch up.”

There aren’t any clues or definitive certainty if we are meant to be with one certain someone, or if there are several close runners up. There is personal belief that there may not be a certain someone, but there are multiple potential partners that will fill the shoes. It’s because no one is perfect. This does not mean that it’s OK to be a heartless cheater. Just because there might be many people to meet the standards of a partner, it does not mean you are allowed to go out and constantly search. When you meet a person, you will meet them, and you’ll know – and it’s supposedly in those first three minutes.

However, it’s also about giving yourself a swift kick. You can stand in a crowd of people all you want; the gathering will dissipate, and no one is going to wait up for you – aside a few friends or family, but they’ll be in the cars already – as you wait there by your lonesome. You’ll leave empty handed, consoled by a few hugs and pats on the back that are iced with words of encouragement. There will be a next time, and you’ll have that confidence by then – not just the confidence with simply being able to talk to another.

How is this true? Well, as you drive off or being driven off, you’re probably going to lock eyes with another member of the Lonely Hearts Club as they wallow in another car. And they’ll smile at you. You’ll reciprocate the grin, and maybe you’ll both laugh about it. As you both head in opposite directions, you’ll both be thinking about that task of finding each other again.