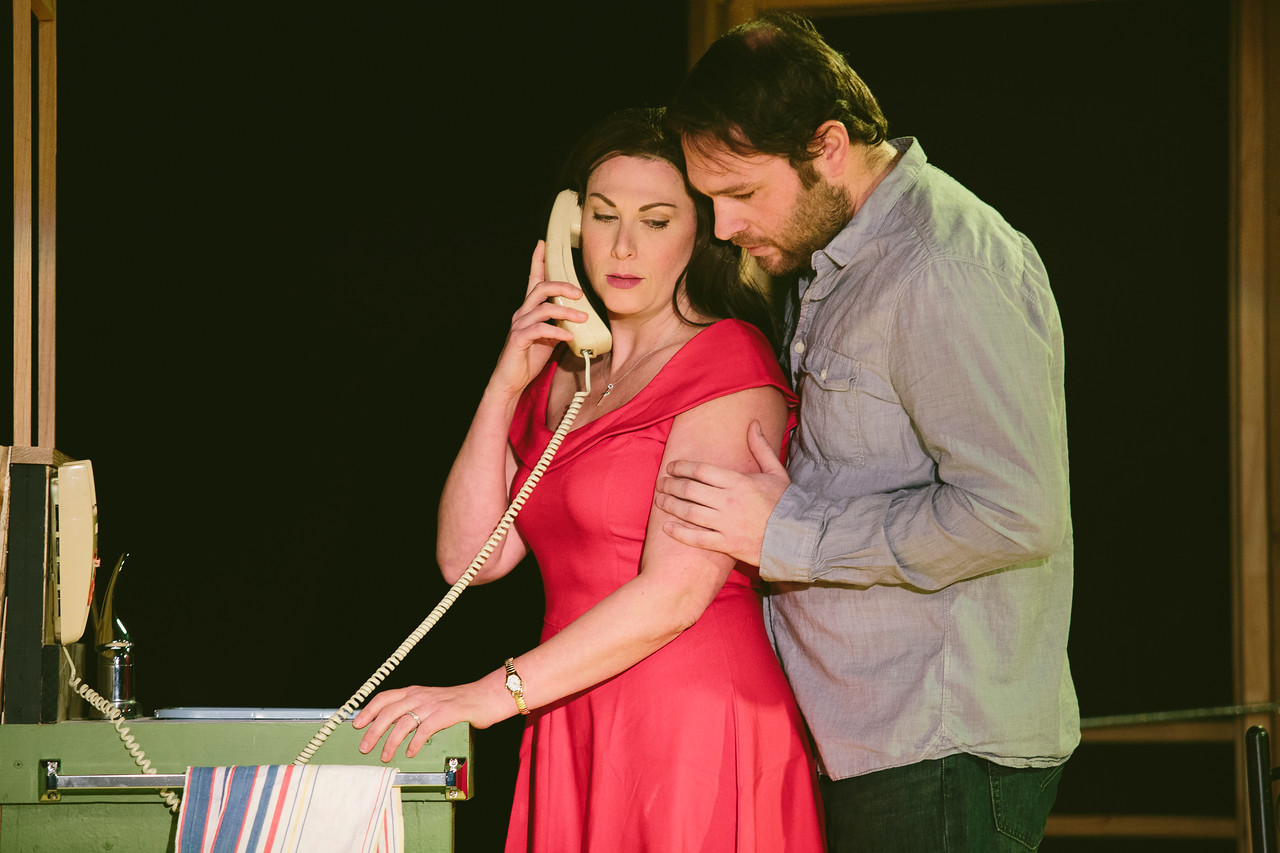 Earlier in this decade Central New York Playhouse’s predecessor, Not Another Theater Company, was establishing a network of performers as well as a critical reputation at the Locker Room on Hiawatha Boulevard. That venue could never attract the kinds of crowds that now come to the playhouse’s Shoppingtown Mall venue. For a second time artistic director Dustin Czarny is reviving a hit show from the earlier company, this time with two of the previous leads, Jordan Glaski and Katie Deferio, in the same roles.

Aaron Sorkin’s A Few Good Men, running through Saturday, March 24, is not only the greatest courtroom drama of the last generation, but also one of the most significant stage works to have been workshopped in Syracuse. Most audiences begin the show already knowing the climax, which in no way diminishes the excitement of getting there. Sorkin, who made his reputation with Good Men, fills the stage with 22 characters of contrasting personalities, ranging from the Prussian Cpl. Dawson (Christopher James Lupia), the more aggressive of the accused, to the chatty, cordial prosecutor Jack Ross (Eric Feldstein). The playwright is not an anti-military liberal.

Tensions grow steadily along two tracks. One is the maturation of the seemingly feckless Lieutenant Kaffee (Glaski), and the second is the detective story: Were the murderers the enlisted men, or are they taking the blame for orders issued elsewhere? A key moment resolves both matters when Kaffee wonders aloud why someone with such a low rank and poor record has been assigned to the case. Deeper self-perception prompts resolve.

Sparks fly up in one of the most explosive scenes of any production this year when Kaffee confronts the most responsible officer, Col. Jessep (Josh Mele), with hard-won evidence. Jessep gains from Mele’s articulate tenor, as the character had previously seemed so reasonable. This is when Glaski, Mele and director Czarny all deliver crashing jolts of electricity.

The fervent fans of Jane Austen’s novels have made the many film and TV adaptations into hits, even when the original properties have been treated roughly. Stage adaptations have been rare, presumably under the apprehension that her novels have too many characters to follow running through too many scene changes.

Enter young American Kate Hamill, who knows what needs to be done with Sense and Sensibility, running through Saturday, March 24, as the Boot and Buskin Theatre Club’s season finale at Le Moyne College. Hamill favors minimalism at a giddy pace, casting with doubling and tripling up of characters. We see such an approach often in spoofs like Jeffrey Hatcher’s Baskervilles, but Hamill is faithful to the novel. Her Sense and Sensibility contains more minor characters and plot twists than does Emma Thompson’s Academy Award-winning screenplay for the 1995 movie.

The “sense” and “sensibility” of the title refers to the Dashwood sisters, tall, cool-headed Elinor (Morgan Smith) and impetuous, flirtatious Marianne (Kit Kuebler). Along with their mother (Mattea McDonald) and coltish younger sister Margaret (Kelsey Rich), they are left scrambling after having been cut out of an inheritance at the death of their father. We don’t always see the good prospects coming. A tall, blue-eyed Edward Ferrars (Andrew Kedik) looks promising, but social disapproval splits them apart. Edward is sometimes confused with his no-goodnik younger brother Robert. In a puckish fulfillment of playwright Hamill’s vision, director Leslie Noble has also cast Andrew Kedik as Robert.

Director Noble, also one of the best-known mimes in the area, shares so much of Hamill’s wit and invention that it’s hard to know where the script ends and the local variation begins. All cast members except the two Dashwood sisters also turn up as busybody gossips, listening behind the curtain to what is being said. In a snap, they morph into a pack of braying hounds or a team of caparisoned horses. Together with the hand of choreographer Larry Crabtree, the cast can quickly ascend from expressive movement to dance. The cast is filled with star performances, especially Noelle Killius as an insinuating vulgarian; Samantha Overton as a garrulous, well-meaning neighbor; and Tyler Sternberg as the suitor who improves with a second look.

The Bridges of Madison County

R.J. Waller’s 1992 romance novel The Bridges of Madison County sold a zillion copies and director-star Clint Eastwood’s 1995 movie version was a surprise hit, but Jason Robert Brown’s musical adaptation, with book by Marsha Norman, is the one that nearly got away. Despite Brown’s critical esteem (Parade, The Last Five Years), Bridges ran a measly three months in spring 2014.

Director Tina Lee, who guides the Appleseed Productions’ mounting running through Saturday, March 24, admits to being attracted to the music only when she heard it on Sirius radio, where it has been a programmer’s favorite. Music director Abel Searor, with seven players employing lush strings, delivers a plangent score that is disarmingly elegant for rural Iowa.

Whereas the book and film follow the viewpoint of photographer Robert Kincaid (Jason Bean), the musical focuses on the vaguely discontented Italian war bride Francesca Johnson (Aubry Ludington Panek), now a farm wife. The set features her porch, kitchen and bedroom, with everything else, including the bridges, wheeled in on casters. Heart-rending middle-age adultery might be the core of the drama, but there are 12 players in the cast, including comic neighbor Marge (Michaela Oney), whose jazzy “Get Closer” heats up the action, and a folksy fiddler (Leila Dean) at the state fair.

Musically, Bridges does not resemble any other show of the last 20 years. Along with jazz and folk, there are passages of country, pop and even opera. Francesca is Italian, and Panek has an authoritative accent. Some of the folk-themed numbers evoke Joni Mitchell, not a musical idiom often heard on stage.

The short Broadway run featured major star Kelli O’Hara, perhaps a bit young for the role. Ludington Panek, an admired presence on the local scene and a frequent Syracuse New Times Syracuse Area Live Theater (SALT) nominee and winner, feels more like adroit casting. This might be her best outing ever. Audiences who miss her big second-act number, “Almost Real,” will gnash their teeth in anguish.