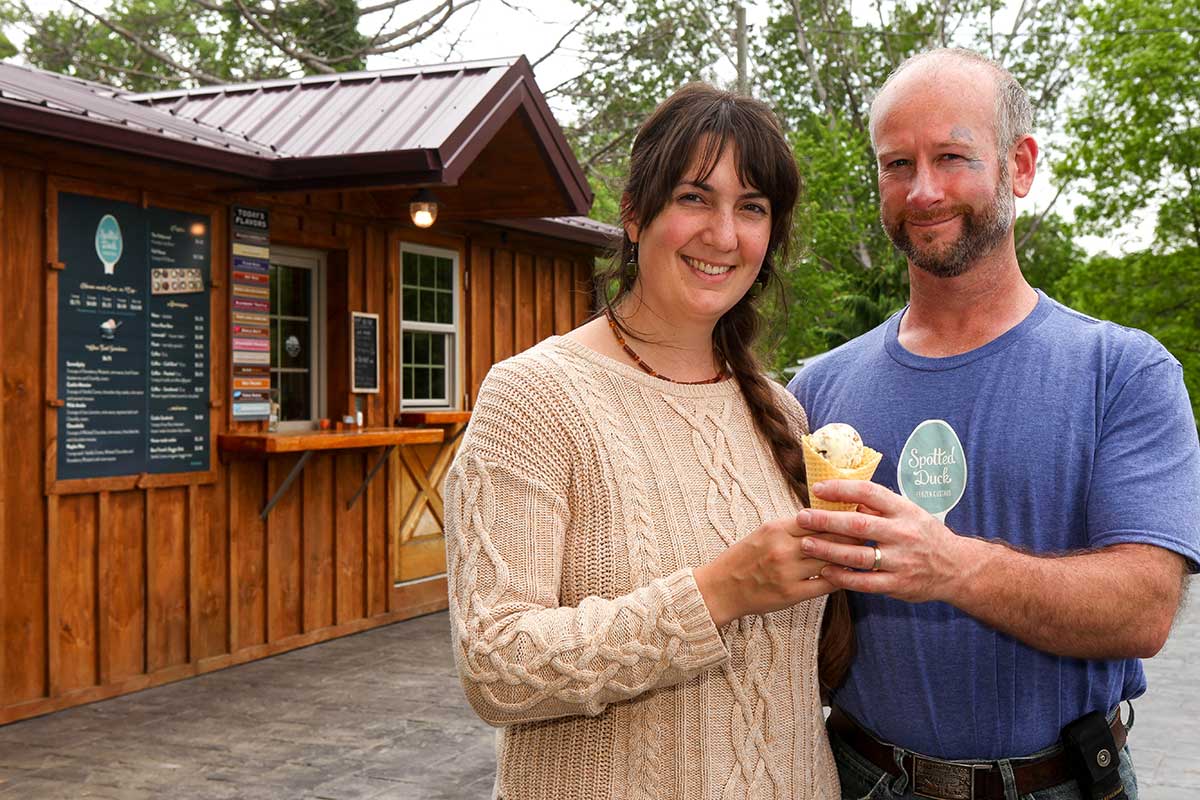 How far would you drive for some exceptional ice cream? Twenty-five miles? Fifty miles? A hundred miles? Really good ice cream is worth going the distance. And The Spotted Duck, near Penn Yan, is home to some truly tasty, one-of-akind ice cream.

The Spotted Duck has been drawing customers from around the country (and the world) since it opened in 2016. Co-owners Elizabeth and Daniel Hoover use milk, cream, sugar and duck eggs — no emulsifiers, stabilizers or artificial ingredients — to make a rotating selection of velvety ice cream (technically frozen custard), sold from the small stand that doubles as their production kitchen. The duck eggs come from a flock of more than 200 Ancona (spotted) ducks raised on site.

On warm summer weekends, the place is crawling with guests, including visitors to the wineries on Seneca and Keuka lakes, folks exploring the Keuka Outlet Trail and Preservation Area, day-trippers and locals.

“Take a break from the wine flights that give you a hangover and taste their flights of homemade custard,” says one reviewer on Yelp! “Fantastic! Your taste buds will thank you.”

Just as appealing is the authentic farm-to-(picnic) table experience. Enjoy your hyper-local frozen custard, then visit with the ducks and feed them some “sprinkles” (grains).

“People really connect with farm-to-cone atmosphere,” Elizabeth Hoover says. “They love to interact with the ducks. Ducks are so fun. They never stop moving.” It took a while for the Hoovers to home in on duck egg frozen custard and ducks as the focus of their destination farmstead. They both grew up on organic farms and for a few years they owned and operated a natural foods store in Penn Yan’s business district. A family member suggested they start making their own ice cream — something that Daniel had learned from his father. They bought a churn and started experimenting with flavors, often selling out. They had a farm near Branchport for a time, where they continued experimenting, selling their ice cream at markets, fairs and festivals.

What’s the difference between ice cream and frozen custard? Ice cream is the general term used to describe frozen desserts made with milk, cream and sugar. Frozen custard contains egg yolks, which give it its ultra-creamy texture.

Initially, the Hoovers used chicken eggs in their base — that is until Elizabeth read up on duck eggs, which are prized by chefs and pastry chefs because they contain more fat and protein than chicken eggs. The quality of their custard turned a corner, she says, when they made the switch to duck eggs.

And their business gained a stronger foothold when they changed locations. Their farm and ice cream stand is on Route 54, a short distance off Route 14, a main thoroughfare for people traveling the west side of Seneca Lake and cutting over to Penn Yan and Keuka Lake.

Partnering with local growers and producers is important to the Hoovers. Ingredients like rhubarb, strawberries, raspberries and blueberries are organic or from farms that grow in an organic manner. They grow some of their own fruit, including berries, cherries and apricots.

Flavors come on and off the menu as the seasons roll along, with 12 to 14 flavors usually available at a given time. Some flavors are always available, including Vanilla Creme, Wicked Chocolate, Sea Salt Caramel (made with their own caramel and salt from Seneca Salt Company) and Real Cookies and Cream, studded with chunks of cookies they make themselves.

The Hoovers make just about everything themselves: buttery-crisp waffle cones that Elizabeth describes as “more like pizzelles,” chocolate chip cookies for ice cream sandwiches, even their own vanilla extract. They make some frozen custards infused with local wines, and the oatmeal stout for their Super Stout custard comes from Garrett’s Brewing Company, in Trumansburg.

Feeling adventurous? Try the Lavender Bleu frozen custard, made with lavender and local blueberries. Or Hot Mud, dark chocolate custard with chunks of chocolate and a hint of jalapeno. Or Black Button Brunch, vanilla custard with bits of bacon, infused with bourbon cream from Rochester’s Black Button Distilling. Can’t decide what to order? Try a flight of four flavors or a “full house” — one scoop each of 12 flavors. Sundaes are topped with wine syrups and sauces from Arbor Hill Winery, on the south end of Canandaigua Lake. Flights are served in small mason jars on wooden boards and sundaes are served in dishes, with real spoons.

The Hoovers live on site with their four young children. Daniel makes the frozen custard, using an old-fashioned churn retrofitted with an engine. He can make up to five gallons of frozen custard at a time. Elizabeth handles marketing, promotions and social media. Together, they work on the development of new flavors.

Ducks, chickens and peacocks roam the fenced-in pasture and the property is dotted with picnic tables. They’re in the process of adding more parking to accommodate traffic and have been inviting food trucks with a focus on local food and sourcing to join them on the farm on Tuesdays and Saturdays this summer.

“That way people can come for dinner and dessert,” Elizabeth Hoover says. Check the Spotted Duck Facebook page for details.