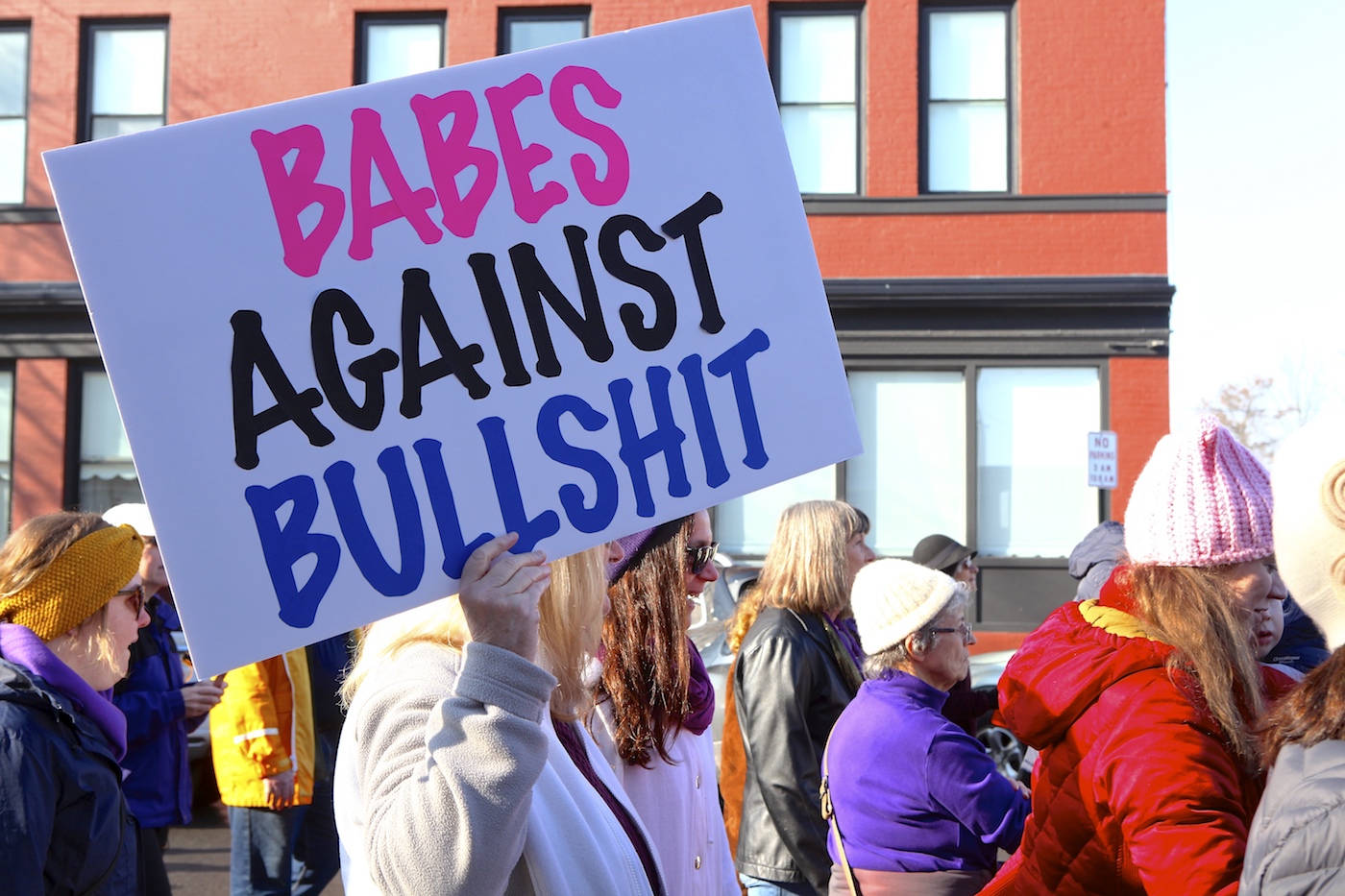 Thousands gather to express their views during the Women’s March in Seneca Falls.

“I wanted to pass on to my daughter the importance of acting on your beliefs,” Dorr said. “If we don’t stand up for our First Amendment rights and human rights, we may lose them.”

She traveled to the birthplace of the American women’s rights movement to honor and draw strength from the brave women of that era. “Oppressive factors are trying to exclude parts of our society and oppress our rights,” she said. Protesters of all ages made their voices heard at the Seneca Falls women’s march. Michael Davis photo | Syracuse New Times

Her daughter was also energized by the location and the crowd. “I’m the next generation that’s going to have to stick up for our rights or they’re going to slip away,” she said.

Mother and daughter were among an estimated 8,000 people at the event, according to the National Park Service. Organizers put the estimate at more than 10,000 people in the village of about 9,000 people, far exceeding the anticipated 2,000 participants. An hour ahead of the 10 a.m. start time, Thruway traffic was backed up at least a mile.

Rev. Leah Ntuala awaited the march’s start with her husband, Simon, and their 7- and 3-year old sons. Ntuala is pastor of First Presbyterian Church of Seneca Falls. It was at that church, the site of the afternoon rally, that Alice Paul in 1923 proposed the Equal Rights Amendment.

“We’re here to keep letting people know of our presence and that we’re called to do justice,” said Ntuala, whose husband is from Kenya. “We intend to be witnesses and to be voices.”

People have so many fears about policies under the Trump administration that “it’s hard to know where to start,” she said. “Choose what’s on your heart that day.”

The day’s formal events began with about 90 minutes of speeches before the five-block march to First Presbyterian Church. There, people filled the 19th-century Victorian church for poetry, song and speeches. A large, upbeat crowd watched the program outside on a screen.

Syracuse Mayor Stephanie Miner drew loud cheers and applause for her talk, which directly linked the day’s events to the 1848 convention, an idea she called “audacious.” She recounted how Stanton and dozens of other women and men supporting women’s suffrage arrived at the chapel, only to realize no one had the key. Stanton’s nephew crawled through a window and opened the door for the conventioneers.

“That’s a good message to all of us about how we will have to be resourceful to let our voices be heard in the halls of government and other places they will not let us in,” Miner said. “We will not be locked out.” “…governments are instituted, deriving their just powers from the consent of the governed,” Miner quoted from the 1848 document. “That is us,” she said. “In order for the government to work, they need our consent.”

Miner also made a gentle jab at labeling as “snowflakes” people who have criticized Trump and his promised policies. “As the mayor of Syracuse, I’m proud to be a snowflake,” she said. “Snow, when you pack it all together, it’s very strong.”

Throughout the day, spontaneous chants broke out, with groups yelling, “This is what democracy looks like” and “Love trumps hate.” No counter-protests took place, although a house about a block from the Wesleyan Chapel was decorated with two large Trump banners.

The crowd was diverse in age and ethnicity, but it was overwhelmingly white. That paralleled the march in Washington and elsewhere, pointing to the decades-old debate about the place of people of color in the women’s movement. Creative signs were not at a premium at the march. Michael Davis photo | Syracuse New Times

And as in Washington and other places, many marchers wore pussy hats: a not-so-subtle reference to Trump’s comments about grabbing women’s genitals. People were also decked out in colors affiliated with suffrage: white, gold and purple.

Many more were punny and clever. A sampling: “Make Racists Afraid Again,” “Girls Just Gotta Have Fundamental Rights,” “Words Matter” and “Not My Tweeter.” Other notable signs: “Keep Your Tiny Hands Off Our Rights,” “Keep Your Paws Off My Silky Drawers” and “If You Cut Off My Reproductive Freedom Can I Cut Off Yours?”

Ely Margolis and his husband, Dai Newman, of Syracuse, said they attended to support women. “We feel vulnerable, but we’re concerned about other people,” Margolis said. “Women’s rights are most likely the first to be eroded,” Newman added.

Lynn and Chris Bevin of Dannsville (Livingston County) wore 1914-era clothing, watching the march. “The fight for women’s suffrage was going on in 1914,” Lynn Bevin said. “When war was declared, women were very upset their cause got sidetracked. It feels like this is another chapter in that fight.”

Sally Roesch Wagner, director of the Matilda Joslyn Gage Foundation, quoted Gage, a 19th-century suffragist, abolitionist and writer who lived in Fayetteville: “Oh, rebellious woman, to you the world looks in hope. Upon you has fallen the glorious task of bringing liberty to the earth and all the inhabitants thereof.”

Gage “would rejoice in our gathering today,” Wagner said before the march. “The fox is now in charge of the chicken coop. But we have come too far on the road to freedom to turn back.”

She encouraged the crowd to continue “the terrifying and transformational challenge of turning the country back on the path toward freedom.” It won’t be easy, she said. “We need to remember two things: One is that we are gonna get our asses kicked. And the other is that we are gonna win.”