One of the most perplexing of all the UFO shapes is the Changing UFOs category. For a few years now I’ve heard many UFO enthusiasts complain that the Changing category is useless since it really doesn’t define anything, or that the observers are flawed in some way. I must admit that the previous reports of Changing or Morphing UFOs left me with the impression that these were flawed observations.

Then I listened to the radio talk show Coast to Coast AM, as investigative journalist George Knapp was interviewing Jacques Vallee, one of the deans of Ufology. Vallée made a point about Changing UFOs that seem to morph in an effort to confound observers, their cameras and other scientific equipment that the researchers might be using.

A strong case has been made that many UFOs seem to be under intelligent control vs. some random natural phenomena like ball lighting. Another idea is that these unidentified craft might be “living ships with Artificial Intelligence (AI) Consciousness.” The idea is that these living ships detect the thoughts of people on the ground trying to observe them.

I decided to see what the statistical numbers indicate. First, let me preface two important points: 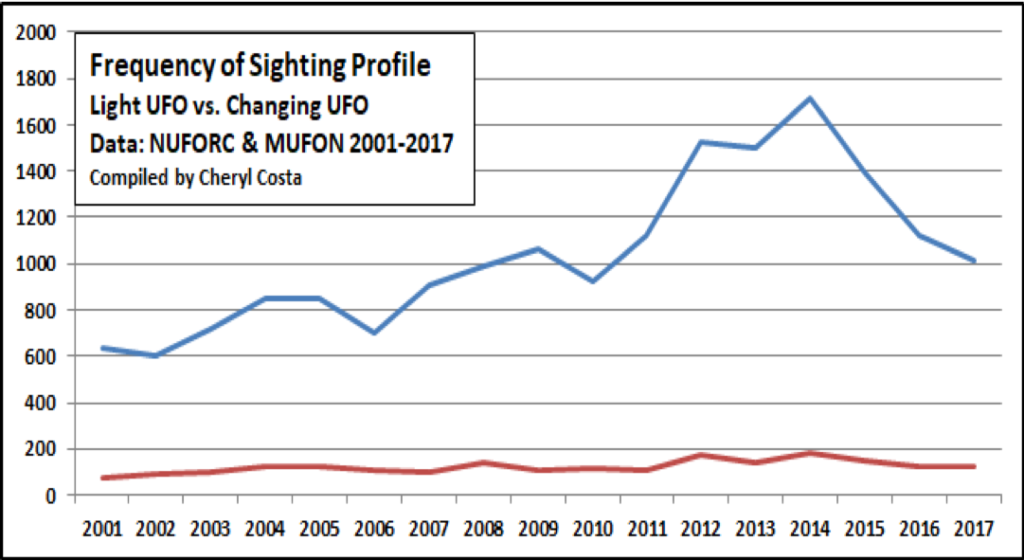 Here’s some intriguing data on the “Frequency of Sighting Profile.” For comparison, I selected the most common UFO shape reported: a simple “light” in the sky. The blue line sighting profile from 2001 to 2017 is roughly consistent with most other UFO shapes. There was a slight rise from 2001 through 2007. There is a spike in 2008, which was caused by a documentary about UFOs that was on the Discovery Channel. MUFON was featured in that Discovery show as a national UFO reporting service and thereafter the MUFON data loosely tracked year to year similar to NUFOC. In 2011 through 2015 there is a sharp rise and fall and in 2016 and 2017 have fallen off sharply.

Now look at the red line which represents the Changing UFOs. Note that that the Light shape has sharply changing and huge sighting numbers between the high hundreds through the tens of thousands. The Changing UFO has numbers more or less in the dirt by comparison; with an even string of reports totaling less than 2,100 sighting reports over 17 years.

If we examine the Changing UFO with a finer resolution we can see that it also has a rolling cyclic nature; with an average of about 123 sighting reports per year.

I was surprised where these Changing UFO reports were coming from. California, as you might expect, had 340. Yet it was the next four states that were telling, with a range from 130 to 103: Florida, 130; Washington, 104; Arizona, 103; and Texas, 103. I expected to see a steeper drop in those sighting numbers. Thereafter, the sighting numbers for the Changing UFO dropped very gradually across the various states, which is a very atypical sighting pattern.

I took a peek at U.S. counties for this Changing UFO. Since the overall national sighting numbers for the Changing UFO were barely 2,100, I didn’t expect every county in the country to have a sighting. Using a Forensic Cluster process that I’ve developed I discovered the following with regard to Changing UFO reports.

I would never have dreamed that from such tiny sighting numbers that such an interesting mystery would reveal itself.