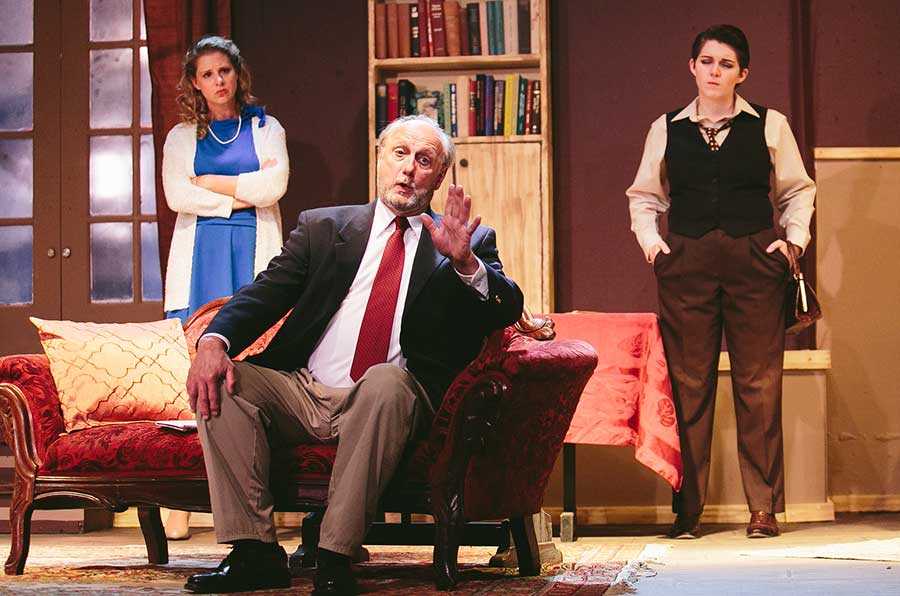 There’ll be none of that “Shh-shh, don’t tell” business. Under Dan Stevens’ direction, the cast of Agatha Christie’s The Mousetrap (through Sept. 22 at Central New York Playhouse) dispenses with the post-curtain admonition that we not give away the identity of the culprit in the still-startling twist ending.

As the drama opened in London nearly 66 years ago and has run through more than 25,000 performances, nearly everybody knows whodunit going in. No matter. Knowing who the killer is in director Alfred Hitchcock’s Psycho does not stop people from watching it again. There are so many other things to amuse us along the way.

Dame Agatha was nearing 62 and at the height of her powers when The Mousetrap opened in 1952. Her gift for plotting had long since proven adaptable for the stage, as she knew from Ten Little Indians, originally a novel. In The Mousetrap she abbreviates the number of suspects to a more manageable five (or maybe seven). And she becomes more of an actor’s friend, giving performers more strutting to do than was required of characters lifted off the page. Most Christie characters are suspicious, probably hiding something, but in The Mousetrap several characters are nearly walking vaudeville acts, just in the exposition.

The setting is Monkswell Manor, a guesthouse in Berkshire (pronounced “BARK-shur”), newly open for business. The wife and husband team of Mollie (Jennie Russo) and Giles Ralston (Jack Carr) are running the place themselves. With post-war austerity still in place, they suffer from rationing and there’s not enough money to hire extra help. That also means no maids or butlers to eavesdrop, tightening the action. Because of heavy snow, the roads have become impassable and somehow (wait for it), the telephone line is down.

In a teasing opening scene, a vintage Bakelite radio announces that a woman in London has been murdered and a man seen fleeing from the scene is dressed a bit like, ahem, Giles. The husband and wife are initially seen as bland as possible, but we learn that they have been married only a year, with some questions about what they might have been doing before that. Director Stevens has prudently cast two players beyond the bloom of youth in these roles. Jennie Russo, in many ways the center of the action, skillfully plays Mollie as a person capable of holding secrets.

Then the guests arrive, including the sourpuss reactionary Mrs. Boyle (Nora O’Dea), whose non-stop kvetching mentions dry rot, the labor shortage, the weekly rent (a steal at 70 guineas), and the lack of responsibility among the lower social orders. O’Dea, the director’s wife, has graciously taken on this rebarbative harpy, and their rehearsals at home must have been fun. Retired Major Metcalf (Keith Arlington) comes with better manners, but his shifty eyes do quite a bit of talking.

Two younger characters are more ambiguous: the hyper-neurotic Christopher Wren (Strange David Fuller) and the severe, mannish Miss Casewell (Alyssa Otoski-Keim). Three years after Obergefell vs. Hodges we immediately identify the two as gay, for which one could be jailed in 1952 Britain. The script gives Christopher more to do, and actor Fuller makes him a fey peacock of flamboyant neuroses.

Alyssa Otoski-Keim, seen last year as the scantily clad adulteress Vicki in Noises Off, has more fun with Miss Casewell than have previous community theater actresses. She has something of the audacious androgyny of Marlene Dietrich in trousers, enjoying putting on the straights.

Blessedly the script bumps off vexatious Mrs. Boyle before the first act’s curtain, which brings in forthright, self-confident Sergeant Trotter (Stephen Shepherd) to launch the second. He never pretends to having superior insight like Hercule Poirot, but in a methodical way he provides important missing exposition. The aforementioned London murder is linked to the one in the first act, and the killer could well be looking for a third victim in Monkswell Manor this very night.

The most experienced member of the cast, Simon Moody, presents a different Mr. Paravacini than has been seen in a dozen earlier productions. Paravacini is the stranger who arrives at the guesthouse claiming his car overturned in the snow.

Picking up on the Italian name, other actors have made him florid and operatic. Moody (also in charge of costumes) makes him tweedy and wry, delighting in holding some unspoken secret. Although Christie’s lines do not assign him any bon mots, Moody’s eyes depict him looking as though he’s just about to say something wonderfully funny.