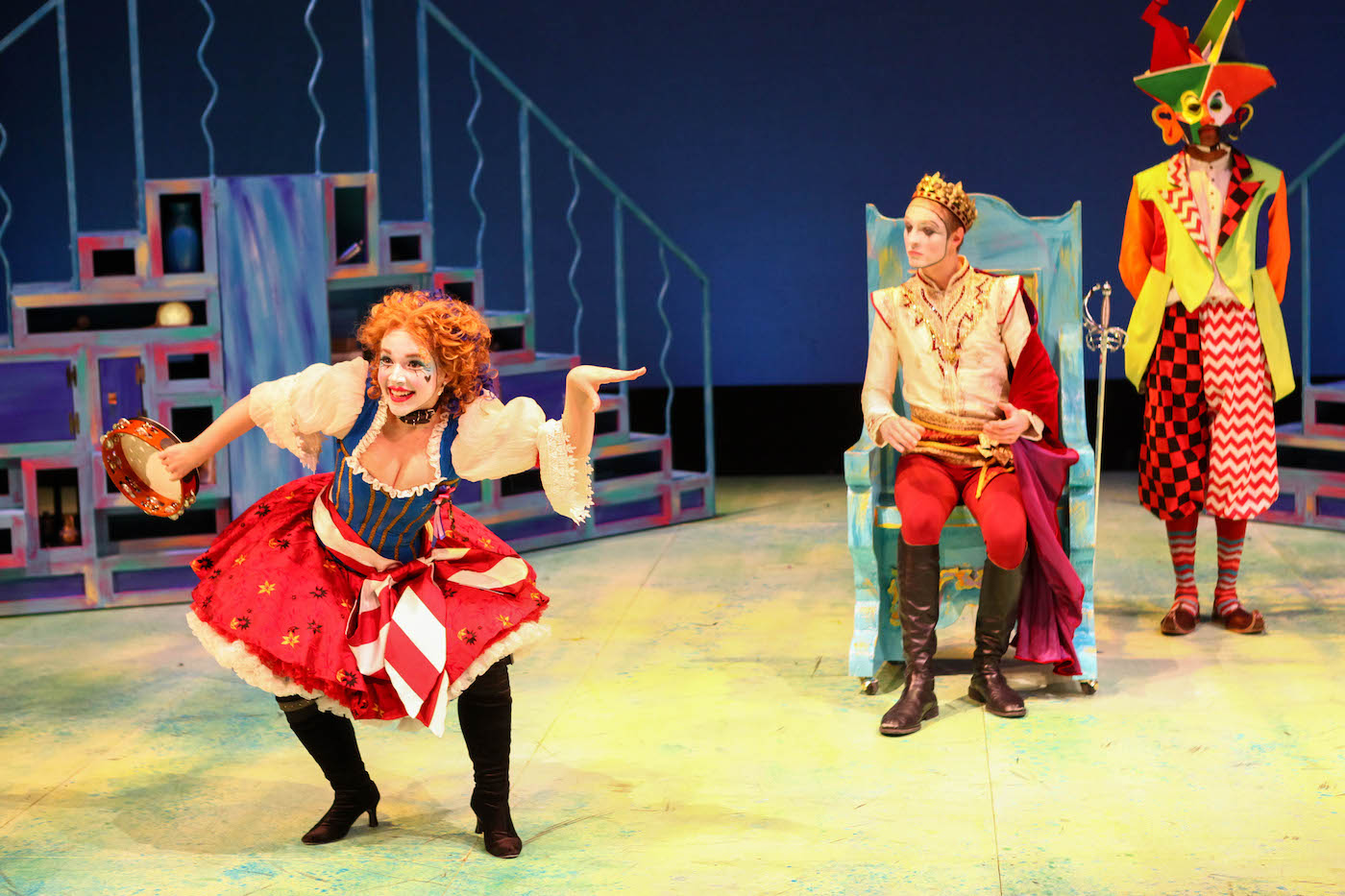 The exuberant, often eye-popping production of The King Stag (premiered 1762) at the Syracuse University Drama Department, running through Sunday, Feb. 26, is likely to be the first work by Venetian playwright Carlo Gozzi most audiences have ever seen.

Director Felix Ivanov describes it as a “fairy tale for adults, not for kids.” Featured are stylized half-masks designed by Olga Ivanov, tightly choreographed movement, and a general ambiance of artifice. Not a thread is naturalistic. Yet there’s an undercurrent of familiarity, like the musician wearing the steampunk boots. Both Gozzi and previous productions of King Stag have been so influential, we have been seeing their effects all along.

Although not a familiar enough name to merit being a Jeopardy! question, Carlo Gozzi (1720-1806) is a titan of theater history. He was a champion of the 200-year-old tradition of commedia del’arte just as it was losing favor to the realistic comedies of Carlo Goldoni, Gozzi’s rival and enemy. His aesthetics influenced operatic theater in his own time and inspired works by Giacomo Puccini and Sergei Prokofiev in the 20th century.

A landmark 1984 revival of The King Stag by famed director Andrei Serban featured costumes, masks and puppetry by a youthful Julie Taymor, which anticipated her work in The Lion King (1997). The paradox in Gozzi, however, is that while commedia fostered improvisation, his plays, including The King Stag, are tightly scripted. Each character comes with plenty of shtick, as if the improv had been built in.

Action takes place in the kingdom of Serendip and in the nearby forest of Roncislappe. Although the two acts focus on tall, blond Prince Deramo (John Aric Cleland) and related characters, they feel like two separate plays connected by the slender cord of vengeance.

All players introduce themselves at the curtain’s rise, and a helpful narrator, the magician Cigolotti (Suheli Ray), sets up the action, with four musicians (Jordan Berger, Madelyn Geltch, Emily Harkins and Emily Vielbig) at stage right to underscore movement and tone. The percussionist, for example, whacks an actual slapstick when fists meet chins.

Handsome but lonely, Deramo seeks young ladies willing to audition to be his bride. Ambitious patrons push their favorites. First Minister Tartaglia (Mario Marques) has to tear his reluctant daughter Clarissa (Sarah Hubner) away from her true love Leander (Crawford Horton) to make a faltering play for the Prince’s approval. The ambitious striver Brighella (Allisha Edwards) hustles up his cousin Smeraldina (Kara Cooper), who is smitten with the buffoonish bird-catcher Truffaldino (Emily Bollman). Smeraldina makes her futile play by turning a somersault before the Prince. Finally, the elderly, barely mobile Pantaloon (Sarah Herrman) invites his ballerina daughter Angela (Adriana Schaps) to go up — almost — en pointe to make the family case. It works. And the furious Tartaglia vows revenge.

Such a summary leaves out all the fun. Each character acts simply by entering and moving with flourish. Sarah Herrman’s Pantaloon, for example, tilts back at a gravity-defying angle and progresses in arthritic baby steps. Mario Marques’ black-clad Tartaglia, who proves to be the ultimate villain, looks like a demon in some obscure mystery cult and walks with the menace of a street thug. Costume designer Isabel Rubio delivers all the necessaries, and the student actors ignite them with magic.

The second act moves the action to the forest, when the entire court goes hunting and we are introduced to the title character. Vile Tartaglia knows a magical verbal prescription that will transfer the soul of the Prince into the body of a slain stag, and his own into Prince Deramo’s. We had caught sight of the King Stag (Markcus Blair) earlier, but in his royal transformation he appears to take flight on stage. Blair, whose head is crowned with antlers, is a trained dancer with the body of an Olympic athlete.

The Prince, with Tartaglio’s spirit inside, now behaves like the evil twin. More transformations follow, including Truffaldino’s parrot bursting into bosomy magician Durandarte (Jenna Najjar), and the Prince’s spirit inhabiting the body of an aged man (Brennan Miller).

The 255-year-old King Stag is no musty museum piece. Under Felix Ivanov’s life-infusing direction, it bursts with inventiveness, energy and comedy.