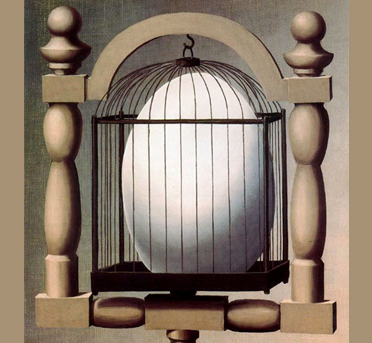 “One night I woke up in a room in which a cage with a bird sleeping in it had been placed. A magnificent error caused me to see an egg in the cage instead of the vanished bird. I then grasped a new and astonishing poetic secret, for the shock which I experienced had been provoked precisely by the affinity of two objects — the cage and the egg – to each other, whereas previously this shock had been caused by my bringing together two object that were unrelated.”

– Rene Magritte on his Elective Affinities (1933)

[Note: This will be viewed from a third person perspective. The scene could fit inside of a shoe box, but it is not a diorama.]

“I looked all over the place for you. Heavens, you gave me quite a scare.” The man second-guessed his entering the room with haste, grabbing onto the ends of the threshold to gain his balance as the floor seemed unsettled and the room to be rocking. Nausea crawled up his esophagus slowly and gingerly like spider legs.

“Well, come in and quickly sit down before you turn this world upside down with unnecessary panic,” the seated man assured his friend and quite jokingly. The den was filled with antiquities including: vases, books, a piano, and the focus of two love seats. There was a certain mustiness that could not be pinpointed, where it emanated from, and he obviously scrunched his nose at the slightest inhalation of the odor. However, it’d eventually get used to that invisible cloud after a few takes, and regardless of how it triggered tears to make the inner corners of his eyes feel pulpy with each blink. His attention quickly focused over to the piano in the far nook. His companion sat on the right side of the farther of the two love seats, which paralleled each other with a table in between them. He sat with a book in his right hand, which donned a ring that glistened valiantly in the light, and NARRATIVE was the only word that stood out to Guest as it was decorated with large letters. A cane rested to the left of him, and upon it rested a bulbous hat.

“I am. It’s just waiting for you to take a seat that’s holding us up.” He smiled with an air of satisfaction. His neck tensing from the facial movements made the donned ascot shift as if coaxed by a gust of wind.

Guest’s trousers shuffled as he ventured over to sit upon the opposite seat. His carried hat, itching to be worn, rested snugly into the bend of his waist; it was placed to the left of him on the love seat — save his sitting on the right hand side. The chain from his right side pocket watch clicked with each reflected glare. As he settled, his host’s motions displayed peculiarity. A bowl of green apples sat in the center. He noticed that the ringed counterpart continued to smile at his presence; his eyes motioned over to the bowl of fruit, and his head nodded. “It’s eerily quiet in here,” the guest said as he nervously fidgeted for his pocket watch’s presence. “Do you normally sit in silence?”

“It’s for composure. It’s perfect for conversation and otherwise. We can hear each other just fine. Listen, just stop talking.” Host slid his spectacles in place.

At opposite sides of the table and buffered by a napkin, tea rested in cups upon saucers, and a small biscotti sat next to each cup — save placement on opposite sides. The ringed gentleman nodded at the butler in the bowler; he closed the French doors.

The clock upon the mantle struck at the one o’clock hour. The room seemed to jerk, and the floor wavered beneath their feet. “It’s all right,” Host reassured; his cane slowly slid down against the seat, but he caught it before it hit the floor.

Guest set his saucer down upon the table in front of him, and he looked at his watch, then the window, and then at the watch. Reaching for his beverage again, while he leaning over, he noticed the perfect shine of the coffee table; however, within its flawless face he could not see his own face. His eyes narrowed.

From the cage that wasn’t noticed, a cockatiel flew to the Guest’s cup and perched upon its lip. The man quickly grasped the handle of the china while the bird pecked its face into the remaining half of the biscotti before flying off with it and back to its cage to join a second.

“No,” the host said. “They don’t run, they fly. For what it’s worth, would you like to be stuck in a cage to simply be watched? Or is it you, you who wants to watch?”

Guest looked back at the closed French doors, back at Host, and then at the windows; beyond the white opaque curtains, night waited. He reached for his pocket out of nervousness, but hesitantly stopped himself. For a split second he noticed that as his right hand opened his coat, the host’s right hand moved to his lap; as the left hand reached in for the pocket, the host’s same arm and hand fanned out.

“Don’t rely on such an object.”

“It is. But it does no good keeping tabs on it. It doesn’t. You watch it more than it watches. It’s simply a time keeper, an inanimate object named after a verb. Watch, it does no such thing.”

“This concern … It is the afternoon. Why is outside as dark as night?”

“It’s not night,” Host confirmed. “It’s just the illusion of the windows. And in a few moments, as the sun hits appropriately, you’ll see that it’s daylight again. It’s cyclical; you should know that by now. You ask too many questions with answers you already know.” The sides of his face pulsated. “Soon you’ll be asking me whether if there are as many stars as there are rocks.” “This was a waste of time.”

The room jolted enough to shift the furniture. The birds took refuge inside the cage.

“So be it. I’m staying right here. I’ll be anticipating your catching up.” A tooth-hidden sneer slugged across his face. Guest reciprocated one back. “Just watch your step as you leave, young man. And it’s always raining.”

He was there much longer than he thought or anticipated. The French doors opened to fanfare, a carnival decorated with lights of a combined effort to make the evening light up as if it were day.

Labor Day or No, It’s Still Summertime
#takeatour of the New York State Fair
To Top