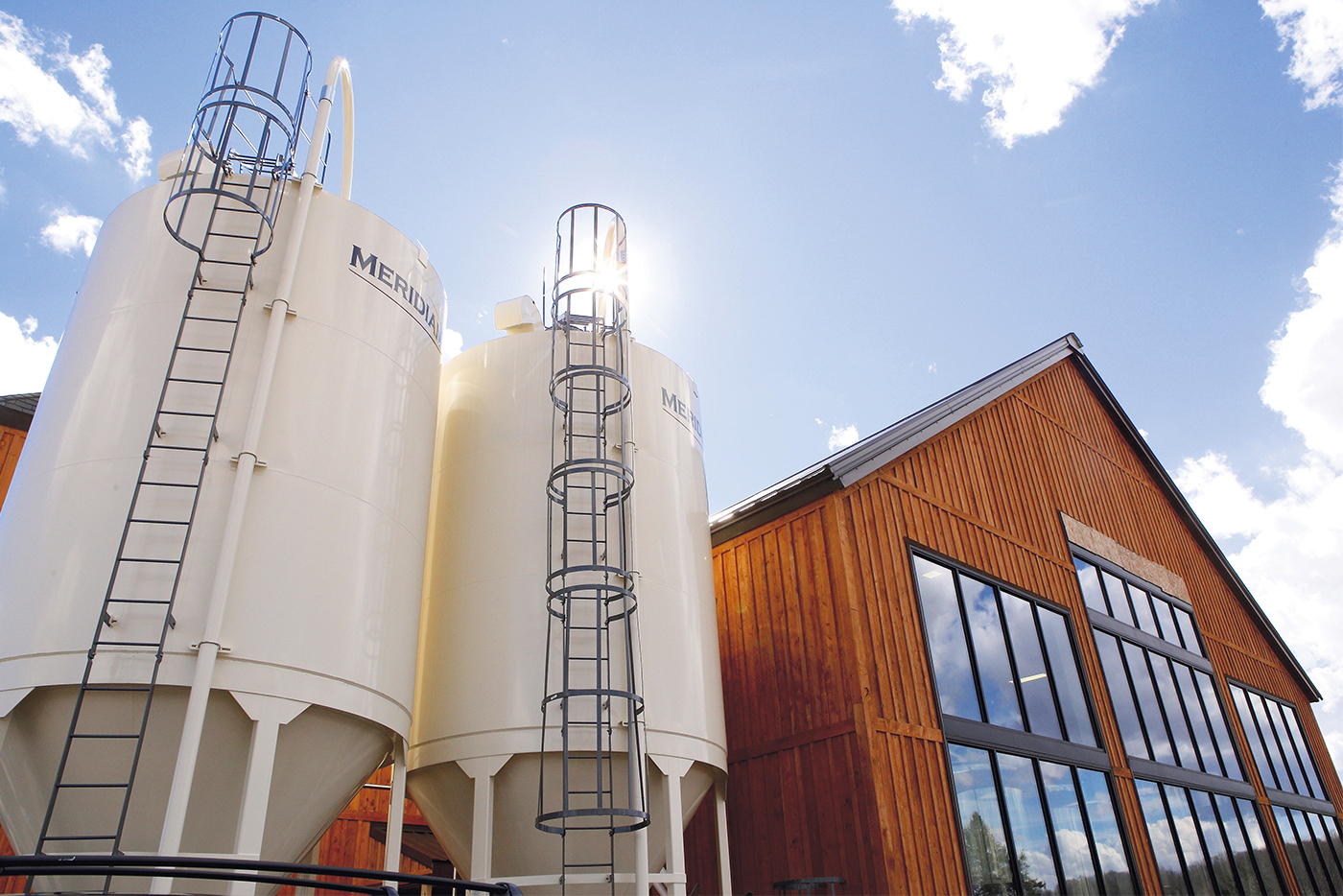 The Empire Strikes Back

Cazenovia’s Empire Farmstead Brewery gets ready to roll out the barrels.

Turn off Route 20 onto Route 13 south in Cazenovia and, just past the Lorenzo State Historic Site, you see it rising: a large structure with a trio of turrets in the style of the Madison County hops barns of yesteryear. It’s the long-awaited Empire Farmstead Brewery, and it won’t be long now before you can stop in for a tasting — or pick up a six-pack in your favorite store.

Slated to open next month, the 42,000-square-foot countryside spin-off of downtown Syracuse’s popular Empire Brewing Company will feature “beer gardens” for growing some of its own hops, barley, rye, wheat and other ingredients, a shiny new brewhouse and bottling line, an aging cellar, a large tasting room and “farmeteria” restaurant, a suite of corporate offices and a gym for employees.

When the new brewery is up and running, Empire will transition from a seven-barrel microbrewery to one of the largest craft breweries in New York state, able to produce 60 barrels of beer at a time and 30,000 barrels a year (with capacity to grow). A barrel equals 31 gallons of beer, so do the math: That’s a LOT of beer. “I believe with all the breweries out there, the only way for us to compete is with an elite brewery,” says Empire founder David Katleski, who also serves as president of the New York State Brewers Association. “It will really set us apart. What we’re doing here is we’re trying to create an experience, an experience where you see, smell, feel and taste how beer is grown and made.”

For Katleski, who lives in Cazenovia with his family, the last year has been a whirlwind of bringing the Farmstead Brewery off the drawing board’s blueprints and to fruition. The delivery of the brewhouse equipment on a bitter cold day in January made it real. Brewing is scheduled to begin April 11 and bottles should be in stores by May 1.

Asked if he could envision such an expansive state-of-the-art beer production facility when he opened the downtown brewery in 1994, Katleski replies: “I couldn’t even envision it when I saw it on paper. It’s starting to make sense now. We’re really excited.”

Katleski isn’t the only one who’s excited.

Tim Butler, director of brewing operations, has spent the winter getting to know the new equipment and running tests in preparation for brewing. The early focus of Butler and his team will be five signature beers for distribution: Slo Mo’ IPA, East Coast Amber Ale, White Aphro Wit Ale, Black Magic Stout and Skinny Atlas Kolsch.

“It’s certainly a lot different than the brewpub. Everything is a lot bigger here, but I’m not scared or nervous or anything,” Butler said last week. “The brewing process is the brewing process. I’m looking forward to ramping it up.”

Ben Reilley, owner (with his wife, Shioban) of Life of Reilley Distilling and Wine Co., also in Cazenovia, believes the opening of the Empire Farmstead Brewery will have a major impact on the Cazenovia/Madison County beverage community, which includes breweries, a winery and several craft spirits makers.

Reilley launched Life of Reilley in 2013 and produces three kinds of vodka at a facility east of the village. His business is undergoing expansion and he’s looking forward to the day when he can welcome visitors to a tasting room.

“We’re doing back flips over here,” Reilley says of the Farmstead Brewery. “Just think about how many people they’re going to bring to town. People from all over the world are going to come to this place. And those people are going to say, ‘I’m here. Now what else am I going to do?'” The Empire Farmstead Brewery is scheduled to open to the public on Memorial Day weekend. Until that time, here are some details to know about it.

1. A Unique Brewhouse. The brewhouse at the Farmstead Brewery is fully automated and the first of its kind, anywhere. The brand-new, mirror-finish grain mills, tanks and fermentation vessels are designed by Syracuse’s Feldmeier Equipment Inc. The company has been making stainless steel processing equipment for more than 60 years, but this is its first foray into making equipment for the brewing industry. “They gave us exactly what we wanted,’’ Katleski says. Boilers and other equipment in the brewhouse were made by Fulton Boiler Works, of Pulaski.

2. Sixty Bottles of Beer Per Minute. All of the beer made at Empire Brewing Company downtown goes into kegs. At Farmstead, 65 percent of the beer brewed will be bottled for local, regional, national (and hopefully international) distribution and 35 percent will be kegged, according to Katleski. Canned beer will debut in the future. A key part of the new brewhouse is a centrifuge, which clarifies beer by centrifugal force, and a bottling line commissioned from Prospero Equipment, of Pleasantville. “We’ll be able to hum along at 60 bottles of beer a minute,’’ Katleski says.

3. A Farm Brewery with Local Relationships. The Empire Farmstead Brewery is categorized as a “farm brewery” under a 2013 state law that provides incentives for using New York state ingredients. The Farmstead Brewery will dedicate 12 of its 22 acres to “beer gardens’’ planted with ingredients used to make beers: hops, barley, rye, wheat, herbs, fruits and vegetables. The brewery will source hops from Clark Hollow Hops, The Bineyard, Foothill Hops Farm and Pedersen Farms, among others. 4. Eat Where You Live at the Farmeteria. Empire’s downtown brewpub is known for reasonably priced food with a local focus. Expect more of the same at the Farmstead Brewery, with a twist. “Everyone is asking, ‘What kind of food are you going to have?” Katleski says. He came up with the name “Farmeteria’’ to describe his vision: an open, European-style beer hall tasting room with tables for two and four, long community tables and multiple windows for ordering food, with table delivery.

The menu will feature soups, salads, sandwiches, local cheeses and house-made sausages and charcuterie. The tasting room and restaurant area will seat 100 and open to a 60-by-30-foot seasonal patio with more seating. A smoker outside will allow the kitchen staff to smoke meats. The spacious French-style kitchen will have a pizza oven for flatbread pies, windows that look out to the dining area and windows that overlook the countryside.

Some produce will be grown on site. Katleski also expects the kitchen to work with about 40 local growers and producers, including Greyrock Farm, a year-round CSA (community-supported agriculture) that supplies the Thai basil used in Empire’s Golden Dragon beer. Most of the beef used in the restaurant will come from nearby Meadows Farm.

The tasting room and Farmeteria will be open year-round, Thursdays to Sundays, 11:30 a.m. to 9 p.m. “We’re really a production brewery first,” Katleski says.

5. Work Where You Live. The Empire Farmstead Brewery will employ about 70 people in a variety of positions: agriculture, administration, brewing, packaging, retail, sales, marketing, design, events on site and restaurant. The second floor of the facility includes corporate office space and a gym for employees, with locker rooms and showers.

6. Green Acres. Meadows Farm has supplied Wagyu beef for Empire Brewing Company for years, and Empire has been supplying the farm with its spent brewing grain to feed the livestock. When the Farmstead Brewery opens, the spent grain and the beef will only have to travel a short distance: just across the road. Meadows Farm plans to increase its herd to meet Empire’s growing restaurant needs, Katleski notes.

The Empire Farmstead Brewery tasting room, gift shop and restaurant will strive to maintain a carbon footprint of 30 miles or less.

7. Paying Homage to Salt City’s Beer History. Syracuse was once home to dozens of breweries. One of the longest-running of them was Haberle Brewing Company, located on Butternut Street, which closed in 1962 and was reduced to a pile of bricks. The patio outside the tasting room and Farmeteria will be lined with 30,000 restored bricks from Haberle. Director of operations Nick Irvine acquired the bricks thanks to Craigslist and Rocci DeCaro, of Syracuse.

8. Take a Hike, Ride a Bike. Katleski, a big fan of bicycling, plans to have bike racks for visitors who arrive by bike and employees who bike to work. He encourages people to hike and bike the Burlingame Trails, accessible from the Farmstead Brewery property and from the Lorenzo State Historic Site. The recreation trails are moderately hilly and offer gorgeous views of Cazenovia Lake and the village.

9. The Downtown Syracuse Brewpub Isn’t Going Away. The Armory Square destination at 120 Walton St. will become the incubator or pilot program for Empire’s new and more experimental beers. And the restaurant will remain open.

View more photos of the construction of the Empire Farmstead Brewery here.

The Copper Turret Restaurant, Morrisville. The Route 20 venue is opening a brewpub in conjunction with the SUNY Morrisville Brewing Institute. Construction on the brewery will begin this summer, with select drafts available at that time and a grand opening in the fall, according to head brewer Micheal Coons. 684-6699, copper turret.com.

Critz Farms Brewing & Cider Co., Cazenovia. The pick-your-own agritourism destination (and tasting room) re-branded its beverage side last year and recently introduced craft beer in addition to its hard cider made from apples grown on the farm. 662-3355, critzfarms.com.

Foothill Hops Farm, Home Brew Shop and Brewery, Munnsville. Foothill is dedicated to preserving and promoting the hop-growing heritage of Madison County. It has been supplying hops to home brewers and small breweries (including Empire) for years. Owners Kate and Larry Fisher plan to open a farm brewery this summer. 495-2451, foothillhops.com.

Good Nature Brewing, Hamilton. This microbrewery, launched in 2012, is undergoing a major expansion and relocation this year that will take it from 1,000 barrels a year to about 4,000 barrels. The new brewery will be located south of the Colgate University campus in Hamilton and will have a tasting room. The current tasting room at 8 Broad St., in the village, will remain open. 824-2337, goodnaturebrewing.com.

Humble Harvest Brewing: Humble Harvest is an artisanal nanobrewery located east of Cazenovia on Route 20, at Nelson Corners. A tasting room, now under construction, is slated to open this spring. 404-5686, facebook.com/humbleharvestbrewing.

Life of Reilley Distilling and Wine Co., Nelson. The family-owned small-batch distillery offers three premium vodkas — original, vanilla and raspberry — made from New York state corn, plus the soon-to-be released Disco Lemonade, an “on-demand” vodka and lemonade cocktail in a can. 506-5084, lifeofreilley.net.

Old Home Distillers, Lebanon. Members of the Carvell family use locally grown ingredients to make their small-batch, hand-crafted spirits. The distillery is a renovated horse stable on a historic farm property. Specialties include moonshine-style whiskey, gin and Apple Jack. 837-4123, oldhomedistillers.com.

Owera Vineyards, Cazenovia. This 57-acre vineyard and farm winery is noted for its Rieslings, Chardonnay, Cabernet Franc and blends made from grapes grown across New York state, as well as estate wines like Frontenac Gris and Marquette made from cold-hardy varietals grown on-site. 815-4311, oweravineyards.com.