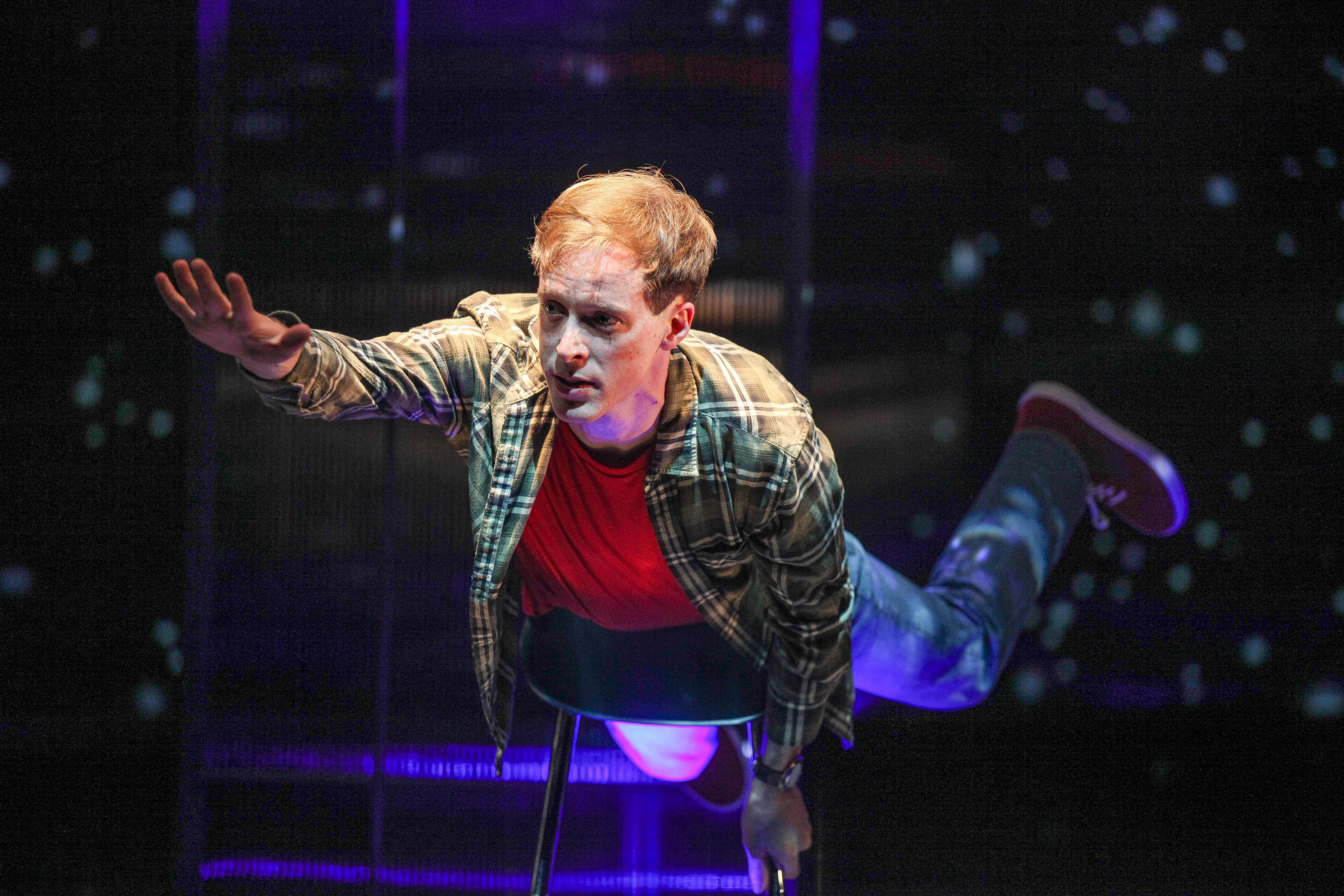 The Curious Incident of the Dog in the Night-Time. Although this play is intended to baffle as well as astonish and delight us, most of the audience will enter Syracuse Stage’s current production (running through Sunday, Nov. 12) with more than an inkling of what’s coming. That’s because Mark Haddon’s 2003 novel, on which it is based, has an almost cultish following, approaching what Catcher in the Rye once enjoyed.

Many will know that the central character is a teen named Christopher Boone, who is on the autism spectrum. He’s a math genius who does not want to be touched, can’t grasp metaphors and cannot tell a lie. His monologues are interior, and Haddon declared the book “unadaptable.”

Enter hot young playwright Simon Stephens, whose earlier hit Punk Rock was performed by the Syracuse University Drama Department in spring 2016. In order to allow Christopher to speak, Stephens has him write his inner thoughts in a notebook, and his mentor-teacher Siobhan (Elizabeth Ledo) will read his words for him, a play-within-the-play.

Those words were never meant to offer an analysis of Asperger’s syndrome, which novelist Haddon claims not to have studied. Instead they are a literary mechanism to depict an innocent mind confronting lies, contradiction and a choking flood of information. By putting this on stage, however, playwright Stephens visualizes more than novelist Haddon revealed.

The “curious incident” of the title is the murder by pitchfork of a neighbor’s dog in a nearby garden. Novelist Haddon and playwright Stephens expect that we will recognize the title as an allusion to the famous phrase from Arthur Conan Doyle’s “Silver Blaze,” in which Sherlock Holmes remarks on the dog in the night that should have barked but did not. Christopher is immediately suspected and fecklessly makes things worse for himself by bumping into, or “assaulting,” a policeman.

Curious Incident is no mere whodunit, however. Christopher has been living with his unsympathetic father Ed (Robert Neal), a boiler engineer, believing that his mother had died two years earlier. Yet sharp-eyed Christopher notices that letters from his mother are dated after her supposed death. A kindly neighbor, Mrs. Alexander (Margaret Daly), reveals some secrets about Christopher’s mother and another neighbor, Mr. Shears, who owned the dog. Christopher must now find how things got to this state and where his mother is.

The first act takes place in Swinden, an unremarkable town in Wiltshire, 75 miles west of London. The second act takes Christopher to the unfamiliar and threatening capital, with key action taking place in the crowded underground tube. Scenic designer Russell Metheny and the cast immediately adapt. A lady (Mehry Eslaminia) on a Swinden street morphs into a spike-haired Punk Girl in the subway.

Director Risa Brainin takes abundant risks in this superlative co-production with Indiana Repertory Theatre of Indianapolis. The boldest of these is casting slight, blond Mickey Rowe as Christopher. As explained in a four-page program note, Rowe is not only autistic himself but legally blind. His script came in 18-point type.

Even though Christopher’s speech is supposed to be hampered, Rowe speaks more lines than anyone in the cast, and more clearly than some with too-heavy British accents. Although he admits to the familiar autistic phobias (only certain kinds of T-shirts), Rowe is a highly physical performer who appears to have gymnastic as well as mime training. The back-flips look effortless.

Other attempts to have performers with disabilities they are supposed to portray have looked like wince-making charity. Not this time. Rowe’s personal autism disappears into his character’s.

Metheny’s high set enhances both the Haddon-Stephens text and Brainin’s interpretation. At the rear we see a tall, 25-panel glass screen, somewhat askew. Not only are the panels in irregular sizes but the whole thing tilts to an angle. Christopher’s perception? The prime numbers he is always citing (which appear irregularly in the published novel) show up randomly on different panels. Two panels, one above the other, rise silently to make a door. At other times the panels are projection screens.

During the action, space is often defined by six-foot-high semi-transparent panels on casters, which can be folded together to make a room. When Rowe as Christopher holds a freeze-frame dance leap against one of these, and it rolls across the stage, he is in flight.

Unusual for an adaptation of such an admired but unconventional novel, Stephens’ play has won even more plaudits than the original, cleaning up at the Oliviers in London and copping a Tony Award in New York City. The show maintains a separate artistic identity while remaining faithful to the novel. The London production just completed a five-year run last summer. Its opening here speaks well for the perspicacity and timeliness for the beginning of artistic director Robert Hupp’s era at Syracuse Stage. SNT