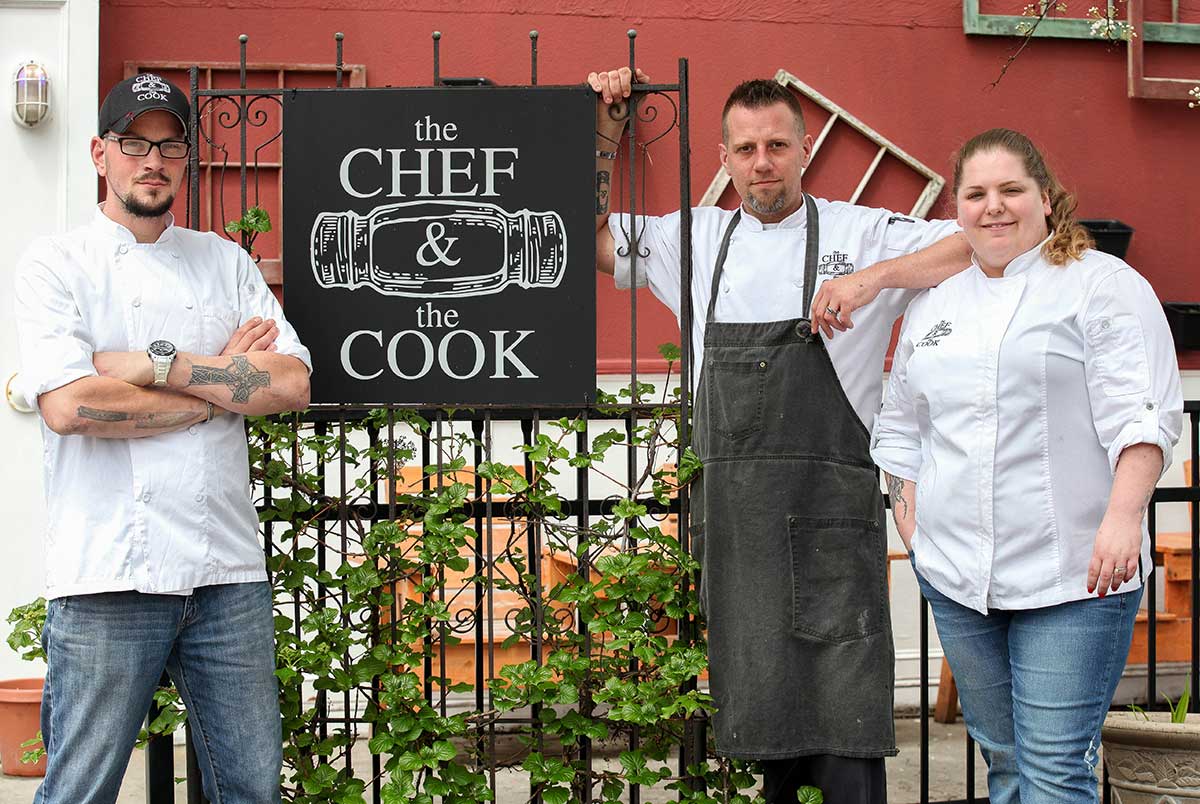 It is said that three’s a crowd, meaning that a third person offsets the ideal of a couple. It is also said that good things come in threes, and that is certainly the case at The Chef & the Cook, a restaurant in Baldwinsville owned and operated by three chefs. They’re young and ambitious, yet seasoned. You may have seen them make their TV premiere May 1 on the Food Network, with two other teams of three chef-owners.

There’s chef Jason Jessmore, whose career in restaurants has humble beginnings at the former Golden Corral in Fulton, where he grew up. His resume includes stints at L’Adour Restaurant Francais, Dolce Vita World Bistro, Mohegan Manor and more recently SKY Armory and Aster Pantry and Parlor in downtown Syracuse.

He’s joined by the husband-and-wife team of DeAnna Germano, founder of Chef4Rent, a catering business and personal chef service, and Mark Ross Germano, a chef who has earned his stripes in hotel and restaurant kitchens, including the Lincklaen House in Cazenovia. The Germanos met while working at Turning Stone Resort and Casino and got to know Jessmore when they worked with him at SKY Armory.

Last year, Jessmore approached the Germanos about an open space in the village of Baldwinsville and his ideas for a restaurant there. At the time, the Germanos were operating Cocaire, an Irish-themed restaurant at the Wayside Irish Pub in Elbridge. A partnership was born.

The Chef & the Cook opened in May 2018 with a two-faceted menu. The cook’s side of the menu features familiar foods with a gourmet twist, such as duck wings with spicy Korean Ssam sauce, macaroni and cheese (made with house-made cavatappi and smoked bleu cheese) and a lobster roll.

The chef’s offerings are more of a culinary adventure, with appetizers like foie gras, bone marrow and a tasting plate featuring carrots done three ways: roasted, pickled and pressed with chilis. Chef’s entrees include pork belly with two styles of black-eyed peas, a wonton dish with scallops and shrimp, and lamb ribs with fried butter beans and pickled cucumber.

Menus change about every six weeks and bread and pasta are made in-house. Rather than offer nightly specials, the chefs offer fresh catch and farmhouse beef specials that change each week.

It might sound very “fine dining,” but the partners want diners to feel relaxed. Their goal: “polished without being pretentious.” The setting is comfortable, with seating for about 36 people in a brick-lined room with a small bar. In nice weather, a patio has a chef’s garden and tables for dining al fresco.

In recent months, as guests have become more comfortable with the concept of The Chef & the Cook and the chefs behind it, they are ordering more often from the chef’s side of the menu, the partners say. Some will order the five-course tasting menu (offered with or without wine pairings) and a table of four to six or more might go “Into the Weeds” for a memorable dining experience that delivers one of everything on the menu ($375).

Under one roof and in one kitchen, the food styles and points of view of three different people come together. DeAnna continues to handle the Chef4Rent end of the business. Her passion is local and seasonal fare. On a recent morning, she headed out to forage for ramps at a favorite secret location and brought her young daughter along.

Mark Germano leans toward traditional, French-influenced cuisine with contemporary flair. His wife, who may be a wee bit biased, says he makes the best handmade pasta in Central New York.

Jessmore likes big, bold Asian flavors and combinations of cuisines that you don’t ordinarily expect together, like Thai and Italian. He describes his style as “global fusion.”

The trio is not afraid to take chances. Planning meetings for new menus begin with an examination of the current menu, what’s working and not working and what might carry over to the next menu. Piles of cookbooks are on hand for inspiration, while more ideas are listed on a chalkboard in the dining room.

Individual ideas are developed further as a group. The wonton item on the current chef’s menu, for example, started out as an idea for a tortellini dish.

The goal is to reach a consensus, but fighting for menu items is encouraged, too. Mark Germano says he lobbied for the carrot tasting on the current menu, and diners have enjoyed it. “I thought it was a cool idea,” he says, “whether it sold or didn’t sell.”

The morning after their Food Network appearance aired, DeAnna was up and out early with the Chef4Rent food trailer. They’ve added a larger truck this year so they can work two events on the same day, if needed.

Good things definitely come in threes, she says. Working as a team of three allows them to do more and also allows for some work-life balance. When she’s offsite, Jessmore and Mark Germano manage the restaurant. If the Germanos need a night off, Jessmore has them covered. And vice versa.

“At the end of the day, we do whatever it takes, for our business and for each other,” DeAnna says.