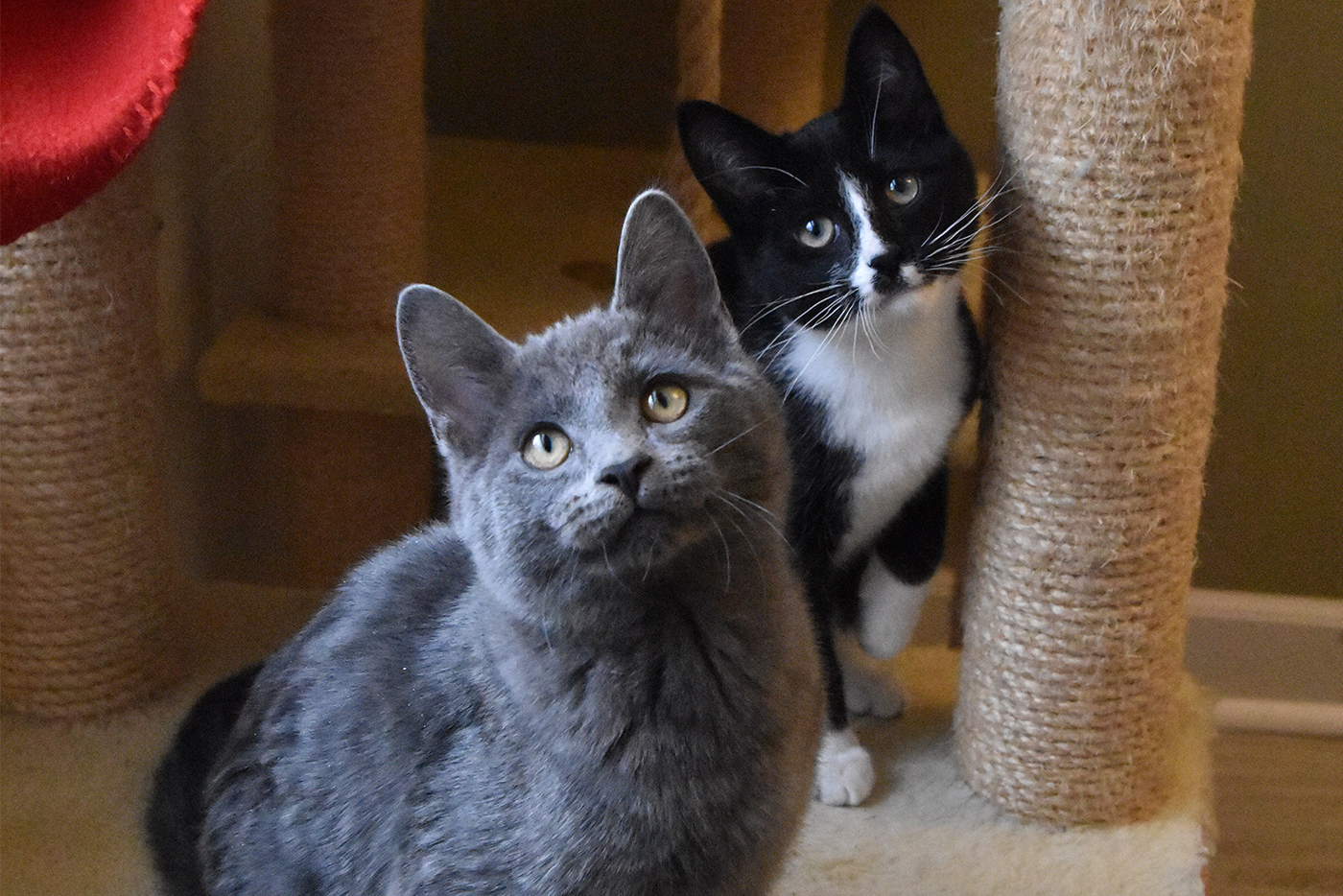 The sun sets outside the window of the little room off of Courtney Armbruster’s finished basement. The door closes behind her as she looks around for Smokey and Boots, the two kittens she is currently fostering. A pitter-patter of paws came from the scratching post in the corner of the room. The two kittens are a ball of tangled legs and tails as they try to reach Armbruster on the rug. She gathers the kittens, who are flailing with excitement, and smiles down at them. “We do this so cats and kittens, like these two, will find a great home and a great future.”

Armbruster is the president of the board of directors of CNY Cat Coalition, a volunteer-based business founded in 2002 that relies on the donations of people who love and support animals. Cat Coalition’s largest expenditure is subsidizing low-cost spay and neuter surgeries for low-income individuals. Cat Coalition works to prevent unwanted kitten births from happening, whether it’s house or feral cats.

“Veterinary care is very expensive,” Armbruster said. “Sometimes people call us about their own cats, but other times it’s just people trying to help out their neighborhood and take in cats off the street that were abandoned by their previous owners. They can’t afford to get five or six cats spayed or neutered that are not even theirs to being with.” CNY Cat Coalition utilize two low-cost spay and neuter clinics. One is Spay And Neuter Syracuse, 2616 Erie Blvd. E., and the other is Spay Neuter Assistance Program, which is based in Cortland. The vets at SNAP are a part of a program called Shelter Outreach Services, founded by Dr. Leslie D. Appel of Cornell Veterinary School. They are a traveling band of vets and vet techs that go to a different stationary location every week.

SANS is $105 to fix a cat and this price includes the needed vaccines. SNAP is $85 for the same procedure. “We normally ask people if they can pay. Some people can, but most cannot,” Armbruster said. “We ask them how much money they can put down, whether it’s $10 or $50. The wait is normally a month or more, so we ask if they can put away some money a week. We really try to maximize their copay because the more they pay the more money we will have for other cats in need.”

Armbruster almost always has cats to foster. She doesn’t go seeking them. People will contact Cat Coalition through email or Facebook mainly because they have found a stray cat near their house.

Boots’ and Smokey’s mother was a young cat when she got pregnant. She was a house cat who was never fixed and escaped, but it took just the one time to get pregnant. The owner ended up surrendering the mother and her two kittens to the Coalition.

Armbruster explained how they want to make sure people who are responsible and want to get their cat fixed will be able to. “We would love to see the city or the county invest in a low-cost spay and neuter clinic because there are so many people who can’t pay for their animals,” Armbruster said. “We just want to stop the over population of cats.”

Trap-Neuter-Return works with the feral cats in the area that cannot get adopted. TNR makes sure they are vaccinated and fixed before they get released so they can live their lives, but not contribute to the over-population problem. If a cat is born outside and lives about four to six months without a positive connection with other cats and humans it is considered a feral cat, which is essentially a wild animal. The best option for feral cats is to find someone close by who is willing to be a caretaker and provide shelter and food where the cat has already been successfully living.

Cat Coalition consists of 150 to 200 volunteers who all specialize in different things. Some volunteer opportunities include helping out at PetSmart adoption centers, foster cats until they can find a forever home, help trap feral cats, drive supplies to and from the pet food pantry, and most importantly to spread the word to anyone who might want to help out or adopt.

“We have about 70 fosters on our registration, but that doesn’t mean they all have cats to foster at any given time,” Armbruster said. “Some do TNR, some manage feral colonies in the city, some, like me, take in strays and some even bottle feed kittens when they are left without a mother.” Fostering applications are available on Cat Coalition’s website. Those interested will be registered for training and teamed up with a current experienced foster.

Lyn Keane, an active foster for CNY Cat Coalition, lives to help meet the needs of the cats in the Syracuse area. “My caring for [the cats] on a foster basis affords me the opportunity to have a positive impact on their lives when they need our help the most,” Keane said. “By fostering, we can help more kitties find loving homes without them ever having to be in high-kill shelters. Being able to care for and eventually place them in loving homes is extremely rewarding because we get to make a difference in not only their lives, but the lives of their adopters, as well.”

Not for profit organizations, like Cat Coalition, partner with local rescues such as PetSmart. PetSmart Charities is a foundation that funds local animal welfare groups to address cat homelessness and support its spay and neuter efforts. They have space in each of its stores around the country for dogs and cats, which are all from an individual rescue group. All Cat Coalition cats are put in foster care until they can be allowed to go to PetSmart.

“PetSmart makes those cages available to us and we decide which cats get to go,” Armbruster explained. “Cats go to the store for a maximum of three weeks, and if they aren’t adopted, they have to go back into foster care for at least a two-week turn around. We all hope they get back out and get adopted.” Between PetSmart and home adoptions, 530 cats were adopted last year through Cat Coalition.

Cat Coalition does funding throughout the year and also accepts donations on its website. On May 12-13 it is hosting a garage sale for spay and neuter donations at St. Paul’s United Methodist Church, 2200 Valley Drive. “We are always looking for donations to help us with our cats. There is municipal officials that deal with stray dog problems, but cats are on their own,” Armbruster said. “There are only us volunteers there to help, and we are doing all we can.”

All Cat Coalition cats are listed on their original website or through Petfinder. All of their special needs cats are free adoptions. This entails cats that test positive for Feline Immunodeficiency Virus positive, leukemia or are on a special diet or medication.

“People get scared when they hear these words, but these cats can still live longs lives with these conditions,” Armbruster said, rubbing the belly Boots. “We just want all cats to have a good life. They deserve that.”