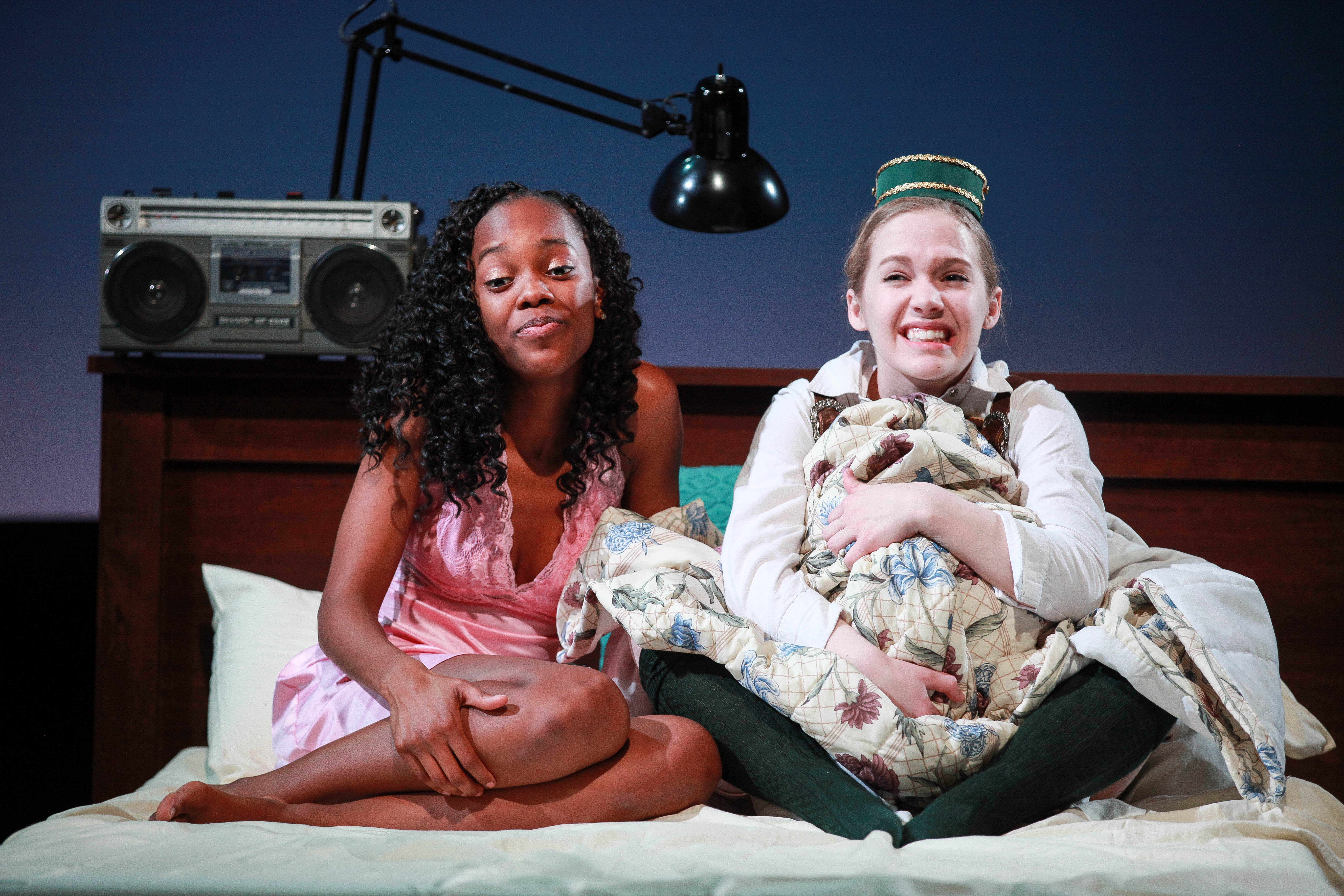 The show is being performed by the Syracuse University Drama Department.

Charlie Chaplin once wrote, “Comedy is life viewed at a distance.” In 1988 playwright Paula Vogel’s brother Carl, previously a children’s librarian in San Francisco, died of AIDS. After a year of grieving, Vogel found the distance she needed to speak of her pain.

At the MacDowell writers’ colony in New Hampshire, she began work on a drama titled To the Memory of Carl — Because I Cannot Sew, i.e., a stage work in lieu of a quilt. Four years after Carl’s death, and a year before Tony Kushner’s Angels in America, she opened The Baltimore Waltz, a comedy about coming to terms with the AIDS threat. The Syracuse University Drama Department production runs through Sunday, April 8.

Although Vogel has been forthright about autobiography as source, much of what is portrayed on stage is the playwright’s invention. We begin with a bare stage graced with a single chair, but director Katherine McGerr has run a line of footlights downstage, reminding us that what lies beyond it is artifice.

Separated by the continent, both sister Anna (Shanel Bailey) and brother Carl (Cormac Bohan) are suffering from different illnesses. Carl’s has advanced to the degree that he is dismissed from the San Francisco library, where he is popular with children. Openly gay, he wears a pink triangle on his chest while at work. With his expressive body set, Bohan stylizes the flamboyant gestures that spoof the view that homophobes might expect of him.

Meanwhile, Anna, a first-grade teacher, is suffering from the fictitious ATD, Acquired Toilet Disease, something that afflicts only elementary teachers who sit on commodes frequented by careless children. In sibling solidarity, Anna reflects on the shortness of their remaining lives. She proposes that the two of them embark on a worldwide lust tour in which they will both have sex with as many men as they can.

On their quest Anna and Carl run into perhaps as many as 20 characters, all played by the same actor: Sarah Hubner, a blonde and the shortest member of the cast. All these roles are known cumulatively as the Third Man in the program. In many ways this is the choice role in the production, and Hubner no doubt faced ferocious competition in landing it. Most of the responsibility for laughter falls to the Third Man, and to reach that goal, cross-dressing can be seen as an asset.

Some of the characters the Third Man must assume speak in different accents and engage in serious rumpy-pumpy, indicated by G-rated disrobing and thrashing around under a large blanket. There’s an unmistakably political edge to these farcical encounters, as Vogel is mocking the homophobic charge that careless promiscuousness is what brought the AIDS plague to gay men.

Hubner also appears as an officious physician in Baltimore, an abrupt TSA agent at the airport, and finally as the fedora-wearing Harry Lime in the deathless 1949 cloak-and-dagger movie The Third Man. Anna and Carl had been heading to Vienna to seek guidance from a renowned psychiatrist, but in Vogel’s pop-cultured worldview this is not the city of Freud or Klimt. We have had a foreshadowing of this, as the production includes musical quotations from Anton Karas’ obsessive zither score for The Third Man, one of the great earworms of cinema history.

The juxtaposition of comedy with dread can only work when the vehicle is created anew in each performance. In The Baltimore Waltz, director McGerr divides the emotional labor unequally. Hubner must reinvent the Third Man every few minutes, calling for more than a change of accent and wig. Shanel Bailey’s Anna, on the other hand, must be the compass needle constantly pointing to the inescapable. In 1992 as in 1988, the conclusion of being stricken with AIDS was never in doubt. She projects moral weight.

The Baltimore Waltz might be popular in regional theaters, but it is an offbeat choice for a large, highly selective university drama program. Three students dressed in kabuki black moved sets and props instantly and silently, each an understudy for a speaking role. Even though they were supposed to be invisible, we saw them as individuals: Lily Schmidt, J.J. Sheehan and Quinn Hemphill.