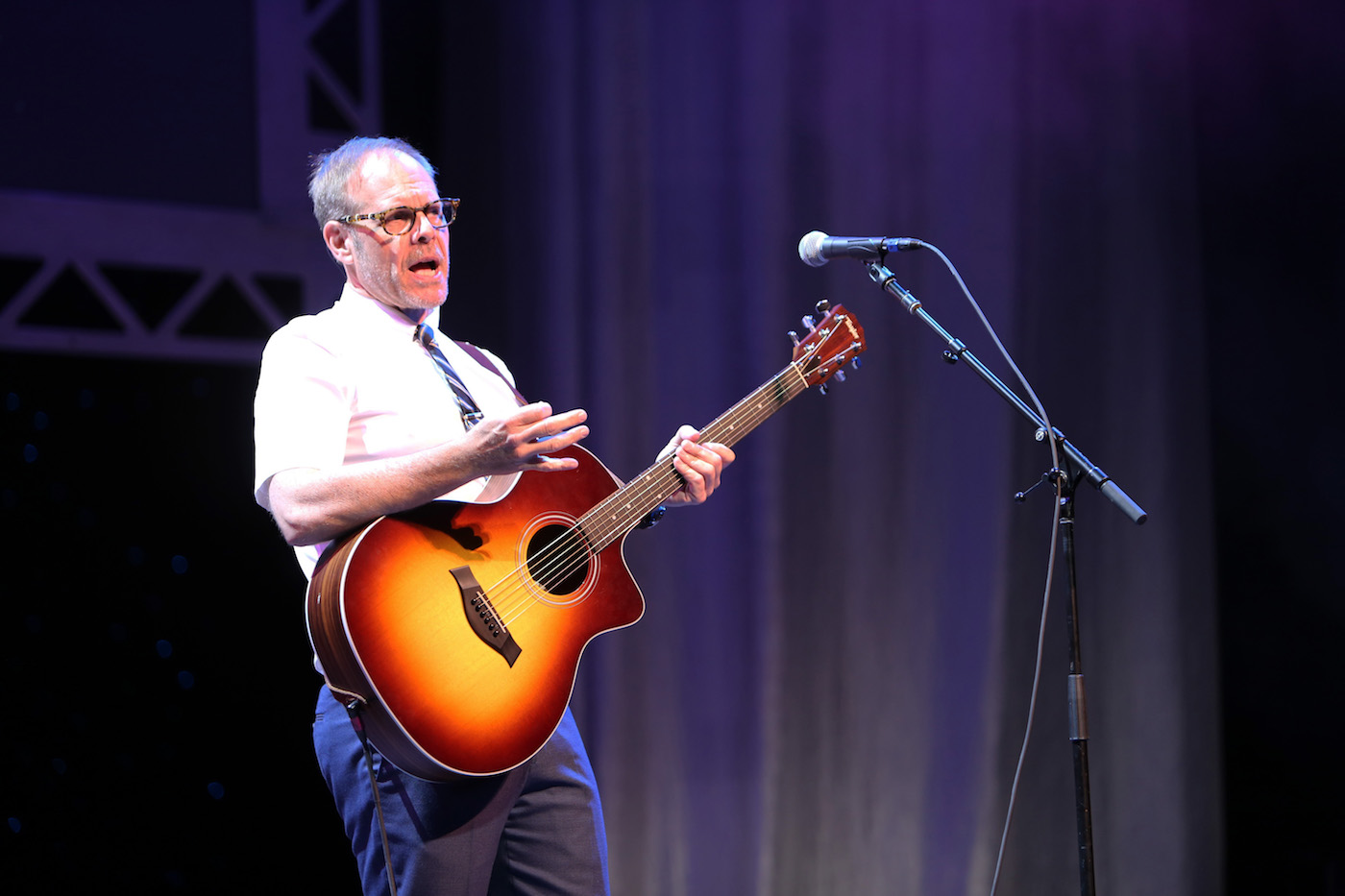 Alton Brown discusses his “Eat Your Science” tour ahead of Syracuse date.

Multitalented television and food celebrity Alton Brown will bring his “Eat Your Science” tour to the Mulroy Civic Center on Tuesday, April 26, 8 p.m. The Cutthroat Kitchen host said during a phone interview that this tour offers a new setup with more shenanigans and surprises.

Is this your first time in Syracuse?

No. My “Edible Inevitable” tour played in Syracuse almost two years ago. I meant to look up that date, but I got stuck on my tour bus.

Can you talk about your background as a cinematographer?

I spent 10 years as a cinematographer and as a commercial director. I directed TV commercials for a little over eight years before I attended culinary school and decided to make food shows.

As a hobbyist cook, I couldn’t find a show that I found entertaining and educational. And so I thought, “You know, I bet I could make a better one.”

I really wanted to move away from commercials, which I didn’t find very rewarding. I decided my place in the world would be making food shows. After quitting and two years of culinary school I started making the show that ended up being Good Eats, which ran for 14 seasons (for 244 episodes from 1999 to 2012 on the Food Network and Cooking Channel).

Do you have any education-based schooling, or did that naturally develop?

Oh, no. My college degree is in theater, and I have a culinary degree. I have absolutely no educational degree. I’m really glad for it. If I did pursue an educational background, I probably wouldn’t be able to do half the stuff that I do, if somebody taught me to do it that way.

Along with educating the public about food, how has the art of storytelling developed with your programs?

There is a lot of visual storytelling. Even writing a recipe is telling a story. I approach everything that I do in media from a standpoint of the story. Even a single Instagram photo should tell a story. I see it all as fun, as one function: storytelling.

With your television shows, particularly the current Cutthroat Kitchen, do you craft and mix up different methods to tell each episode?

With Cutthroat Kitchen, because it’s a game show, it follows a form. We have the sabotages in the show that we put a lot of creative juices into. There is a hallmark of my work in all of this: We’re constantly trying to come up with new, creative storytelling techniques.

There are many aspects to your show: games, multimedia visuals, music. Even with television appearances you’re having fun. How is the writing process? Do you ever feel overwhelmed with how much you put into it?

The advantage is that I’ve taken the other tour out and have played over 100 cities, and so I know what worked in that show. What you have to do is figure it out. I want brand-new stuff. I want it to be fresh. At the same time I know what works, what to tweak. Then you have to figure out how to start editing it.

I wanted to build a very specialized device, and it was very expensive. In the end, when I got it on stage, when we started to build the show — just two weeks ago in Charleston, S.C. — I realized it didn’t work. It wasn’t working in a theatrical way, and I had to cut it.

Part of this job is never falling in love with your ideas to a point where you’re not willing to cut them out. It was really painful to cut an idea that I loved and a device that I spent a lot of money on. It just wasn’t working.

You can’t always know exactly what’s going to work and what’s not going to work in a theatrical environment, especially when there is a lot of multimedia going on. There’s a lot of recorded pieces and cameras on stage. You will think: Well, maybe there’s a small moment but once it’s photographed it becomes very large. There is kind of an X-factor. When you’re doing it, you just don’t know if it’s going to work or not. That’s the scary part.

The first few shows you do, you’re moving things around and trying things different. You’re performing for an audience, and you have to make sure the audience gets their money’s worth. It’s a refining process.

What are some aspects of your shows that have resonated with fans?

I’ve stayed true to what resonates and what doesn’t. Every house is different. One night an audience will laugh at one point, and maybe another night they don’t. It depends on so many different factors.

So, the audience reaction and participation helps drive the show?

Once a volunteer is on the stage, I let that dynamic drive the show. Typically, my shows have two volunteers: one in the first act and one in the second. What they do and how they react to things informs how that show is going to go. I just pick the volunteers to come on stage, and I’ll roll with that and make the most of the dynamic of whatever that person brings to the stage.

What has pushed you to do these live shows? Was there a deciding factor?

I’ve been doing large format on-stage food demonstrations for years. I was never able to mount anything large (tours). It wasn’t economically feasible unless you got a huge amount of support. I’ve always enjoyed doing the live aspect of shows, corporate or what have you.

Eight years ago I realized that I wanted to make this an annual activity, but I needed to find the time to do it, to put it together and tour. At the time I was producing Good Eats, and it made things difficult. When I was on Iron Chef America and not producing something of such a large scope, it was easy to carve out the time to put together the road shows.

Do you have any superstitions or pre-show rituals?

Nope. I just do it. I know people do and find it useful, but I just don’t. I try to be prepared, but I don’t jump up and down three times, turn in a circle or drink some special potion.

What are some of your future projects?

I am working on an Internet project, which will be similar to Good Eats, only it will be web-based. I also have a new book coming out in September called EDC, which stands for Everyday Cook. It will feature 100 original recipes of the food I cook on a daily basis. It’s a special project, because it’s the first time we’ve produced photographs to include in the book. They are very stylized and cinematographic; all the pictures were taken with an iPhone.

What are the difficulties with coming up with your own recipes?

It’s making that translation to just on-the-spot cooking and proper recordkeeping. It’s turning that experience into the written word that is reliable and accurate. It takes a fair amount of discipline, which, in my day-to-day cooking, I don’t normally have. I like to cook off the cuff sometimes, but you have to be more conscious when developing recipes.

Do you have a favorite ingredient?

I have my favorites, not just one. I gravitate toward many earthy spices: sumac and cumin, for example. I’ll pick up and run with any flavor combination that gets me where I want to go.

Usually, I’m trying to find new ways to frame a familiar flavor. I’m interested in basic flavors and will try to find some spice or herb combination that, let’s say, makes eggs taste more like eggs. Most of us enjoy new flavors, but in the end we’ll crave something of the expected and ordinary.

Who has inspired you through the years to pursue food, to be a writer and to exude creativity?

I admire artists and craftspeople who constantly find ways to reinvent themselves, those who never find a comfort zone. They always find a new avenue to branch out into.

It’s easy to throw out names of people who I admire: science communication people like Bill Nye, who has had huge influences on generations of people, or Julia Child, because she opened up the eyes and minds of people to French cuisine. Ultimately, I look across the business and media worlds, and I’m inspired by anybody who reinvents, whether it’s fashion, architecture or how a novel is written.

You have to peruse culture to find it, but sometimes you go a long time without it.

What are your feelings on inspiration through social media vs. print?

You have to look at the percentage of time people spend with those platforms and how they’re consuming media. Different media penetrates different levels. If you read a novel, that penetrates your mind differently than a Facebook post.

Social media is a river of data that constantly flows all around us. I’m cognizant of it and its power with relationship-building. It’s how I can connect to my audience. It’s also different than going to a museum, reading a novel or watching a great film.

What’s up with the Post-It Note pictures on Twitter?

I didn’t like having to be kept to 140 characters. If I wanted to draw something, I wanted to draw something. Above all, I didn’t like the Twitter app on my phone. If I took photographs with my phone, I could post directly to Twitter. It was part laziness and part kind of hacking the system. Now, it’s become a trademark. I don’t know how many Post-It Notes I’ve gone through.

Aside from the educational aspect, what do you hope people take away from “Eat Your Science”?

I want people to walk away and say, “Wow, that was a couple of really fun hours. We went as a family and had a great time.” I hope a couple days later people will continue to talk about how the show got them thinking about some aspect of food. My show is very family-friendly and suitable for all ages. I can’t wait to see everyone there.

Free Will Astrology
Treats for All Reasons
To Top