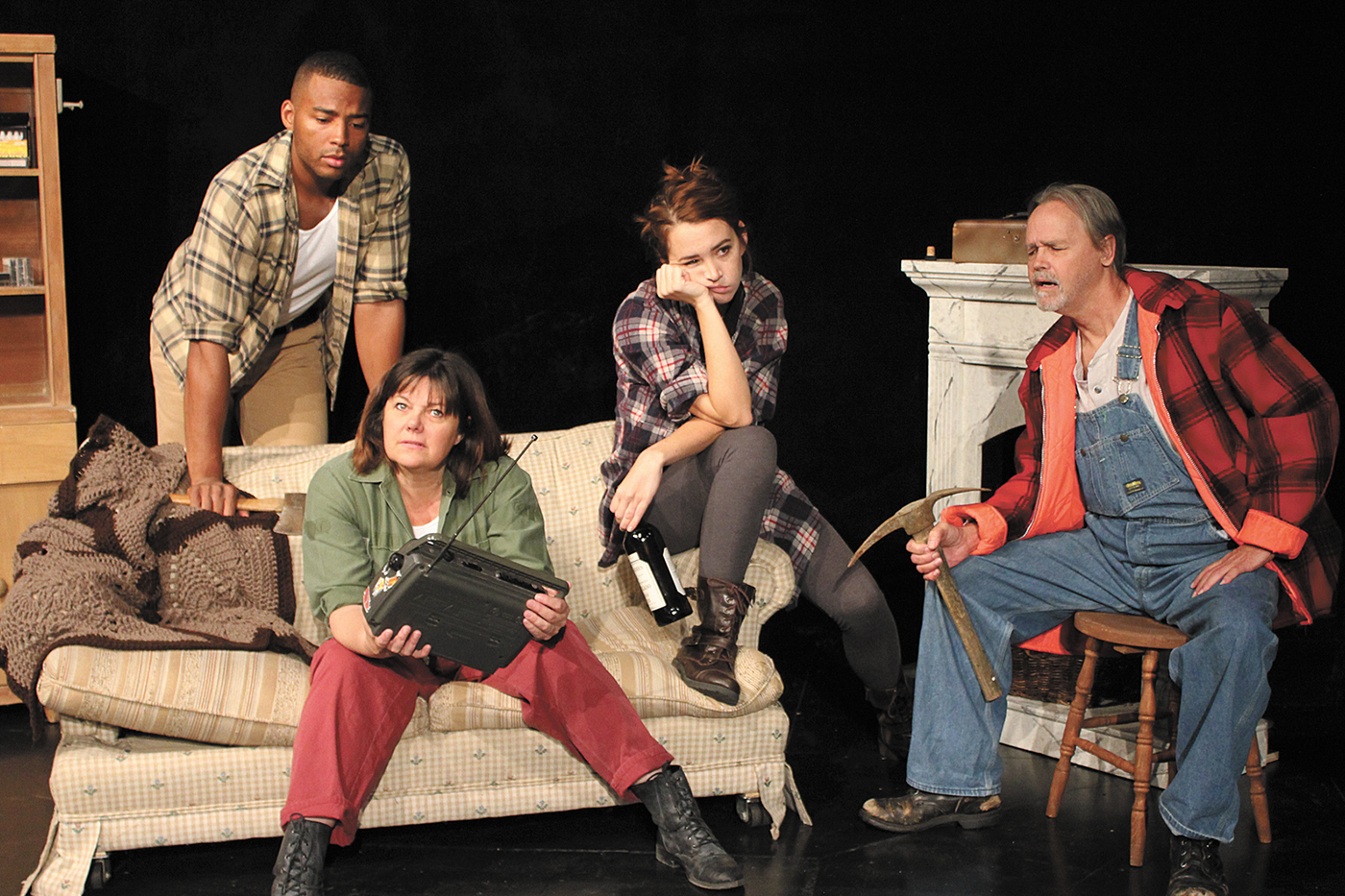 One-act plays don’t get no respect. Unlike short stories, which appear every week in The New Yorker magazine, one-act plays are rarely mounted these days. To get an evening out of them, a company needs at least two in tandem, even if not by the same playwright or on the same themes.

An audience is more willing to adjust to moving from one act to the next if they both share the same cast members. This is the way Cortland Repertory Theatre Downtown presents Adam Bock’s The Receptionist and Conor McPherson’s The Birds, running through Sunday, Oct. 23.

The theatrical space at CRT Downtown, 24 Port Watson St., is a large black box in which stage and seating can be reconfigured for each production. This time a long, narrow stage lies between two ranks of opposing seats with thick cushions.

CRT Downtown retains the intimacy of Cortland Rep’s summer shows at the Little York Pavilion, with the audience a few feet away from the performers. Eric Behnke’s lighting and, even more crucially, Seth Asa Sengel’s sound design are both perfectly realized and state of the art.

American Adam Bock and Irishman Conor McPherson may not know each other, but there are reasons for linking them here. Both have enjoyed enthusiastic critical acclaim even though both are in their early 40s. Three of Bock’s plays have been produced by Ithaca’s Kitchen Theatre Company, but this is an area premiere for McPherson. Both their one-acts call for two women and two men.

For Bock’s The Receptionist, Beverly (Deborah Ann Smith) is the title character, at a firm whose enterprise is initially undetermined. She answers the phone most of the time, but near her desk are chairs for visitors whose numbers have not come up. For a surprisingly long time it seems as though nothing is happening as we eavesdrop on her answers. Many company matters and some personal issues swim by in a shoal of red herrings. A friend named Cheryl wants to get involved with a married man.

Two co-workers happen by. Gray-haired senior executive Edward Raymond (Chris Nickerson) speaks politely but moves on quickly. Attractive, red-haired younger executive Lorraine Taylor (Whitney Conkling) wails over the pain of her recent divorce and her loneliness, wondering aloud whether she too might cross the taboo barrier of dating a married man.

An imposing black-suited visitor is almost ignored: Mr. Dart (Leroy S. Graham), who says he’s from the “central office.” Beverly chortles that she has a friend there, but this may be a literary/cinematic allusion. In Citizen Kane Orson Welles as publisher Kane instructs a snooping reporter to employ a cover by saying he’s from someplace enigmatic and threatening, like the “central office.” Hmmmm.

Raymond enters, utters some unsettling words before retreating to his offstage office, and then Dart makes his move. After an incomprehensible exchange, a terror-stricken Raymond flees from his office and sprints across the stage. What does the company do? If the top executive is fleeing, how can the others, even the resourceful receptionist herself, find an escape route?

Conor McPherson’s The Birds, which opened in Dublin in 2009, as well as Alfred Hitchcock’s famous movie The Birds (1963), purport to adapt Daphne du Maurier’s 1952 novella of that title set in Cornwall. Put the three side-by-side and you would not guess they are related without being told. There is not a line in the McPherson work that also appears in the film.

Du Maurier’s text, the most transparent of the three, is grounded in Cold War paranoia, with memories of World War II air raids. McPherson takes from it the post-apocalyptic vision of nature’s vengeance on humankind and one hard-bitten farmer, Nat (Leroy S. Graham), now living by the sea, apparently in New England.

At the beginning of the action Nat is holed up with Diane (Deborah Ann Smith) in a remote cabin, with boards over any possible entry. We never see an avian creature, but we hear threatening caws. Electricity is down, and there’s not much to eat. What looked like a can of pears is filled with onions instead. A person of more education, Diane appears to take hold of the narrative, typing away on a small laptop and sharing her private feelings in a voiceover.

Despite the lethal danger of being outside the cabin, Nat and Diane have two visitors. Farmer Tierney (Chris Nickerson) initially looks malevolent, arriving with a wire mesh over his head, but he is only reporting on the prospects for looting abandoned goods.

More important is a disheveled but beautiful woman named Julia (Whitley Conkling), whose past and motivations are murky. Although there had been little hint of romance between Nat and Diane, the presence of a comely woman given to frightening language like the “giddy enthusiasm of murder” raises tension. As weeks pass, we learn that Julia has become pregnant. Ultimately the tension is more philosophical than sexual.

Director Shaun Peknic, a veteran of summer productions, links the three newcomer performers and one veteran into a streamlined, cohesive ensemble. Both Bock and McPherson give the women more to do, especially Deborah Ann Smith, who knows how to make office routine amusing in The Receptionist, with Whitney Conkling creating the most striking contrasts in the two one-acts.