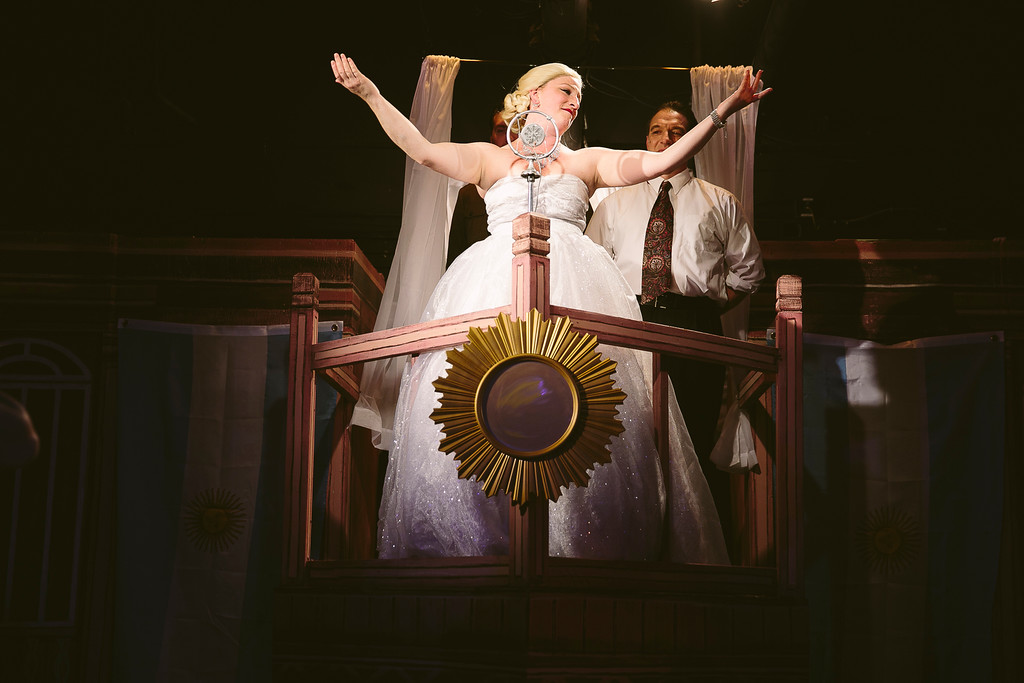 One of the most popular shows of the 20th century “Evita” comes to the Central New York Playhouse.

The Andrew Lloyd Webber-Tim Rice rock opera Evita, one of the most popular shows of the 20th century, has been strangely absent from local stages in recent years. The revival by the Central New York Playhouse, through Saturday, Aug. 6, comes with two initial distinctions. It is the first directing assignment for ubiquitous music director Abel Searor. And it marks the first lead in a musical for the versatile Erin Williamson. It is a big step forward for both of them. Evita might play fast and loose with some minor details, but at its center is some pretty solid history. The real Eva Peron came from the humblest of backgrounds, suffered through a morally shady youth, then rose to power on the arm of dictator Juan Peron. Both Perons enjoyed fanatic populist support, and could portray themselves as persons of the left or right. They robbed what had been one of the richest countries in South America, from which the Argentine economy has never fully recovered.

Eva (“Evita” is the affectionate diminutive favored by the masses) turned blonde and fancied herself a superstar, craving international recognition, which she was denied. Death from cancer at age 33 transmuted her into a mythic figure. Not surprisingly, Evita has always been unpopular in Argentina.

The one element in Evita that has dated the show is the portrayal of Che Guevara. Dramatically, he’s a corrective Greek chorus and Evita’s conscience: Jiminy Cricket with a beard. When the show opened in 1978, his image, representing popular rebellion, was reprinted on sweatshirts throughout the world. Although Argentine-born, he never interacted with Evita. Through his association with the Castro regime in Cuba, now in ruins, he looks different to us today.

Although Searor’s program notes say Evita is a show about love, his informed stagings tell us that popular love for the dictator’s moll was often misplaced. What makes Evita as a dramatic character so interesting is that she contains so much darkness, almost a female Jack the Knife. What other female lead is so morally ambiguous? The reason that Che has virtual double billing is that the character in the show has so many failures with which to charge her.

Williamson, sometimes billed under her married name of Erin Sills, has been preparing for this role for some time. We knew what a big, expressive voice she has from her Fantine in the Wit’s End production Les Miserables (June 2014), and her Evelyn in Rarely Done’s The Shape of Things (March 2010) was one of the most chilling female killers of the decade. Along with being the title character and lead, Williamson’s Evita appears in 13 numbers, growing from a rustic brunette adolescent to a cosmopolitan celebrity. The tango that everyone knows, “Don’t Cry for Me Argentina,” is first an exercise in cynicism and secondly a heart-rending plea.

Central New York Playhouse’s spending on this production has been well-invested, especially the costumes (credit for Carleena Manzi, Stephanie Long and Laurie Rolnick) for many, many changes within the large male and female ensemble. Next to those are the posh wigs, designed by Liam Fitzpatrick, Jennifer Pearson and Kathy Gilbert.

Fitzpatrick, who also serves as lighting designer, contributes mightily to the production. Already one of the best tenors in community theater, he delivers an absolutely flawless Che Guevara. A champion of the poor, as the script demands, he does not take a superior moral tone but rather calls Evita’s self-deception. There’s nothing lovable about him because he’s usually angry.

Even less sympathetic is the dictator himself, Juan Peron (Rob Searle), who tells us in his first number that politics is “The Art of the Possible” and that he has no ideals beyond self-aggrandizement. He discards his mistress (Carleena Manzi) without a thought to move along with Eva. The mistress’ shrug-shouldered lament, “Another Suitcase in Another Hall,” sets the tone. Searle, who shaved his beard for the role, gives us a Juan who is neither a weakling nor a fool, but rather as a man who could lead millions.

One of the few redeemable characters in the drama is naïve Agustin Malgadi (Ben Sills), and his “On This Night of a Thousand Stars,” whom Evita exploits to escape the boonies.

Choreographer Sami Hoerner, making a debut appearance, honors the place of the tango in Argentine culture. And Dustin Czarny and Abel Searor’s set design features a balcony that defines Evita’s place above the crowd.