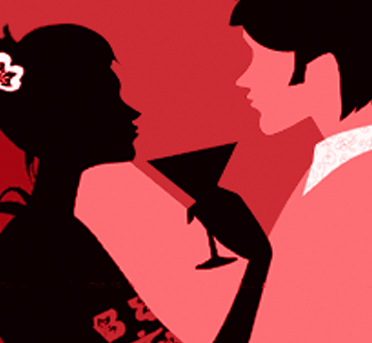 The internet is full of lists and how-to articles from random sources.

There is one thing that I have to try, because I’m curious about it. There is no pride with admitting to what this thing is, but it’s something some of us may have endured due to the sheer curiosity of it…or giving in to the coaxing friend(s)…or you were dragged out of your home, kicking and screaming.

To some it’s an awful fact, and maybe some people have found success stories through a night of it. I don’t judge, and there was interest at one point joining a few (now former) coworkers. The horror stories that are shown in movies and television shows are the first scenarios that play out in my mind. There is also possibility for the absurd to blossom in my head as well. Take for instance a duck sitting at a table with a rabbit, one telling the other that it’s not going to work because one cannot tolerate how the other speaks. However, the next table the rabbit goes to may have a fox, and the predator-prey relationship can be twisted with dirty jokes and euphemisms about one eating the other. (Somehow David Sedaris came to my mind for some reason…oh, the animals and probably due to my running into a friend, one who hails from Binghamton.)

Before I go further… Angelle, the brains behind She Drives a Vegetable Car, essentially gave me the idea for this segment, an idea that sparked from a post of hers (You’ve Got to Have Internet Friends). She’s a delight to follow, by the way. She starts off her post with:

“Ten years ago, if a friend had mentioned she met a guy on the internet I would have automatically assumed he was a serial killer ready to make her skin into a dress. At the time the internet was just a wonderful place…Making new friends through this new found wonder was absolutely out of the question as I was pretty sure the only people who did that were lonely cat ladies, the aforementioned serial killers, or would be serial killers who needed practice.”

– Angelle, She Drives a Vegetable Car

The internet is full of lists and how-to articles from random sources. Almost everyone claims to be an expert on a variety of things, so you have to choose your information wisely. Jane Fonda is an expert at dating and sex. Cameron Diaz is a self-proclaimed health expert. Bobby Flay can supposedly cook food that isn’t on a grill. Should you choose poorly, you’ll turn into skin and bones.

(I am not an expert just so we are all in the clear.)

(Also, I wish that Templar Knight would follow me around. But hearing that reminder after every decision made would get annoying.)

However, in today’s technologically-dependent society, the internet is a significant source for offering a variety of platforms to help you shop for your potential partner. Eros is the CEO of OkCupid. God and Jesus combined their efforts with starting up Christian Mingle. Poseidon reminds you that there’s Plenty of Fish out there. Craig makes sure the Missed Connections are actual connections on his list. Let’s not forget the brains behind eHarmony or Match. Two of these I have tried, and a go was taken with an App called Tinder.

Let’s do a little speed dating using these outlets.

Table One:  Plenty of Fish

There is a first time for everything.

Plenty of Fish (POF) was tried in 2009. My trip to China, which pertains to one of the matches or fishes (sounds belittling to me), is a chronological point of reference to help me determine the year this was attempted. Obviously, all of these relationships did not work out. However, before we go into the types I met, let’s keep in mind this is a free service. Free essentially is what you pay for–nothing, and that’s where your expectations should be. With POF, I quickly learned that I have a severe allergy to those who don’t write/communicate well. Ignoring brief messages was easy. Ignoring messages with numerous misspellings, grammar issues, LOL’s and other discouraging abbreviations, and other communicative faux pas had been an easy process.

The fifth and last girl that I met off of here was a catch, but due to my reluctance–unwillingness with having to admit we met off the site–the relationship dissolved.

This app zeroes in on all the singles around you; well, those who sign up for it. My cousin told suggested once that I try it; friends told me that another one of our friends called Tinder a booty call app. It’s shallow as hell, rating others if they are attractive or not before seeing where whatever leads. It’s perfect if you spend your summers at the Jersey Shore. After a lack of success, I deleted this app.

The slogan: “Find God’s match for you.” Really? “Gives you the tools to find God-based relationships” (Christian Post). Really? The latter pops right up when you Google Christian Mingle.

The things I do for research. Now I have this website in my history.

I do know the smell of bologna when I smell it. I don’t remember hearing about this in The Bible, or in any of my religious ed classes. I’m pretty sure God Himself did not approve that slogan for such a dating website.  People say God has a plan; this is not what was meant by plan.

The fact that I’m even considering this as an option blatantly shows I love being facetious. Talk about putting the hopeless in hopeless romance. Go here for a great hearty belly laugh… or a random hookup. Let’s play a card game. I’m kidding, but not really.

This site is seemingly the most popular. A friend of mine was on this site, and one day she was perusing through her matches. It was evident that most of Syracuse was on here… and that scared/intimidated me a bit. Are there that many single people in Central New York using this website? From personal experience, it seemed to be since there was barely anyone on eHarmony. However, the latter matches you up specifically; all of the singles were displayed for my friend, and they all had compatibility ratings. However, it is the only site that I know of–sans research–that offers mixers. However, any bar, happy hour is technically a mixer in itself. There is no sense in paying for what is already available at no charge.

Been there, done that, and reconsidered returning to it. Using this site resulted in the most luck… if you want to call pen pals luck. The result of trying this for two and a half months resulted in few matches in the Syracuse area, which says a lot (I guess). Of the few girls I actually went on dates with, they all were better on paper (screen). From what is remembered, all the Canadian girls (my geographic area had to be expanded) and Rochester women I wrote to were solid matches, but distance was a determining factor.

However, the actual dates–there were few–varied: the short-message writers were boisterous, and the long-winded writers were very quiet.

Another friend explained to me his mixed results of using this dating site and his unwillingness to actually leave its service. Staying on there gives a dater more options I suppose. However, you can do this with a free dating site.

With a comma (Ok, Cupid) this place becomes a different type of dating site. It’s saying, “OK, Cupid, I give up. I need your help.“

However, Cupid (Roman) is a mythological being (Eros is the Greek parallel of the god), and finding love should not come with consequences (such as selling your soul to a divine being). OkCupid could essentially be called Pagan Mingle… OkGod…

Back to  Life / Reality / Fate

I’m not going to explain or apologize for being facetious. Fact is that people do find (true) love on a dating website. A friend of mine met his wife on Plenty of Fish (after my being reluctant to tell him which dating site gave up on at the time), and they’ve been married for a few years now; this couple has an adorable child as well. It seems to be they are all doing quite fine.

For the rest of us… Well, I cannot speak on behalf of all the rest of us. We either give up, or we can keep going. (They say the person you are to be with comes when you least expect it and/or aren’t looking…whoever they are.) Fate, it is said to be; but keep in mind that Fate is technically mythological, divine as well. The rest of us have friends, relatives, or friends-who-have-friends-or-relatives looking for a partner in this life just as much as you are.

We come down on our friends at times by saying, “Just because two people are single, it does not mean they will fit.”  That’s true, but we can say that line before a date or after the relationship dissolves simply to blame others. A relationship does not work out, but it could simply mean that the two are not compatible; this is found out after two or three dates.  At least your family and friends give a care to actually make some kind of effort to set your moping self up. If all else fails, if you don’t want to suffer through the malarkey and constant heartbreak, contact a professional matchmaker. This could get expensive, however; the set up isn’t guaranteed either. Syracuse is a city that all of the dating sites to make it seem smaller. You have the pay sites will/could give you more calculated results than the free ones… but there is no guarantee.  You are still picking and choosing who you want to pursue by judging profile information, pictures, and (in my case) maybe grammar. In real life, if you see someone attractive and there is a desire to talk to them–regardless how shy you are–you should be talking to that person. Despite how painful the warming up process may be, go with it. You’re going to knock your head against a wall after the fact of saying something silly–interchanging the first letters of two words in my case–or not saying anything at all.

The guy who opened the door for you. The girl who (accidentally) spilled her drink on you. The person you helped pick up their files after they fell out of busy hands and onto the floor. The friend-of-a-friend who, in response to a post or comment, simply sent you a message on Facebook because they find you cute.

The person you are looking for could be sitting in front or next to you as we speak. #takeatour (shoes)
Show us your Muscle
To Top