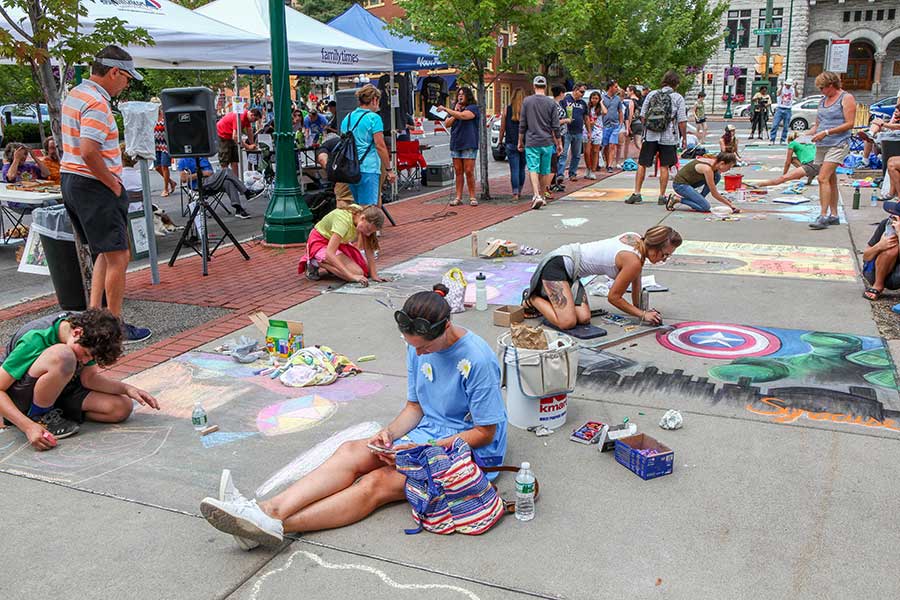 A pink parrot took flight a few squares up from a very meta chalk painting of the late artist Bob Ross making another painting. Farther down the line, an octopus in an antique diver’s helmet burst from the pavement, with an arrow from the artist pointing to an “X” with a note: “Stand here for 3-D.”

Artists descended on the block just after 8 a.m., with either their own chalk or grabbing handfuls of the provided pieces. Dolly and Coco the Clown were on site doing face painting and ribbon dances in the blocked-off street. Victoria Bingham of Caricature Classics also lent her artistic talents to the day.

Veteran Street Painting oglers whispered one word as they perused from one colored square to the next: passion. Artists set up shop on the ground for hours, dodging rain sprinkle scares with plastic coverings and preservative spritzes from hairspray canisters to create pieces that would, inevitably, be washed away, all in the name of creativity (and the chance to win cash prizes).

This year’s piece was of a dog done in bright, blocked neons. Amiah said she saw the art style online and wanted to try it out for herself. The piece won over the judges and the public, as she also took home the People’s Choice award.

Amiah said she makes art at home, creating and selling her own paintings, and brought her own soft pastels to use. “It feels great!” Amiah exclaimed about her double win.

Good things came in pairs in the teen division, as a young Liverpool couple put their creative skills together to take first place. Anna Duffy, 16, pitched the idea of entering the contest to her boyfriend Bryan Poppe, 17. Bryan sent her an idea the night before: a more abstract and whimsical piece, featuring two figures standing hand-in-hand in the center with a heart above them.

This was their first year participating, although both are creative hobbyists: Anna does photography, Bryan sketches for fun.

“We didn’t expect it,” Anna said of the win. “Everyone here is so creative. It’s amazing seeing everything.”

The adult division prize went to 17-year-old Bryan Fernandez (his 18th birthday will be this month), with his recreation of an iconic hip-hop image: Biggie Smalls in his “King of New York” crown. Fernandez is an artist by profession; his family moved from Yonkers to Syracuse just two years ago.

“I entered last year, and I was amazed at the work I was seeing,” Bryan said. “I told myself I had to do this again to show I progressed and to sort of redeem myself.”

As a New Yorker, he’s obviously a Biggie fan. He had recreated the piece before on a smaller scale and felt he was able to transfer a lot of emotion — both the expression in the piece and his own feelings — to the work. That made it a perfect work for Street Painting.

“It was only a year of extra experience, and I was able to get first place,” he said. “It’s amazing.”

The recent Henninger High School grad plans to head back downstate soon to attend the School of Visual Arts.