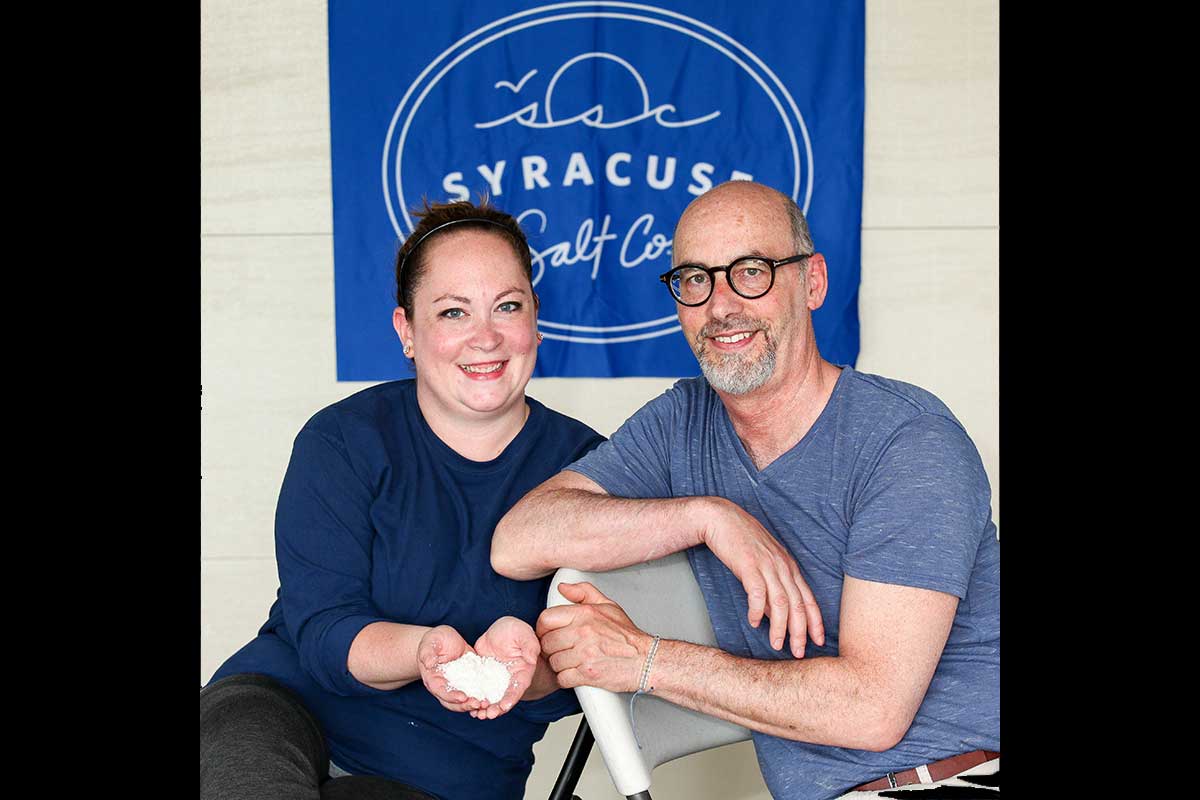 In the mid-1800s, Syracuse was the capital of salt production in the United States, supplying much of the nation’s table salt and salt for other uses. The industry provided many with jobs and gave us our moniker, “The Salt City’’ (not to mention the salt potato). The area around the southern end of Onondaga Lake was home to thousands of solar evaporation sheds and hundreds of boiling blocks, where water was pumped from salt springs beneath the ground and evaporated to make salt.

webbanki.ruSalt hasn’t been produced in the area in more than a century. But with feet planted in the present — and a keen fascination with the past — the father-daughter team behind Syracuse Salt Company is getting closer to its goal of harvesting, packaging and selling honest-to-goodness Syracuse salt.

Syracuse Salt Company was founded in 2015 by David Iannicello and his daughter, Elizabeth “Libby’’ Croom. They take sea salt from the Pacific Northwest, infuse it with ingredients like lemon, lavender and ghost pepper, and repackage it under their own label. They collaborate with local partners to give their salts homegrown flavors, including Finger Lakes wine, locally roasted espresso and locally grown hops and black garlic. Their product line includes about 17 varieties and is sold at local markets and events, in boutiques like Wildflowers Armory and Metro Home Style and online.

In May, Syracuse Salt Company signed a lease for a commercial production space at 333 Pulaski St., between Bear Street and Hiawatha Boulevard. They brought in equipment to drill a well and are pumping mineral-rich, briny water from beneath the city. They will soon offer two kinds of Syracuse salts: an “ingredient salt’’ for use in everyday cooking and baking and a flaky “finishing salt’’ to bring out flavor and a bit of crunch to foods.

“We are really excited about this,” Iannicello says.

“We can’t wait for it all to come together here,” adds Croom, surveying their work-in-progress space.

David worked in the landscaping industry for many years and formerly served as grounds supervisor at Hobart and William Smith Colleges in Geneva. He likes the science of salt making and is largely responsible for the production and the infused salts. Libby works full time at Syracuse University and handles marketing, promotions and events for Syracuse Salt. From the outset, it has been their goal to drill into Syracuse’s past and introduce hyper-local salts to their product line.

It hasn’t been easy finding a place to do so. Salt water used to be found close to ground level in the lakefront and Inner Harbor area, but they had to drill 283 feet to get the kind of water they’re after. “You have to dig really deep,’’ Iannicello says. There is no big drill or rig on site. The only visible sign of activity is a hole in the ground and an orange cone.

The production process is fairly simple. Using electricity and a submersible pump, cloudy-looking water is pumped into a large holding tank in the warehouse area of the former garage door company on Pulaski Street. The water is allowed to settle for a few days so iron, which gives the water an orange cast, can work its way out. “You don’t want orange salt,” Iannicello says.

On a recent weekday, Iannicello flipped a spigot and ran water from the base of the holding tank into a bucket to check for clarity and foaminess — an indication of the presence of salt. After settling for several days, the water is boiled and evaporated off in large, stainless- steel restaurant-grade steam pans to create crystals of clean, coarse, bright, white salt. The salt must dry a bit before it is packaged. “Chefs are really excited about this salt,” Iannicello says.

Last summer, Iannicello and Croom were able to pump water from a well about a half-mile away to do a test run of locally harvested salt. They shared samples with some local chefs, who gave it enthusiastic reviews. One even suggested a name: Fleur de Salina, a local twist on the French sea salt Fleur de Sel (“flower of salt”).

“Our most important mineral sitting literally under our feet disappeared for over a century. . . until now,’’ chef Eamon Lee said in a Facebook post. “It’s delicious, sweet, floral and has a pleasant and fresh crystalline crunch.’’

Adds chef and restaurant consultant Sarah T. Hassler: “I loved the minerality of that salt. We often add salt thinking only of enhancing salinity and perception of taste; we don’t always pay attention to the complexity that different salts can bring. It’s like tasting and understanding terroir in wine — you know it goes beyond the basics, but what you care about is that taste of place.”

Iannicello and Croom plan to eventually use local salt they produce for their infused salts. Why go to the time, trouble and expense to bring back salt production — on a small scale — in Syracuse? They’re inspired by the local food community, local history and their own family history. David’s late brother, Daniel, a chef who owned and worked in local restaurants for more than three decades, introduced him to artisan, gourmet salts and how they can add complexity and crackle to food.

Iannicello credits Len Montreal, president of Montreal Construction Company, with helping him and Croom realize their Salt City goals. Montreal owns and has redeveloped dozens of buildings in the lakefront and Inner Harbor area into retail, residential and office spaces. He owns the building where Syracuse Salt Company has set up shop and gave them the go-ahead to drill on-site.

“I can’t say enough good things about him,” Iannicello says. “He looks for ways to make things happen and work.”

For more information on Syracuse Salt Company, go to syracusesaltco.com.

Can You Dig It? Finger Lakes vineyards adding canned wines to production lines
To Top