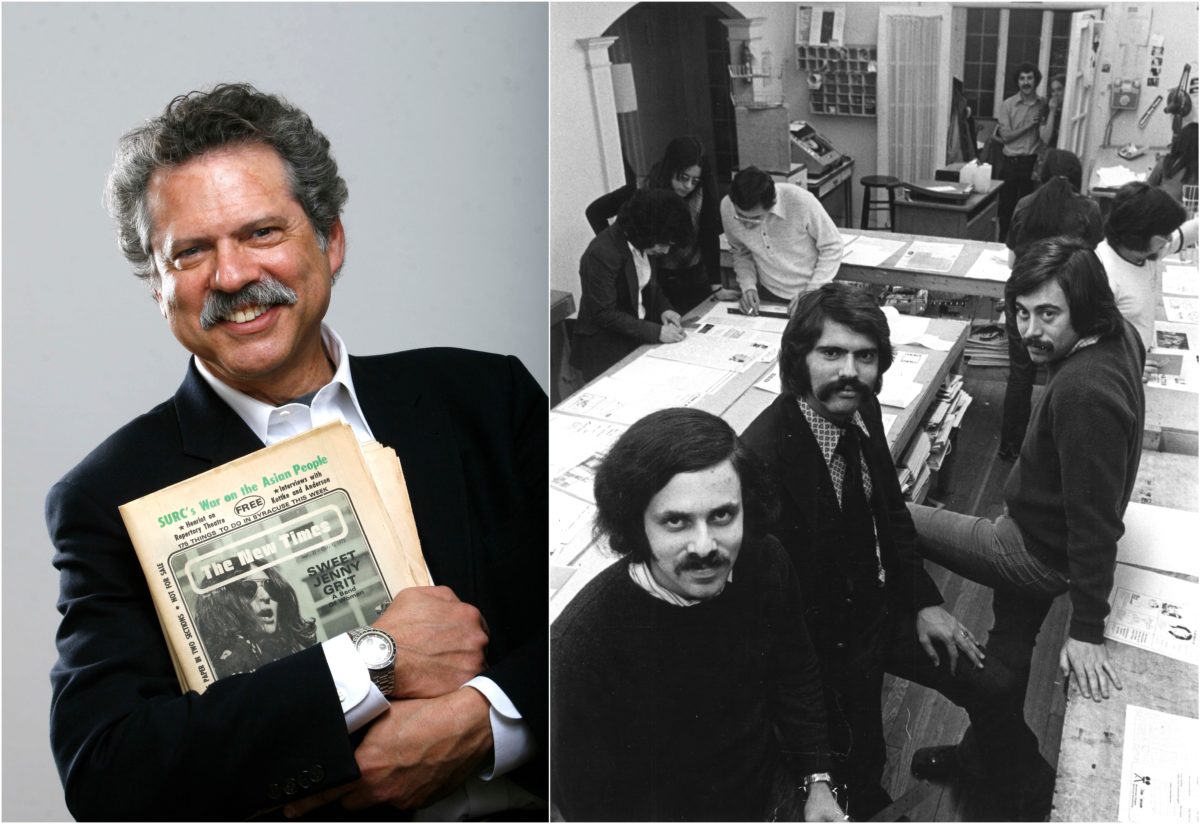 The Syracuse New Times’ origin story starts at the defunct Waldorf Diner on Erie Boulevard in the fall of 1968. Over a hottle of tea and a shared plate of home fries, I was discussing with my college pal Jack Myers what we were going to do once we graduated from Newhouse that June.

Neither of us were eager to take a corporate job. We had an idea: We knew that free all-advertising tabloids called pennysavers were distributed in stores throughout Syracuse. We figured that if we blanketed the Syracuse University campus with a similar publication we could attract advertisers who coveted the student market but who weren’t advertising in the Daily Orange student newspaper.

We didn’t have a well-reasoned business plan. And we had no real-world business or journalism experience. We did have, however, lots of youthful ambition, energy and enthusiasm. We decided to call our planned publication The Orange Pennysaver in order to leverage the name recognition that the city pennysavers already had with local advertising prospects.

The idea had traction. We convinced about 40 advertisers to sign up and on Feb. 4, 1969, we published an eight-page inaugural issue. Five more biweekly issues followed before the summer break. Each 16-page tabloid was jammed with ads and a bit of amateurish editorial content. After the sixth issue, Jack left for a real job and I decided to carry on solo.

When SU opened for the fall 1969 semester, I continued to publish every other week. As ad sales increased, so did the editorial content, mostly covering music, movies, art, food and drink, politics, the Vietnam War, drugs and sex.

I was 21 and it was an exhilarating time. My increasing hours at the paper forced me to drop out of my Newhouse graduate sequence, which led to the loss of my education draft deferment. I subsequently received a 39 in the new draft lottery. There was no question that I would be drafted.

By that time, I was, like many of my peers, anti-Vietnam War. I wanted to continue publishing the paper, so getting drafted or moving to Canada was not an option. I went to the National Guard armory downtown to see if there were vacancies. To my surprise, there were. I signed up on the spot.

Next, I had to figure out how to keep the paper going while I was in basic training for four months. Luckily, my friend Dane Hahn agreed to manage the paper during my absence and we published seven more issues out of my apartment at 200 Euclid Ave.

I continued to write a column for the paper while away, mixing serious issues with wise-ass comments. “Hello, all you hippies, freaks, commies and other civilians!” led the column written on the plane taking me to basic training. The country was polarized; student protests and strikes were becoming more frequent. The times were changing and so was The Orange Pennysaver, as more editorial space came to be dominated by the war, student power, gender and racial issues, the environment, the arts and alternative lifestyles.

I was eager to complete basic training in mid-May. Then on May 4, 1970, during an anti-war protest at Kent State University, four college students were killed and nine injured, shot by Ohio National Guardsmen during a protest strike.

That was it for me. I decided I had to get out of the guard. A few days after the Kent State massacre, I went AWOL on base, having left barracks without permission. I went to the base’s independent restaurant and sat on the patio eating a pretty good steak-and-potato lunch.

I was thinking about Kent State and my six-year military obligation when the radio station on the restaurant’s patio speakers started playing Creedence Clearwater Revival’s “Who’ll Stop the Rain.”

At that moment, the song crystallized for me emotions that changed my life and solidified the paper’s journey. I would do everything I legally could do to get out of the military. And I determined to remake The Orange Pennysaver into a progressive citywide alternative to Syracuse’s conservative media outlets.

The first order of business was to rename the paper. I settled on The Syracuse New Times, sketching it on the Department of Defense envelope containing my active- duty discharge papers. The second was to publish weekly, rather than every other week and increase free distribution citywide. I couldn’t wait to get back to town to start this new phase. Four months later, on Sept. 17, 1970, the first issue of the Syracuse New Times weekly appeared, a hefty 64 pages.

The demise of Walt Shepperd’s great Nickel Review that summer had left alternative journalism in the city to us. We were ready. Several New Times stalwarts first came on board that year. Former Nickel Review film critic Doug Brode’s column “Film Rap” and SU student Mike Greenstein’s “Rip-Off” column started in that first September issue. A few months later, I was elated when Review editor-owner Walt Shepperd started writing “Conjuring a Counter-Culture” for the paper. Later that year, I made Mike managing editor and then editor in September 1971, the first of his two stints as top editor.

That year set the journalistic path that the paper would take for the rest of my tenure, and beyond. We were open to new ideas. Politics, culture and the arts, alternative lifestyles and the environment continued to be our focus. We connected with our readers in a powerful way, reporting on previously neglected communities and issues. We were independent and brash. We celebrated grassroots initiatives and spoke truth to power. We did it with wit and had a singular perspective, rhythm and style. We were on a mission to inform, entertain and provoke our readers. And that we did.

It was a steep learning curve for me, with 80-hour weeks common. Everyone worked hard. The production staff and editors often stayed up all night producing the paper on deadline — the analog way, with offset headline strips, copy galleys, photo halftones and ads, all pasted down on page flats with melted wax.

Those first 11 years are burned into my memory forever. We were young and we were blessed to get to do what we did. Countless talented journalists, artists and others worked at the Syracuse New Times or contributed to its pages, moving on to successful careers elsewhere; others became mainstays at the paper and pillars of Syracuse journalism.

That the publication has survived for 50 years is amazing. I am proud that the Syracuse New Times is the oldest surviving alternative newspaper in the country still in print. I hope that it can hold on to that title for years.

The truth is, however, that our favorite alt-weekly is at risk, challenged by the same digital forces and lifestyle changes that have shrunk or killed so many newspapers. It’s a great time to show your support for this venerable alternative newspaper.

As the early 1970s New Times mascot Fat Igor would say, “Can ya dig it?” I hope you can. Now subscribe.