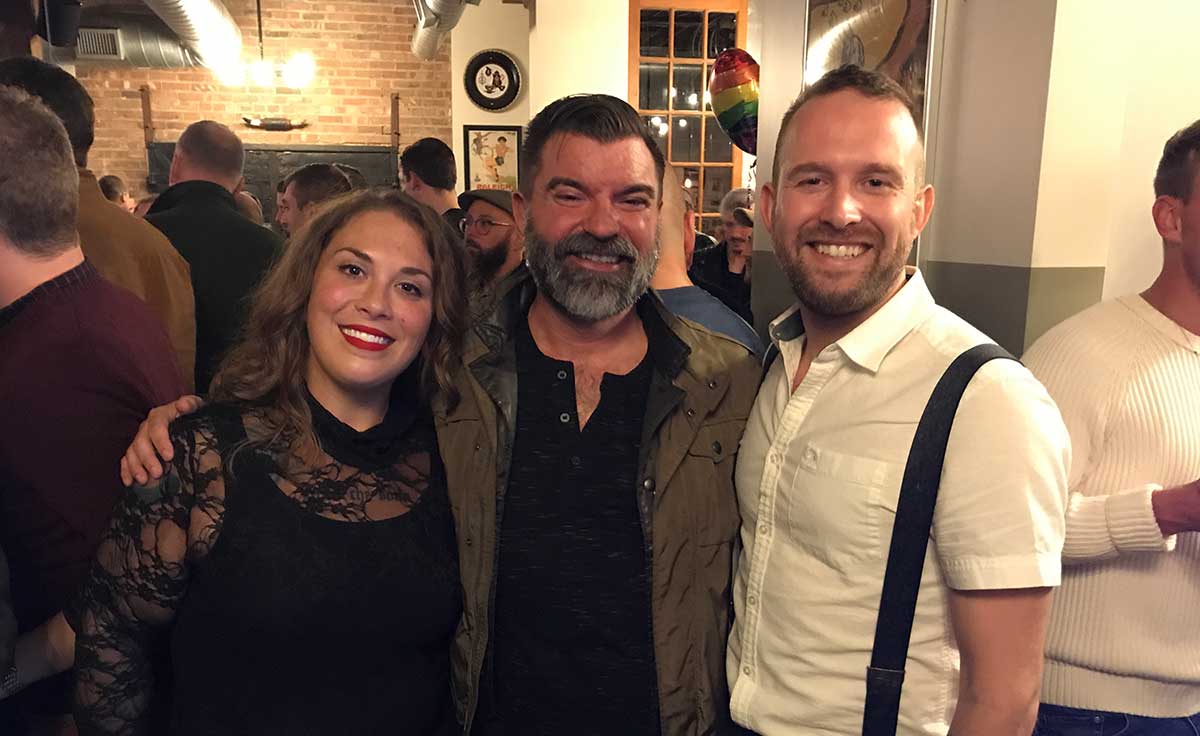 The Guerrilla Gay Bar, a pop-up LGBT event, aims to fill the space left vacant with the decline in dedicated LGBT bars in Syracuse.

During a cold night at the Mello Velo bicycle shop and café on Canal Street, a young woman carries a bunch of rainbow metallic “Happy Birthday” balloons across the patio and into the bar, where she sets them on a table alongside cookies and cupcakes. The bar is buzzing with noise and energy, and it’s hard to move through the throng of 100 or more people.

Standing by the balloons is Tanner Efinger. Tall with light brown hair, he wears suspenders to complete his look. With a wide smile, he announces, “It’s the one-year anniversary of Syracuse Guerrilla Gay Bar!”

It’s not a physical venue, however. Syracuse Guerrilla Gay Bar is a meet-up group that converges at a monthly pop-up event connecting the queer community for social networking and visibility. The chosen venue may be a dance club, bar or restaurant, but remains a secret — even to the venue — until noon that day.

The concept of LGBT meet-ups has become a growing trend over the last decade. These groups typically start in an online forum or app and move to a physical venue. Websites like meetup.com host thousands of LGBT groups around the world to connect like-minded people for various activities. While real-world social networking remains the goal, the intermediary has changed from a brick-and-mortar gay bar to an app on your phone.

Miguel Jose Ruiz, a 21-year-old Syracusan who identifies as part of the LGBT community, can attest to this shift. “I grew up in the generation of the Internet. There’s always a community if you take the time to look for it online.”

Many blame the decline in gay bars on the rise of social media. Through the end of the 1970s, however, these bars were thriving; in Central New York, they acted as way stations for groups traveling to New York City for the weekend. Over the years, Syracuse has been home to as many as 10 gay bars.

Bob Forbes, president of the CNY Pride Festival, moved to Syracuse in 1987. He noted that several gay bars shut their doors during his first year in the city, with more closures that followed. Only a handful currently remains in Syracuse, including Trexx, 323 N. Clinton St.; Rain Lounge, 105 N. Geddes St.; and the Wolf’s Den, 617 Wolf St.

“I’m 56,” Forbes explained, “I saw the need (for gay bars) when I first came out. That was the only way I could meet people because there weren’t even computers, there weren’t apps, there wasn’t anything.”

Now people largely venture to gay bars only for specific shows, departing at the end of a performance. Additionally, the increased acceptance of the queer community over the last decade has caused many gay bars to close their doors due to competition with “straight” bars. When the entire city feels safe, these places no longer act as social sanctuaries.

“(My husband and I) walk around downtown Syracuse and go to restaurants and everything,” says 33-year-old Michael Battles. “Everywhere you go, you see stickers in the windows that say ‘All welcome, genders, sexual orientations; we support you.’ You’ll see rainbow stickers in businesses across Syracuse.”

Battles can attest to the change in treatment and acceptance of the queer community over the last decade through the lens of the U.S. military. “I’ve been in a military where I’ve been allowed to be gay for five years now, legally. I served before ‘Don’t Ask Don’t Tell’ (was repealed),” says Battles, referencing the policy that allowed gay Americans to serve in the military as long as they remained closeted.

“I never felt comfortable going to any place other than a gay bar,” Battles continues. “But the college kids that are coming up these days, they don’t know any of that life. They know that ‘I can go anywhere and I’ll be fine.’ I think the whole issue (for the business of gay bars) is that people are going to any bar now; they don’t go to a bar because it’s a gay bar.”

The secrecy of Syracuse Guerrilla Gay Bar is precisely how the group gained traction. Just 10 years ago, the country’s social and political climate was different, and gay bars were a space where people in the LGBT community could feel safe. At the time, these bars were more secretive; some didn’t even have windows. Now the community can be seen and heard without fear of persecution.

Guerrilla Gay Bar co-producer Ariel Servadio explains, “We wanted to be in the visible, public space. The goal isn’t to have a private party for gay people. The goal is to be in front of everyone in this restaurant, interacting with the general public, and letting the community of Syracuse see how many queer people are here.”

Using social media as a way to attract the LGBT community to physical events, Syracuse Guerrilla Gay Bar’s Facebook group has grown to 1,000 members since its inception in October 2017.

“Diversity is never an endpoint, it’s always a conversation,” Efinger notes. “We’re really launching a movement, not only inspiring our community to get together but inspiring others to put intention behind the diversity.”

As a result of events produced by Syracuse Guerrilla Gay Bar, additional groups have started in Watertown, New York, and Burlington, Vermont, as attendees from these areas were inspired to carry this movement to their hometowns.

Meanwhile, Efinger is harnessing the growing power of Syracuse Guerrilla Gay Bar to launch a new venue: Wunderbar. The German word for “wonderful,” Wunderbar (pronounced “voon’-da-ba”) will move into the space of the former Redhouse Arts Center at 201 S. West St.

This “queer bar,” which will be open to people of all orientations, will act as a casual bar serving light fare during the day, with stage performances at night. Wunderbar plans to open its doors soon, with Efinger ensuring there’s room at the table for everyone.

“Traditionally, the word ‘queer’ is far more inclusive,” Efinger explains. “Not only within the LGBTQ rainbow, but also for people who don’t necessarily identify as queer but who are (supportive of) queer visibility. We’re exploring how we send that message of positivity and energy to everyone — because the theater itself isn’t a queer theater, right?”