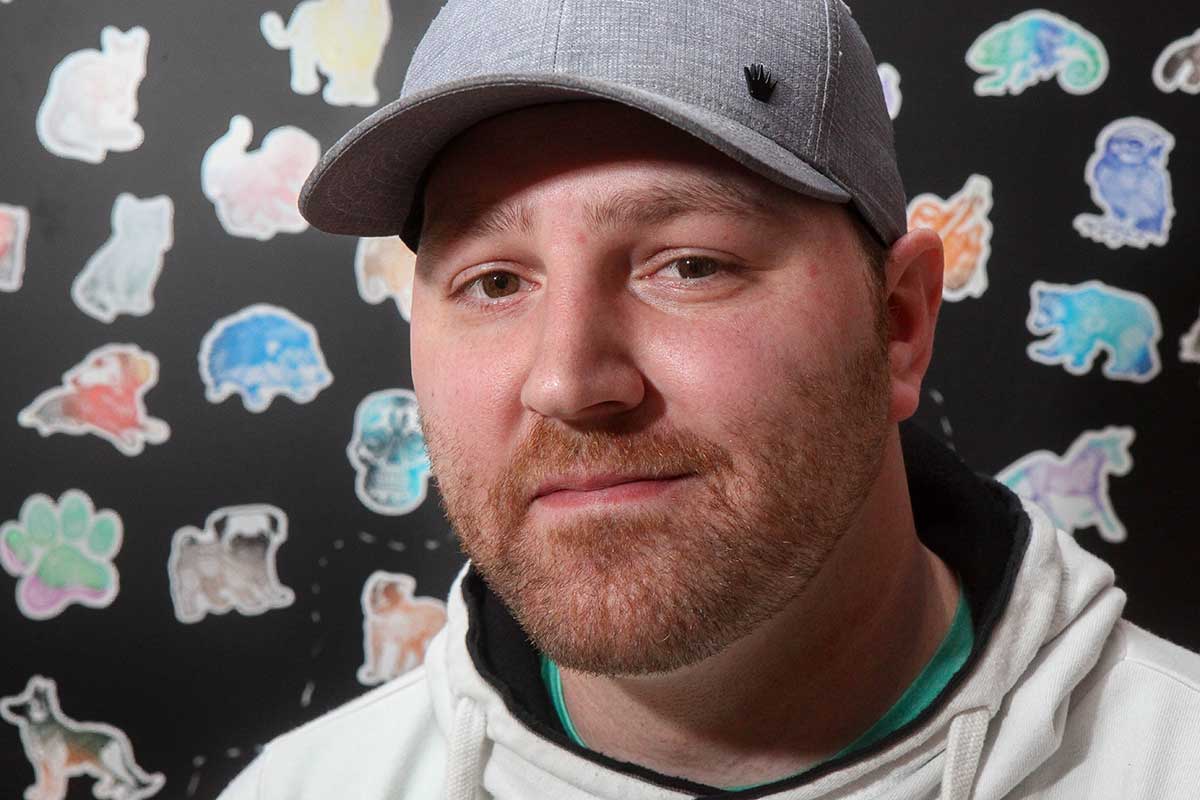 The Zentangle Method is an art form of relaxation, calling on artists to weave structured patterns as a form of meditation.

What makes an artist? Is it inherent in the bones, like height or eye color? Or is it something that grows, like green plants in the springtime? For independent artist Dan Bingham, it’s a little of both.

Now a board member at creative shop Wildflowers Armory on Armory Square, Bingham said his talent for art came early, but it was the guidance of his schoolteachers that helped keep him on the path.

A Syracuse boy since childhood, Bingham grew up in Eastwood, attending Huntington Pre-K-8 School and later Henninger High School. It was at the Syracuse City School District that he first sparked an interest in art.

“One of the first times I was like, ‘Maybe I really got something here,’ I was in the third grade and we had free time and I chose, for some reason, to sit down in front of our pet rabbit we had in the class and draw it out,” Bingham said. “When I showed the teacher, she said, ‘Wow, how did you even do this?’”

In middle school, his art teacher offered to give him extra one-on-one classes, fostering his artistic growth and learning more techniques.

“I never forgot that,” Bingham said. “And I continued to have strong art teachers as I went into high school at Henninger.” The pen and ink piece “Among the Leaves” is the one Bingham said he’s most proud of. Because of the immense detail, it took months to complete.

Bingham continued his passion at Syracuse University, getting a degree in Visual, Performing Arts and Education. This allowed him to combine his artistic background while passing the craft on to a future generation — much like his teachers did for him. Bingham began working as a substitute teacher, but made a change around 2013.

“Art had always been my thing, and it was sort of like my comfort zone,” Bingham said. “I always had that urge to create something throughout most of my life. I realized it was something that was really important to me. Whether I focused on it or not, it was always with me.”

Bingham, like many fledgling artists, said he was hesitant to put his work out into the public; you never know how people will respond to it, or how your work will hold up next to the other talent on display. But after connecting with Isaac Bidwell, another Syracuse-area artist who runs the Pickled Punks Plush art shop, he decided to showcase with him and other local artists at Tymeless Tattoo in Baldwinsville.

That first show six years ago led to several more shows each year, as Bingham eventually set up shops at art markets, working with Adapt CNY, joining a show at the Gear Factory — anything to intermix with the Syracuse art scene.

Having time to think between teaching gigs, Bingham decided to go for it. He got a website and started pushing his art on social media. He began selling his works. And while his background was in more detail-oriented fine arts, a surprising new style began catching people’s eyes: Zentangle. Bingham stumbled on Zentangle when looking for art projects for his students.

The Zentangle Method is an art form of relaxation, calling on artists to weave structured patterns as a form of meditation. Trademarked by Rick Roberts and Mary Thomas in 2003, the method is popular worldwide for stress reduction and therapy, according to Psychology Today.

Bingham stumbled upon the method when looking for new projects to use in the classroom. He began using it in his day-to-day life between his more strenuous and detailed art pieces.

“What started as my in-between sketch time project really took off, and I ended up expanding it,” he said.

Almost like a callback to the childhood image of a pet rabbit that kicked off his journey, Bingham incorporated nature into his Zentangle pieces, settling on what can be seen today: an octopus with tentacles of paisley and polka dots, an elephant with Mandala-like patterns on its head and swirls on its feet, a kitten with stripped ears and bands of different shapes representing different tail fur and more.

The pieces are hand-drawn before being scanned and finished digitally, completed over the course of a few days, Bingham said. Each animal is sectioned out by shadow and shading, and a pattern is chosen based on what will replicate the light best: a tighter pattern for a darker space, and an airier pattern for a lighter part of the body.

Bingham has now started traveling out of the area to show his work, venturing to Rochester and Ithaca, with plans to soon set up in Albany. As a board member for Wildflowers Armory, he said it’s exciting to help boost the rest of the artists in the area and build up Syracuse’s artistic energy.

“As a kid, I feel like Syracuse was a little bit quieter with the art scene,” he said. “Even though it was going on, I’ve sensed more of a growth. Rochester and Buffalo have really thriving art communities. That art-infused community, I feel like it’s just starting to blossom here.”