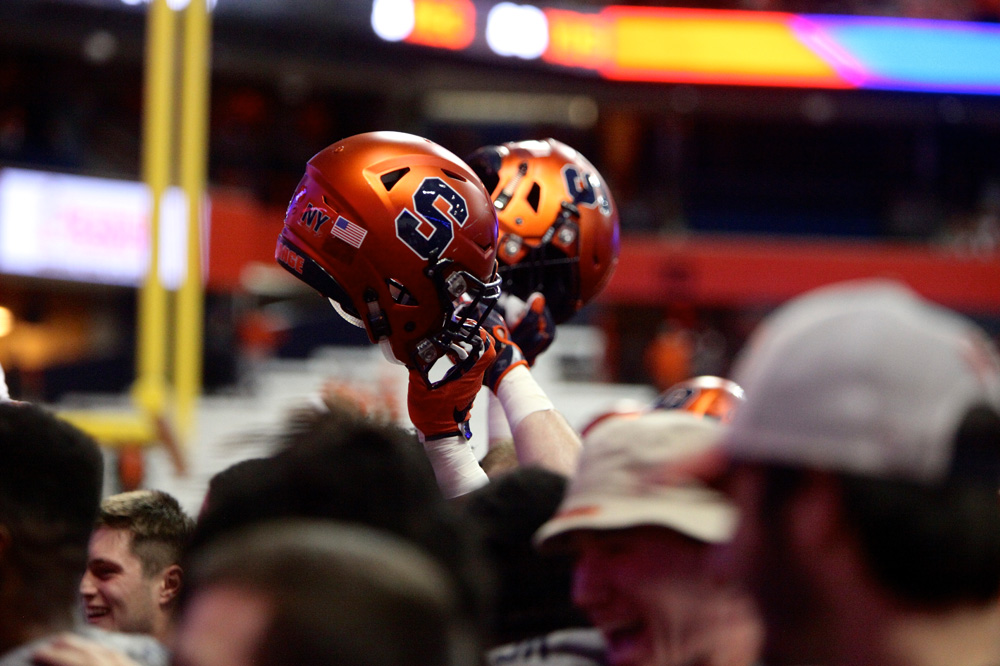 The Orange stun the No. 17 Hokies in much-needed win.

For all of his “belief without evidence” and “the cake is still baking” rhetoric about taking a long-range view, first-year Syracuse University football coach Dino Babers knew he was at a crossroads in the week following the Orange’s disappointing 28-9 loss at Wake Forest Oct. 8.

That’s why he challenged his players to stop pointing fingers and start using those fingers to make a fist and fight through their adversity. The result: A stunning 31-17 win over No. 17 Virginia Tech Oct. 15 at the Carrier Dome that one day may be seen as the first building block in the SU football renaissance. “The biggest thing about this win is that anytime you take over a new program, you’re trying to get everybody to buy in, to work as one,” Babers said. “No matter how hard everyone wants to do that, there’s always the naysayers, there’s always those ones that say, ‘Hey, maybe we should be doing it the way the old team did it, or the old coaches did it.’ It’s always that way, until you get that one win that solidifies you, that brings you together, that hardship that brings the family closer together.

If you want to get a better idea of what Babers was talking about and haven’t seen it yet, go online and find Babers’ “Brother Love’s Traveling Salvation Show” post-game speech that was captured by ESPNU. Babers starts calmly, but by the end his players are jumping up and down in sheer bliss. In another video of Virginia Tech coach Justin Fuente’s post-game news conference in the hallway behind the locker rooms, you can hear the SU players celebrating while Fuente tries to explain how Virginia Tech lost to a three-touchdown underdog.

“A lot of people doubted us in this game. You could see it in the sidelines and on the field,” said Orange senior defensive end De’Jon Wilson, who recovered a fumble and recorded SU’s only sack against the Hokies. “But what we had on the field was electric and energized the crowd, so that’s what we need.”

And to defeat a Virginia Tech team that had outscored its last three opponents by a combined 132-20 score — including a 34-3 blowout of then-No. 17 North Carolina at the same time Syracuse was laying its egg at Wake Forest — the Orange also needed to show a toughness and resiliency that we hadn’t seen from a SU team that had been outscored 54-13 in the fourth quarter this season by every team not named Colgate.

Here are some key moments where SU fans expected the worst, yet the Orange fought through the adversity:

Leading 14-3 early in the second quarter, the Orange had a first-and-goal from the Hokies’ 1-yard line and failed to score as quarterback Eric Dungey tossed three incomplete passes and then was stuffed inches from the goal line on a keeper.

Even if you didn’t know that Virginia Tech’s vaunted “Lunch Pail Defense” was ranked among the national leaders in every key statistical category, you probably had a feeling after that sequence that the Hokies were about to turn the game around. But the beat-up and much-maligned Orange defense forced Virginia Tech to punt on the next possession, erasing the momentum shift from that goal-line stand.

“For the defense, all week coach has been saying, ‘Why not us?’ This entire week he kept drilling in us, ‘Why can’t we be great?’ I felt that guys really took that to heart this week and we came out feeling like we had nothing to lose, so we left it all on the line today,” Wilson said.

Dungey, who banged up his right knee in the first quarter, had to leave the game after being tackled and landing hard on the knee with about five minutes left in the second quarter. The Orange had a third-and-10 from the Hokies’ 28, but miscommunication between center Colin Byrne and backup quarterback Zack Mahoney resulted in a fumble and an 8-yard loss. Kicker Cole Murphy’s 53-yard field goal attempt was low and perhaps partially blocked and SU failed to build on its 14-3 lead. Dungey, however, returned to the game late in the first half and directed a two-minute drill that resulted in Murphy’s 51-yard field goal and a 17-3 halftime advantage. Despite his sore knee, Dungey completed 28 of 53 pass attempts for 311 yards and one touchdown and rushed 24 times for 106 yards and one score against a Virginia Tech defense that was allowing an average of 237.6 yards per game.

“He did a good job escaping pressure and throwing on the run,” Hokies defensive end Ken Ekanem said. “We put some hits on him and he kept coming back. You’ve got to respect a guy like that.”

Trailing since SU scored two minutes into the game, the Hokies showed some resilience of their own by tying the score at 17 on a touchdown and two-point conversion early in the fourth quarter. Again, this is where SU fans have grown accustomed to watching the game slip away, but not this time.

Following Virginia Tech’s game-tying score, Dungey directed a 17-play, 75-yard touchdown drive that included SU’s fourth fourth-down conversion of the game: a 5-yard pass from Dungey to wide receiver Erv Phillips on fourth-and-2 from the Hokies’ 37. Dungey capped the drive with the 1-yard touchdown plunge he couldn’t get in the second quarter.

At that point, the only order of business was the celebration as SU students rushed the field following the Orange’s first win over a top-25 team since a victory over No. 11 Louisville in 2012 at the Dome. The Orange had lost 12 consecutive games to top-25 teams.

“For (the SU players) to be able to experience that celebration when the security guards let everyone on the football field, I thought that was great. That’s what college football is all about: that excitement, that energy, it’s so pure, it’s so honest,” Babers said. “Anytime when you’re young, 18- to 22-years-old, and you have an opportunity to experience something like that, it’s going to always be special, and always something that is going to stay with you for a very long time.”

The cake is still baking, and with Clemson, North Carolina State and Florida State on the Orange schedule following the 12:30 p.m. game at Boston College on Saturday, Oct. 22, it’s still unlikely that the 3-4 Orange finish 6-6 and qualify for a bowl game. But the Orange players now know that Babers’ system can work, and that may be the most important ingredient to the ongoing reconstruction.