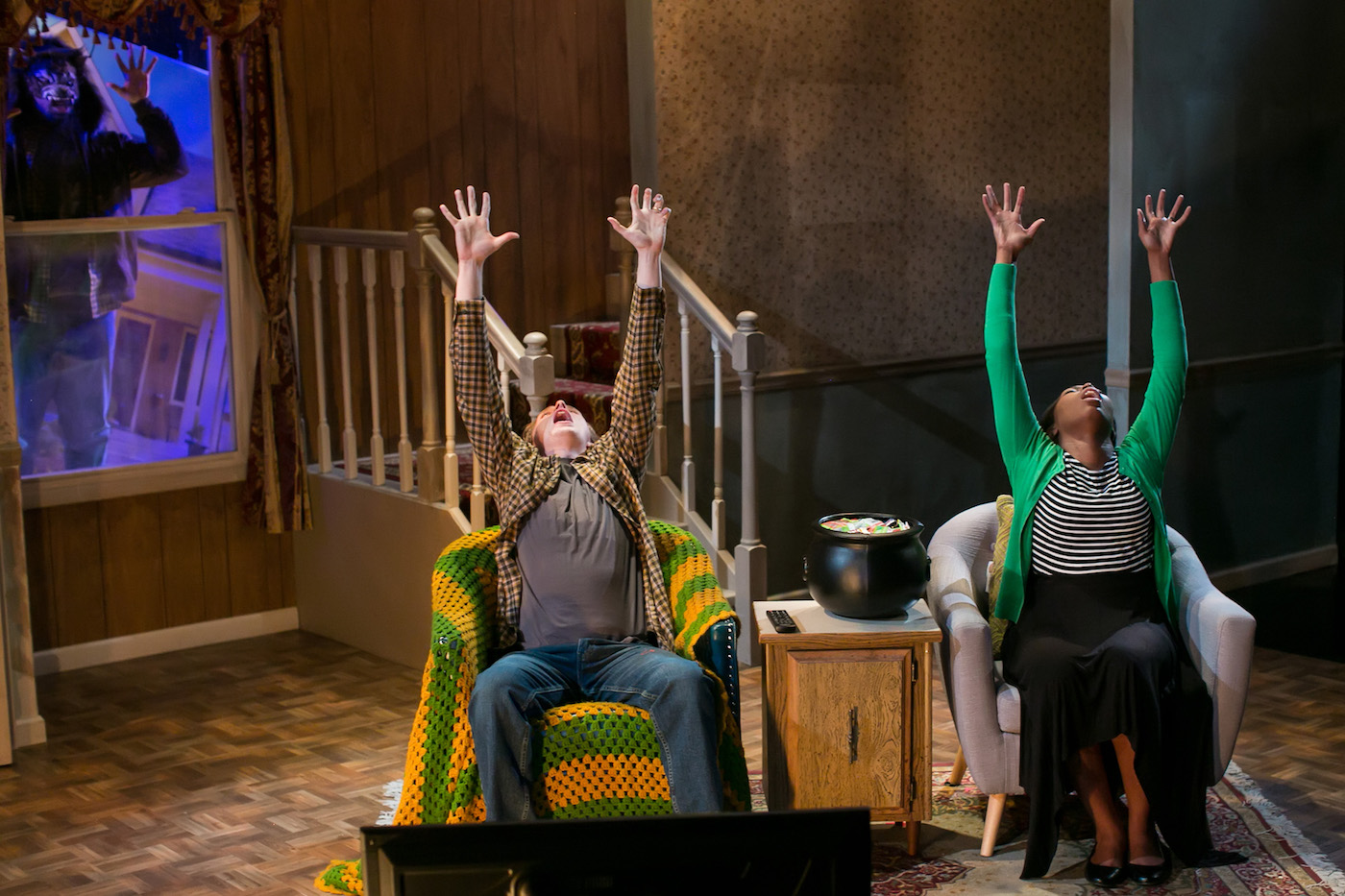 M. Jones’ 70 Scenes of Halloween is set in a shabby suburban living room on Halloween night with a steady stream of kids ringing a loud doorbell. It’s made up of short, itemized bits separated by blackouts, whose numbers are called off by an officious Stage Manager (Donovan Stanfield). But sometimes the numbers come out of order, meaning we’re supposed to tell — from costume changes, among other things — that the scene we’re watching came before the one that preceded it.

Much of this show, running through Sunday, Oct. 29, at the Redhouse Arts Center, is indeed unpredictable. It begins as a domestic melodrama. The suburban couple at the center of the action, Jeff and Joan, has been married for nine years, and things aren’t going well. Simply trying to find some candy corn turns into a shouting match. At this point in the action, serious movie buffs in the audience will remember that Norman Bates munches the same candy in Psycho.

The couple try to watch a television that broadcasts mostly old movies, along with The Twilight Zone. Before the first act ends, we also realize that four actors on stage are actually playing Jeff and Joan, only in different scenes. Wait, there might actually be four characters instead of two, although it is prudent to withhold credence. Perhaps Jeff and Joan are being menaced by a massive Beast wearing a mask, who either enters through a closet or appears in a window. Ditto for a Witch in a false nose and a pointy hat. Or maybe they aren’t.

Visiting director Jennifer Vellenga, a woman with glowing international credits now on the faculty at Kansas State, makes casting a part of 70 Scenes’ interpretation. Jeff and Joan are played by two newcomers: Gavin McNicholl, the only Equity player in the show, who indeed has the most to do, and Whitney Andrews, a recent University of Connecticut graduate.

For the Beast and the Witch, Vellenga has chosen Stephfond Brunson and Marguerite Mitchell, two Redhouse regulars and Syracuse New Times Syracuse Area Live Theater (SALT) winners with strong local fan bases. So what are we to make of their later taking the roles of Jeff and Joan? Are the Beast and the Witch actual fear-inducing visitors or are they projections from Jeff and Joan?

In interview playwright Jeffrey M. Jones acknowledges that 70 Scenes is at least partly autobiographical, as he drew from his own stale 9-year-old marriage. The main character is, um, named Jeff. Yet the play keeps impersonating a horror thriller, with familiar chords from Bernard Herr-mann’s scores for Psycho and Vertigo. Several times a menacing arm holding a knife thrusts in from a corner, usually a red herring. Really red, however, is the stage blood that drips from slats in the closet door when it is attacked by a knife-wielder.

Meanwhile, Jeff and Joan’s TV seems to be turned to Turner Movie Classics during fright month. Among the most recognizable clips is Colin Clive’s wail, “It’s alive,” from James Whale’s Frankenstein (1931).

The comedy of 70 Scenes leans more toward absurdism than to funny-ha-ha, while the play owes much to Eugene Ionesco. Jones’ best-known work, 70 Scenes of Halloween was published in 1990 and has been performed sporadically since, often in small, edgy venues like the Redhouse and in college towns.

Playwright Jones was once the manager of the Wooster Group, the New York City experimental theater partially founded by Willem Dafoe. Wooster has long been associated with the kind of post-modernism we see throughout 70 Scenes, as when successive scenes play the same words over again, slightly changed or from a different point of view.

Vellenga’s direction well exploits the intimacy of the Redhouse, which opened in a converted flophouse in 2004. Old hand Tim Brown’s set feels like a B-movie. Vellenga makes all the players look great, especially Gavin McNicholl as Jeff McNicholl gives the most varied performance, eliding from snarling madman to angel.

Meanwhile, Marguerite Mitchell and Stephfond Brunson defy their received personae. Charming, almost cuddling in his curtain speech, Brunson morphs into a lethal intruder on the same stage about a half-hour later. SNT