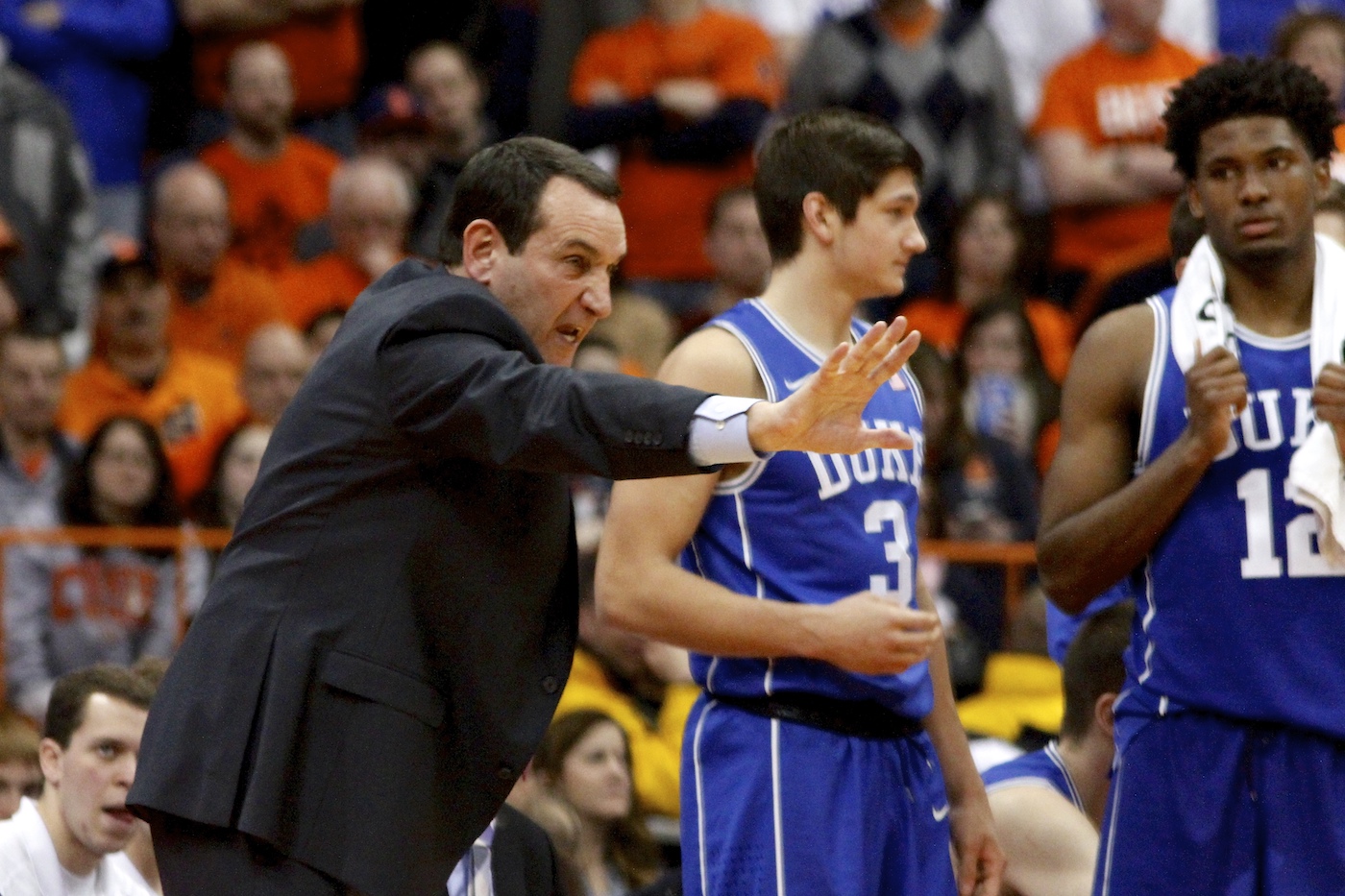 SU has no choice but to defy the odds, again.

When legendary Duke University men’s basketball coach Mike Krzyzewski was ready to return to the sidelines earlier this month after recovering from back surgery in early January, the official Duke basketball account announced his return by tweeting a photo of Krzyzewski with a not-so-subtle hashtag: #HereComesDuke.

The Blue Devils have been rolling since Coach K’s return, and now, for better or worse, #HereComesDuke into the Carrier Dome on Wednesday, Feb. 22, 7 p.m.

No. 10 Duke (22-5, 10-4 in the Atlantic Coast Conference) will take a seven-game winning streak into the Dome for its game against the Syracuse Orange in the first game of an ESPN doubleheader featuring four Hall of Fame coaches (Krzyzewski, Syracuse’s Jim Boeheim, North Carolina’s Roy Williams and Louisville’s Rick Pitino). The Orange (16-12, 8-7) is reeling with three consecutive losses, so think what it would mean to this area’s collective psyche if Syracuse could knock that smug hashtag right off Duke’s Twitter account.

If that possibility doesn’t get you fired up for the game, here are five other reasons that might:

Clash of the Titans: Wednesday’s game will feature the first time in college basketball history that two coaches with 1,000 or more wins will face each other. That’s right: First. Time. Ever. And it’s happening right here in Syracuse.

Krzyzewski is the all-time leader with 1,065 wins. Boeheim has 1,001 wins with an asterisk; that total includes the 101 wins vacated by the NCAA because Syracuse violated NCAA rules. Still, it’s a monumental matchup, made more intriguing by the fact that Krzyzewski and Boeheim are close friends and Boeheim served as Krzyzewski’s assistant coach for three gold medal-winning U.S. Olympic teams.

The Player (and Team) We Love to Hate: Duke guard Grayson Allen has kicked opponents, shoved an opposing assistant coach, had an on-the-bench meltdown and has joined Christian Laettner, Bobby Hurley and a host of others on the long list of Duke players we love to hate. Krzyzewski came under fire earlier this season when Allen’s “indefinite suspension” for kicking an Elon player on Dec. 21 lasted just one game, an ACC loss to Virginia Tech.

And we can’t forget what Coach K did following a Jan. 23 loss to North Carolina State, while he was still on medical leave. An irate Krzyzewski held a meeting at his house and told his players they were temporarily banned from their own locker room and forbidden from wearing any Duke apparel.

Krzyzewski was criticized for that, too, except the Blue Devils haven’t lost since. Damn you, Krzyzewski!

The Crowd: It’s a midweek game, so it’s unlikely the crowd will equal the Carrier Dome record. But it’ll be interesting to see if the attendance comes close to the two previous Duke games at the Dome, which were sold out and set the NCAA on-campus attendance record with crowds of 35,446 on Feb. 1, 2014, and Feb. 14, 2015.

The Game: Duke and Syracuse have met five times since the Orange joined the ACC, and there has been only one clunker so far (a 73-54 Blue Devils win at Duke in 2015). There have been three classics: Syracuse’s 91-89 overtime win in 2014 at the Dome as the Orange overcame Rasheed Sulaimon’s game-tying 3-pointer that went through the net as time ran out; Duke’s 66-60 win at Cameron Indoor Stadium later in 2014 that featured Boeheim’s first ejection from an official game in his then-38-year career as he famously whipped off his jacket after arguing a late-game call; and Syracuse’s 64-62 win at Cameron last season thanks to a 20-rebound effort from — remember this guy? — Tyler Roberson.

What It Means to Syracuse: By all accounts, Syracuse is at best on the bubble for an NCAA Tournament berth. With Duke Wednesday and a game at No. 7 Louisville Sunday, Feb. 26, the Orange is staring at a five-game losing streak heading into its regular-season finale against Georgia Tech March 4 at the Dome. And, while you’re still steaming about that moving screen call on Roberson, don’t forget Georgia Tech stifled the Orange offense for most of the Sunday, Feb. 19, game before hanging on for a 71-65 win.

Last year, the Orange lost four of its last five regular-season games and its first ACC Tournament game but still made the NCAA Tournament on the strength of some notable non-conference and ACC wins. This year, Syracuse can’t afford a 1-5 or 0-6 finish because it doesn’t have any significant non-conference wins, and its two biggest ACC wins over Florida State and Virginia aren’t looking quite as big as those two teams have slumped.

Since the Orange has played far better at home than on the road (14-3 at the Dome, 2-9 on the road or neutral courts), Duke represents Syracuse’s last best chance to notch a quality win for its tournament resume.

As of Monday, tickets for Wednesday’s game were still available. They can be purchased online at Cuse.com, by phone at (888) DOME-TIX, or in person at Gate B at the Carrier Dome.

The No. 20 Syracuse women’s basketball team set a team attendance record Sunday in an 85-80 loss to No. 5 Notre Dame. The crowd of 11,021 eclipsed the previous record for an Orange women’s game by more than 6,000.

Syracuse (18-9) led for most of the game before the Irish (25-3) rallied to snap the Orange’s 18-game home winning streak. Syracuse senior guard Alexis Peterson had 19 points and tied her career high with 14 assists for her seventh double-double of the season.

“It was a great crowd and a major moment for our program to have that kind of support,” Orange coach Quentin Hillsman said.

The Orange has one regular-season home game remaining against Wake Forest on Thursday, Feb. 23, at the Dome before closing its regular season at Pittsburgh Sunday, Feb. 26. The ACC Tournament will start Wednesday, March 1, at the HTC Center on the campus of Coastal Carolina University in Conway, S.C.